Texas Has a Whorehouse In It 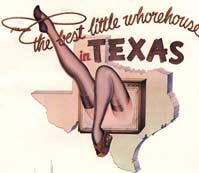 Over a period of some thirty years, what had been a little noticed 'Chicken Ranch' became the most famous Texas landmark since the Alamo. It could not have ended otherwise. The story had sex, sleaze, crooked politicians, country music, and a slick, flamboyant reporter from Houston out to make a reputation. Marvin Zindler is remembered for 'shutting down the Chicken Ranch' but also for championing consumers and 'little guys'. The story began in 1973 when Zindler got an anonymous tip that 'something dirty was going on' in La Grange, TX, a little country town about 60 miles east of Austin. The famous 'Chicken Ranch', immortalized as 'The Best Little Whorehouse" in Texas, dated back to 1915. It was little more than an old farmhouse on 12 acres but it had special status. It was protected by the local Sheriff T. J. Flournoy, who was later portrayed in film by Burt Reynolds. Following is the film synopsis.

Shy and Amber arrive at Chicken Ranch knowing full well what goes on there. They've been used, had hard luck, and are lonely. They confide to Miss Mona that they have never done anything professional but plead for the chance to get some money together for a fresh start. Mona is taken with their honesty, hires them on, and sees to their training. She can use the extra help for the upcoming Texas Aggies/ Longhorn football-game party.

The alumni associates of each school traditionally treat the winners of the annual rivalry to a night of frolicking at the Ranch. Some important political and business leaders are involved, too. (Miss Mona always has the right people to call on for advice). Things are pretty much as they have been for 58 years-until Melvin P. Thorpe, a Houston TV reporter and do-gooder, sets out to spoil everybody's fun. His Watchdog exposés do little to prompt Sheriff Dodd to close the Chicken Ranch. In fact, when Melvin visits the Ranch, Sheriff Dodd runs him off. It seems there is a romantic interest between the sheriff and Mona.

In retaliation, Melvin raids the Ranch with his camera crew. The surprise visit proves embarrassing for all the above. Chicken Ranch is now too public to remain open in face of the state law against prostitution. Melvin P. Thorpe wins again. 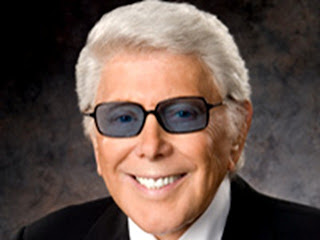 The girls ponder their futures as they await the bus from Amarillo. Mona and Sheriff Dodd pause for a moment of nostalgia before locking up after the girls have gone.

The Guide to Musical Theater, The Best Little Whorehouse in Texas

In real life, 'Melvin' was the very real Marvin Zindler, who became legendary for his crusades against dirty restaurants ('The Rat and Roach Report'). Sheriff Dodd was, in real life, Sherif T. J. Flournoy whose confrontation with Marvin Zindler was filmed and broadcast on the ABC affiliate in Houston --KTRK-TV, Channel 13. This was pretty rich stuff, even by Texas standards. The episode made living legends of both Zindler and Sheriff Flournoy. Marvin Zindler's passing last year was covered by the New York Times.

Marvin Zindler, 85, Crusader in ‘Whorehouse in Texas’ Case, Is Dead By RALPH BLUMENTHAL Published: August 2, 2007 HOUSTON, July 30 — Marvin Zindler, an antic and a populist television crusader here who became known nationally when he had “the best little whorehouse in Texas” closed on corruption grounds, died here on Sunday. He was 85. The cause was pancreatic cancer, according to his station, KTRK-TV, an ABC affiliate. Mr. Zindler, with his cheerfully admitted plastic surgery, closet of peacock fashions, blatant hairpieces and blue-tinted glasses, was best known for his first foray into investigative journalism, in 1973. He exposed a widely tolerated bawdyhouse known as the Chicken Ranch in La Grange. The case was the basis for the musical and movie “Best Little Whorehouse in Texas.”

In 1973, at the age of 51, Mr. Zindler began his career at KTRK. Exposing the La Grange brothel quickly caught his interest, he later recounted, because the local authorities allowed it to operate and Texas officials deferred to them. But he had an ally in the state attorney general, John Hill, who slipped Mr. Zindler investigative reports. Gov. Dolph Briscoe then moved swiftly to close the Chicken Ranch, making Mr. Zindler a star, although, he said, he did not much care for his film portrayal by Dom DeLuise, as Melvin P. Thorpe. Eventually, Mr. Zindler earned $1 million a year as the KTRK celebrity newshound. --New York Times

Everyone living in Houston at that time remembers Marvin's signature sign off: "Maaaaaarvin Zindler, Eyeeeeeeeeeeee-witness News!"

Although he was best known for setting off the political firestorm that closed down the famed Chicken Ranch bawdy house (subject of The Best Little Whorehouse in Texas and ZZ TOP's "La Grange"), Zindler's "Action 13" segments on KTRK typically focused on more mundane matters like setting things right for "little guys" wronged by businesses and bureaucracies. His weekly report on area restaurants that had failed health inspection made "Slime in the ice machine!" a catch phrase.I can't say Zindler's personality-driven excoriations portended good things for TV news in the sweeps-happy Age of Murdoch, but he helped out a lot of people over the years. Houston TV won't be the same without him.

Many believed that Texas would not be the same without a whorehouse in it. But, in fact, Texas has never been without one. Unlike the Chicken Ranch, the Texas legislature still gets away with it. But an age of instant pundits, ratings, and demographic hell will never birth another Marvin Zindler.

In any event, while I was in Houston attending the Fat Free Cream Cheese Industry's Fall Conclave I had the opportunity to see Marvin Zindler, a reporter for Eyewitness News, on local Houston television. Marvin has been a staple of the Houston news scene for about a 57 years. He has a formidable reputation as an investigative journalist, notably breaking the famous Texas Chicken Ranch whore house story. Marvin has a distinctive loud drawl and always wears dark glasses during news broadcasts. The night I saw him he was wearing rather stylish glasses frames with topaz blue lenses, but the ads for Eyewitness news feature Marvin wearing enormous pitch black sunglasses. Marvin has a full head of fluffy white hair, which is brushed straight back from his face, and his face is slightly orange from all of the makeup he has to wear.

At home we have a little segment of the news called “Street Beat” during which the reporter ferrets out awful stuff happening around town that you might not already know about. Marvin ferrets out awful stuff happening around town that you might not already know about, but Marvin does something about the awful subject of the story. The night I watched, Marvin found a family consisting of the mom who has a British accent (you can assume she doesn’t have family in town) and her triplets who were born prematurely about five years ago. I don’t recall where the dad was. One of the little boys has a hole in his neck that never healed after he had a tracheotomy as an infant. Marvin’s cameraman made sure to get a close up of the boy breathing through the dreadful hole in his neck. The poor mother lives in a cottage on the outskirts of town and does not have insurance. The boy’s doctor treats him for free, but she is unable to perform the operation to fix the hole in his neck. By this time I am sure that most of Houston is reaching for its checkbook to help out this unfortunate family, but Marvin does not stop there. The camera cuts to a picture of Children’s Hospital, and the next thing you know, Marvin is in the office of the doctor in charge of everything at Children’s Hospital. Marvin is wearing a black suit, and a black shirt, with a white tie jutting out, or was that his napkin still tucked under his chin from lunch, that he forgot to yank out in his haste to get some help for that little boy? We see Dr. Head of Everything over at Children’s agreeing to fix up the little boy, then Marvin shouts, “MAAARvin Zindler, AHHHHHHwitness News.”

Marvin Zindler's Last Report
Posted by Unknown at 6:19 AM

I have to say, back in my youth when I was running around out west like a sprayed roach (at times) searching for who knows what, would never had thought at the time those would be considered the "good old days" Well, by some part, I stand corrected....(That is to a point, at least from my perspective) Also, were whore houses legal in Nevada yet?

Then again there is something about a Burt and Dolly movie that reeks the seventies... big hats, big cars, big everything else etc. (even though Jimmy C. was desperately trying to get America to down size and mend it's ways)

Of course I am not sure this has much to do with your subject, and to tell the truth, am not familiar with him, but it sounds like Texas just lost another wacky character... And I would add this: I do wonder if Mr. Zindler would have lived this long had he gone after a "Texas mafia" whore house, just asking. I also will add...it must have been tough being that type of a do gooder back in those days. Good story, real seventies lore, no doubt.

oooo....I like to dance a little sidestep, cut a little swath and lead the people on....Great post!

it sounds like Texas just lost another wacky character... And I would add this: I do wonder if Mr. Zindler would have lived this long had he gone after a "Texas mafia" whore house, just asking. I also will add...it must have been tough being that type of a do gooder back in those days. Good story, real seventies lore, no doubt.

Marvin was, indeed, a pretty 'wacky' character and was often criticized --mostly by establishment types who were not nearly as well-dressed as he was. I was never what you would call a 'close friend' but was, nevertheless, friendly with him. The both of us endured many a boring luncheon. Marvin meant well and worked tirelessly for 'poor folk', especially those needing medical attention, especially children needing life saving surgery. I seem to recall a little girl in need of plastic surgey after an accident. Marvin was always involved and not just for the headline value --a lot of what he did was never televised.

Many never forgave his 'closing down' the Chicken Ranch. It was, after all, a part of the Texas A&M mystique. Everyone knew about it but no one dared talk about it openly.

...there is something about a Burt and Dolly movie that reeks the seventies... big hats, big cars, big everything else etc

"...big everything else." I have no idea what you're talking about :)

oooo....I like to dance a little sidestep, cut a little swath and lead the people on....Great post!

Thanks, Zena, and, you know, politics has not changed in Texas. Many more 'politcians' do the 'side step' than cowboys the 'two step'.

LOL Len; don't we know it!? Some of'em danced their sidestep into the white house to abuse their authority.

Good one, Zena! In rertrospect, maybe I should have written: 'Texas IS a whorehouse' Big oil certainly turned it into one. The Bush family were just second tier pimps.