The Mask of Wotan 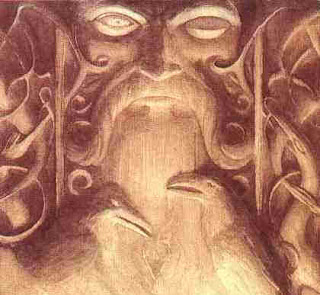 Jung's influence has been keenly felt among screenwriters, novelists, and 'literati' who often speak of a "character's shadow", one of several "archetypes", a mirror image of what writers call the "higher self".

Related to Jung is the work of Russian folk tale expert, Vladimir Propp, who thought of "archetypes" as "masks" deliberately worn by "characters". Masks are worn in both stories and in life for one of two purposes or both: to reveal and/or to hide.

In most cases a benign public mask is worn to hide facets of the personality with which the character has not yet made peace. It is a mistake, however, to equate "the shadow self" with evil. It is merely the hidden self —the object of one's search for oneself. All "quest" stories are symbolic of this process.

In both Propp and Jung, the idea is to peel away this "social facade", this "mask". The metaphor "peel away”, however; suggests that the process is an easy one but that is rarely the case. Masks are the gestalt of one's various defense mechanisms and unconscious anxieties. "Peeling them away" reveals an "authentic self" that is often difficult to reach and more difficult to confront or deal with. Throughout the 50's existentialists and other "beatniks" talked about getting down to one's "real self". Jung believed that this “real self” was the source of vitality and creativity lurking behind a "neurotic shield" —a mask!

Jung was influenced by numerous mystical religions and Taoism where terms like "inner room", "the great void," the "realm of essence," the source of things", the "Id", the "Creative Unconscious" are common.

The biggest obstacle to objective truth is one's own self image or "mask". We are inclined to believe whatever is consistent with whatever belief system makes us feel good about ourselves. In America, an entire political party espouses what was once called “supply side” economics but now more often referred to as “trickle down” theory.

The theory is discounted by almost every reputable economist upon abundant objective and verifiable data. That this theory continues to be popular suggests that it's appeal does not lie in objective truth. “Trickle down” economics is most surely a convenient rationalization of an increasingly self-absorbed life style catered to by the mass media. Has modern America become a culture premised upon mass denial?

In 1936, Jung was trying to figure out what was happening in Germany —just as many are trying to understand what is happening in America today. Jung wrote an essay called "Wotan" and in it, he tried to understand developments under Hitler, in terms of the mythology of the god Odin, a.k.a. the Germanic god Wotan. Jung wrote: "We have seen him come to life in the German Youth Movement." I am not sure what "gods" have come to life in America —but I am more inclined to characterize them as fallen demigods, if not demons. Gods or Demons, they are but manifestations of the human personality. There may be a "Wotan" in all of us.

A “mask” is but the smiley face we show the world; it's origin is the lie that we tell ourselves. I recently watched a PBS documentary about a Japanese sergeant who "supervised" British and Australian POW's in Southeast Asia during WWII. Though he had been convicted of war crimes in connection with the treatment of the POW's, the man —some 55 years after the fact —still denied that thousands of POWs had been literally worked and starved to death under his supervision. He denied that he had beaten many of them himself with wire whips.

There is an old saying that the truth will set you free. But here was a man who by his denial had made himself prisoner to the lie —his own lie. In Jungian terms, his life --premised as it was upon the falsehood that he told himself --was "inauthentic".

Dr. Gustav Gilbert, the American psychologist at Nuremberg, came to some conclusions based on his experiences keeping Nazi war criminals alive until final sentencing could be carried out. He said that he had come to understand the nature of "evil". Evil, he said, was an utter lack of empathy. I might add: that empathy with another is only possible if one has come to terms with one's own "shadow", one's own "source of creativity", one's own humanity. One who cannot see humanity in him/herself or in another is a Nazi in spirit; and “Nazism” typifies what Jung would have called the "inauthentic" life, a life lived upon lies and denial. A life lived behind a false mask.
Posted by Unknown at 4:17 AM 9 comments: