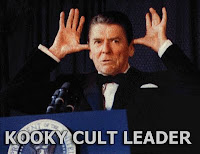 by Len Hart, The Existentialist Cowboy
The U.S. right wing will not be happy until every American is reduced to a mere 'consuming' machine, a unit, into which is fed the most absurd lies, the most outrageous right-wing rewrites of history, the most transparent pre-texts for war, aggression, oil theft, ongoing deprivations of civil liberties. As wealth is transferred upward to what is now a ruling elite of just one percent of the entire population, we are expected to concede our last redoubt: 'our' media!

Krasnow: "The spectrum is there whether it is used or not; only when it is enhanced by the use of broadcasters and others does it have any value at all to the public." --Former FCC Counsel Erwin Krasnow Calls For End To 'Public Ownership Of Airwaves' Standard

The latest outrage is the more recent reprise of the right wing's ongoing attack on what had been the people's airwaves, the people's media, the people's right to know and its implicit corollary: the people's right to be told the truth!
Krasnow's conclusion is absurd! What value has the public derived from being lied to and/or brainwashed? If his only concern is how 'broadcasters' may return a profit then consider the more reasonable alternative to the 'theft' of publicly owned airwaves. Let the corporations rent the airwaves from the 'people' whose ownership of the public airwaves was recognized by the Communications Act of 1934! Even better --allow a publicly owned corporation to manage and utilize the 'airwaves" for the benefit of millions that are reduced to mere demographic targets today!

Where is the precedent, the principle that says the public at large is responsible for ensuring that big corporations make big money? Where --in the history of Europe and the U.S. --is there an established principle that the people are responsible for ensuring that a corporation be successful? Where is the principle that awards assets to a private enterprises because 'profits' are not returned to someone should the people own them? There is no such principle! But given enough time Antonin Scalia is sure to pull something just as absurd out of his ass!

To expect the public to finance the very lies that are served up to them is absurd if not criminal! KRASNOW'S reasoning is fallacious, a right-wing inspired rationalization, an ex post facto excuse to let huge corporations reap huge profits by lying to us, brainwashing us, and otherwise kissing up to the right wing of which they are a part! Such a corporation could not possibly do a worse job than have the likes of FOX et al. As evidence --I give you Rush Limbaugh, Billo, Hannity, the entire FOX network and every screaming Limbaugh wannabe in the nation! It is time these charlatans and posers be denied the 'privilege' of yelling 'FIRE, FIRE' in a crowded theater(s)!
The full-court press against the people's rights began when Ronald Reagan appointed communications attorney Mark Fowler to head up the Federal Communications Commission. Fowler had served on Ronald Reagan's presidential campaign staff in 1976 and 1980. He became Reagan's hatchet-man. The FCC began to repeal parts of the Fairness Doctrine, announcing in 1985 that the doctrine had hurt the public interest and violated free speech rights guaranteed by the First Amendment." That's nonsense.
Trashing the Fairness Doctrine, in fact, denied 'free speech' to everyone but the ruling elites who can afford the millions of dollars it takes to own and operate a radio station, perhaps the billions required to operate a world-wide network of right wing nuts, fascists, and goofy goons like Billo Really? and Glenn Beck! ? Ask youself: does 'free speech' exist at all when ONLY the likes of Billo and Beck have the 'right' to lie to millions every second that they are on the air? Of course not! You have been reduced to passive vassal. As long as the right wing continues to steal and abuse what had been YOUR airwaves, free speech exists only for the mere 1 percent who can afford to buy a network or even a single radio station!
See also: How the Right Wing Stole the People's Media for the Big Corporations

I don't think they think of us other than being consumers..and as long as its stuff they make..? they could care less.

Growing corporate power stands alone as our greatest threat. To personal liberty, to ecosystems and to peace.
Good stuff...always good to find another thinking "cowboy."

My thanks to YELLOWDOG GRANNY and Beau Payton for your comments. Very much appreciated. Please spread the word. 'Corporate personhood' is among the most absurd notions to come from out of our crooked politicians. We could expose it more effectively IF we had a PEOPLE'S MEDIA ---and not a media that shills for the corporate/fascists 'master race'.

good post I enjoyed reading it. I have this blog linked and read alot, sorry I never comment to compliment the posts! Not in a long while anyway. Always great stuff!

I have this blog linked and read alot...

Welcome back, Genie and thanks for the encouraging words.