Carl Bernstein Calls for a Senate Investigation of the Bush Conspiracy 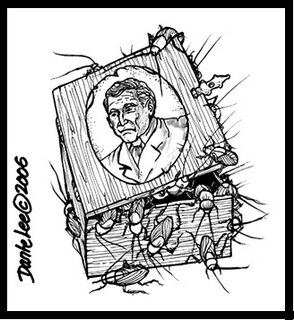 A real investigation will surely be the end of what's become a criminal conspiracy that is literally being run out of the White House. Some have suggested prosecution under RICO statutes. Bernstein's call for a Senate investigation comes at a time when a grass roots movement to impeach Bush "state by state" is gaining momentum even as Bush's ratings plunge seems driven by angry conservatives.

The Bush administration is not a "Presidency"; it's a criminal conspiracy. The GOP is not a political party; it's a crime syndicate.

Carl Bernstein is sure to shake up the "inside the loop" crowd with this one:

In this VF.com exclusive, a Watergate veteran and Vanity Fair contributing editor calls for bipartisan hearings investigating the Bush presidency. Should Republicans on the Hill take the high road and save themselves come November?

Worse than Watergate? High crimes and misdemeanors justifying the impeachment of George W. Bush, as increasing numbers of Democrats in Washington hope, and, sotto voce, increasing numbers of Republicans—including some of the president's top lieutenants—now fear? Leaders of both parties are acutely aware of the vehemence of anti-Bush sentiment in the country, expressed especially in the increasing number of Americans—nearing 50 percent in some polls—who say they would favor impeachment if the president were proved to have deliberately lied to justify going to war in Iraq.

John Dean, the Watergate conspirator who ultimately shattered the Watergate conspiracy, rendered his precipitous (or perhaps prescient) impeachment verdict on Bush two years ago in the affirmative, without so much as a question mark in choosing the title of his book Worse than Watergate. On March 31, some three decades after he testified at the seminal hearings of the Senate Watergate Committee, Dean reiterated his dark view of Bush's presidency in a congressional hearing that shed more noise than light, and more partisan rancor than genuine inquiry. The ostensible subject: whether Bush should be censured for unconstitutional conduct in ordering electronic surveillance of Americans without a warrant. ...

Dare we hope that Bush's criminal conspiracy is falling apart? An indictment of Rove is a safe bet. An indictment of Dick Cheney may follow. Bush, himself, has no where to run, no place to hide.

Bush's overall approval rating is at about 32 percent depending on which poll you choose to quote.

... according to an AP-Ipsos poll that underscores why Republicans fear an Election Day massacre.
ADVERTISEMENT

Six months out, the intensity of opposition to Bush and Congress has risen sharply, along with the percentage of Americans who believe the nation is on the wrong track.

The AP-Ipsos poll also suggests that Democratic voters are far more motivated than Republicans. Elections in the middle of a president's term traditionally favor the party whose core supporters are the most energized.

While various state legislatures could petition congress to convene a new National Convention, the so-called "Thomas Jefferson Manual" seems to be the course of choice. When enough state legislatures demand it, a bill of impeachment may be brought against George W. Bush. The Senate investigation that Bernstein supports may turn out to be the crack that breaks the damn.

Additional resources:Bush, Oil Prices,War in Iraq
'Toons by Dante Lee; use only with permission
HOME
Posted by Unknown at 7:37 PM

Bernstein would know, of all people. While VF is a fine venue, this article should have run in the Times, for a broader audience.

I predict 29% next poll. Rove is going to be indicted next friday. See BooMan Tribune for more details.

Don't forget the Tony Snow Show...will be debuting soon. This guy was hired to smooth it out, and as wimpy as the press core is, it will not be to tall an order for Snow. Of course reality based folks know it's a hucksters paradise over at 1600 Pennsylvania Ave. Although Snow can't really pull Bush/co out of the fire, he sure will be able to turn down the heat. Or convince folks, nay...theres no fire.

If anyone caught Colbert's "act" at the annual press club party (I guess those press people are gluttons for punishment) he clearly stated his view on the press core and their special relationship with the WH. The decider (Bush) instructs the press secretary, who informs the press core, who copies down the notes as an efficient clerk, bringing the "news" back for distribution to everday Americans.

Colbert goes on to say that it's a great system, as it frees up the reporter's time by not having to ask all those pesky questions. This in turn saves them time, and allows them to get back to their book writing...you know, that fiction piece about the brave investigative reporter. They all laughed hard on that one...so we know they "get it"...but hopw will they perform? At any rate , I believe Colberts just preping us for the Tony Snow Show...I think he knows how it will go down for a while.

Here are severla others I found today too:

But a Fitzmas - Rove indictment will add yet another nail in that coffin of this criminal conspiracy.

Great links! Hightower is not only a great writer, he has a great radio commentary as well. Unlike Bushie —a phony in every sense of the word —Hightower has a REAL Texas accent. And he does NOT say "noo-kuh-luhr".

Thanks for the link about how the Bush police state has effectively repealed the Bill of Rights. So —when Bushies try to tell you that they are murdering Iraqis for the cause of "freedom", it's just another black hearted lie.