Recession/Depressions: How the GOP 'Soaks' the Poor and Middle Classes 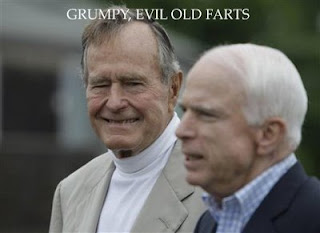 'Depression' is the word used to describe how the working classes get soaked. Austrian-born economist Joseph Schumpeter as quoted in Robert Heilbronner's "The Worldly Philosophers" regaled his Harvard students in the mid-1930s

Chentleman, you are vorried about the depression. You should not be. For capitalism, a depression is a good cold douche. [By which he meant shower.]

Scrooge put it even more bluntly:

"Are there no workhouses? Are there no prisons...then let them die and decrease the surplus population."—Scrooge

There have been fears that the US economy was perched to jump off into a 1930s-style depression. Thanks to Schumpeter, many have said that a recession or a depression may not be such a bad thing. That depends, of course, upon whether or not you have enough reserves to ride out a recession. It has been argued that the international 'banking establishment' manufactures recessions/depressions to give investors a chance to pick up bargain stocks or entire businesses. But --is this a good thing as Schumpeter implied?I hate to say 'I told you so' but I told you so! Here is an excerpt from my previous article. The American right wing, consulted by slick Madison avenue whiz kids, will never call the American gulag of FEMA camps by the names 'work houses' or 'prisons'. By any name, they are presumably open and ready for those who fall through the gaping cracks. A perpetually depressed economy is a good source of slave labor. Who benefits? KBR? Halliburton?
Recessions/depressions are paid for with the 'blood, toil, tears and sweat' of the working classes without whom nothing would ever get produced and no profit would be realized. This would be a high price to pay even if the benefits were fairly distributed at the end of what is euphemistically called the 'business cycle'. But they never are. It is always the upper classes, recently, the top one percent of the nation, that benefit. It is the 'lower classes' who pay for the recession by suffering the Four Horsemen of Economic Apocalypse: unemployment, lower wages, higher prices and bankruptcy.The GOP exploits convenient rationalizations that benefit Bush's 'my base'. Some in the GOP will choose to believe, as did Joseph Schumpeter, that depressions are but 'a process of creative destruction' that weeds out 'inefficiencies' in the economy. Others know that not to be true butrepeat it anyway just as they had espoused 'supply-side' economics during the Reagan years. It is not 'inefficient firms' that are weeded out. It is the competition, it is what is left of the America's working class, it is the millions who will be deprived of education, opportunity, future.

Are there no FEMA camps? Are there no prisons? Then let them die and decrease the surplus population.—Scrooge (updated)

There's another element of this you may not have considered. That's the illegal NSA wiretapping scandal. With NO OVERSIGHT WHATSOEVER, what's to stop the NSA from listening in on people's calls to their brokers and other business associates?

" Unscrupulous members of government (*cough*Dick Cheney*cough*) could wiretap the communications of businesses, find out about significant deals and events before they were public, and use the information for insider trading. Without the giveaway of being an insider. NSA 'professionals', (whom the government keeps portraying as totally trustworthy), could make a tidy second income selling proprietary information to business competitors. "

If Bush, Rove or Cheney decide they want to take down George Soros or Warren Buffet all they would need is lots of market volatility - say conditions where the DJIA was swinging several hundred points up or down nearly every day, and individual stocks changing 30, 40 or 50 percentage points.

There's another element of this you may not have considered. That's the illegal NSA wiretapping scandal. With NO OVERSIGHT WHATSOEVER, what's to stop the NSA from listening in on people's calls to their brokers and other business associates?

Excellent point! Would the government manipulate the market? Well, governments always have whenever they've had the power to do so.

Quite related to the subject, Lenn: is this a hoax about that "amero" currency and the "force majoure" plan? This guy Hal Turner is just playing with his readers?:
Video here