Let Them Eat the "Higher Pie" 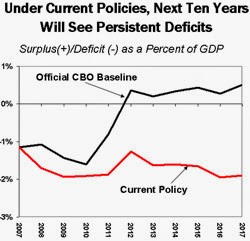 The U.S. right wing consistently mistakes bigger slices of a smaller pie for growth! In fact, wealth is the product of labor. Therefore, real growth creates larger pies, larger slices. Real growth is, by definition, egalitarian or not at all! America's ruling elite amounts to just one percent of the total population and they own more than the rest of us combined.

Economists call a 'shrinking pie' a 'contraction' but, since Ronald Reagan, the rich have enjoyed the growth of their 'slices' as the pie itself shank. With every GOP tax cut since 1900, the economy has contracted but the 'slices' owned by the elite increased. The rich decrease as a class but grow wealthier with bigger slices. If you can visualize this, you will have mastered right-wing, trickle UP economics.

The effect for everyone but the very, very rich is called 'depression' i.e, 'contraction'. This process can be modeled mathematically. Anyone not a member of the top one percent voting GOP votes against his/her own interests. Anyone voting GOP expecting to join them one day is insane. There is no 'higher pie' --only a shrinking one.

When I am charitable, I suspect that their perspective is myopic in the extreme. More realistically, I suspect that they just don't care! Or worse --the transfer of wealth upward to just one percent of the total population was deliberate and achieved with a carefully crafted program of GOP tax cuts beginning with Ronald Reagan's tax cut of 1982. Only the very richest people in America benefited. Everyone else got poorer in terms of dollars earned but also as a result of declining purchasing power as prices are bid upward by the wealthy.

Since 1900 the U.S. has 'experimented' with 'robber baron economics', 'supply-side economics', 'trickle down theory' and assorted 'stimuli' that also put the fat cats and so-called 'investor' class at the top of the pecking order with often tragic results --the Panic of the late 1800s, Hoover's Great Depression, Ike's 'Recession', Reagan's 'Tent City' Depression of over 2 years! Anyone not seeing the pattern is just not paying attention.

My thoughts along these lines are inspired by the following article by my good friend, Communications expert, Doug Drenkow.

Presently, there is a great debate in the United States and beyond: In this, the greatest recession since the Great Depression, should the government spend more money on putting more people to work -- or saving more jobs, as by the federal government helping our increasingly desperate state governments -- or helping unemployed workers pay their bills till the job market turns around? Or should the government of this and many other nations focus more on paying down our historic debts, by cutting spending and/or increasing taxes, to stabilize our economies and thus, presumably, turn them around?

Do we so soon forget where most of that debt came from, where most of our money went? In the United States, much has been spent bailing out institutions "too large to fail" as well as propping up the rest of our economy, although apparently not enough -- thanks in large part to fiscal "conservatives," in both parties, who slashed last year's stimulus bill in half.

But even more than that, our treasury has amassed massive debts due to tax cuts that went mostly to the wealthy, under the administration of the previous president, and that were unfunded, as were the wars that were then started, with or without just cause, and that rage on, although now with ends apparently in sight.In short, as many "deficit hawks" propose, should the Social Security, education, public safety, and other programs benefiting the working people and middle class of America be dramatically cut? Should the wealth of the country -- the product of the work of the workers of the country -- be in (unstated) effect permanently shifted from the bottom to the top, exacerbating the already historic inequality of wealth?Although such authorities as Nobel Prize-winning economist Paul Krugman do a better job of explaining the whys and wherefores, the bottom line is this: If the working families in America and beyond do not prosper, how can the nations we build and maintain and defend and support do anything but wither?Never forget, America is ultimately no greater than the sum total of the hopes, dreams, aspirations, and everyday lives of all our "everyday" people.From the Declaration of Independence ...

"We hold these truths to be self-evident, that all men are created equal, that they are endowed by their Creator with certain unalienable Rights, that among these are Life, Liberty and the pursuit of Happiness. That to secure these rights, Governments are instituted among Men, deriving their just powers from the consent of the governed."

"We the People of the United States, in Order to form a more perfect Union, establish Justice, insure domestic Tranquility, provide for the common defence, promote the general Welfare, and secure the Blessings of Liberty to ourselves and our Posterity, do ordain and establish this Constitution for the United States of America."

... to the Four Freedoms, espoused by President Franklin D. Roosevelt ...

"In the future days, which we seek to make secure, we look forward to a world founded upon four essential human freedoms.
"The first is freedom of speech and expression -- everywhere in the world.

"The second is freedom of every person to worship God in his own way -- everywhere in the world.

... and the challenge issued by President Barack Obama ...

So as we celebrate America today, let us protect, nurture, and cherish all the extraordinary "ordinary" people who are Americans. And let that be the guiding principle in our negotiations over budget, unemployment, and all the other public business of America. If U.S. working families work and prosper, then so will America. If not, then God have mercy on us all.Douglas Drenkow

Clearly, the U.S. remains powerless to address these issues as long as the government is literally owned by the dwindling few who benefit. It is simplistic and naive to expect a government beholden to the super-rich to work -in good faith --for those who are denied both a voice and a meaningful role in this 'government of the people." It is simplistic and naive to expect a robber baron class to simply bow to the will of what it must surely believe is but a great mob of unwashed masses to whom is left an absurd choice by elites and/or idiots: 'higher pies' or 'let them eat cake! It is folly to assist the theft of U.S. wealth by this robber baron class. It is America's death knell that so few care and that so many multitudes will suffer!
Posted by Unknown at 1:26 AM 8 comments: