by Len Hart, The Existentialist Cowboy
American Airlines itself is the source for information that AA Flights 11 (North Tower) and 77 (Pentagon) did not fly on 911. These flights are critical to the the government's crumbling cover up! Without those flights, Bush and his murderous co-conspirators will have to revise the big lie. They will have to concoct yet another cover story from the ground up!

A cover up is on the brink of collapse when those guilty of capital crimes and high treason either turn on one another or are forced to revise the lie!If neither flight was in the air as American Airlines itself has so stated, then numerous 'official versions' of the 'official conspiracy theory' are all a pack of malicious lies. That includes almost every statement made by Bush. It is, in my opinion, probable cause to indict Bush and his co-conspirators for the crimes of mass murder and high treason.
WikiScanner discovered that American Airlines changed their Wikipedia entry to state that Flights 11 and 77 never flew on 9/11. Original entry was:

New entry is as follows and it includes the bolded text below:


According to a Freedom of Information Act reply from the U.S. Bureau of Transportation Statistics (BTS), the last known pre-9/11 flights for three of the four aircraft involved in the terrorist attacks of September 11, 2001 took place in December, 2000, nine months before the attacks, while no pre-9/11 final flight information was provided for American Airlines flight 77 (N644AA).

However, a discovered searchable online BTS database produces the following search results for three of the four 9/11 aircraft on September 10, 2001:

Anyone trying to prove that Flights 77 and 11 were not flying on 911 would have to verify that proposition through authoritative sources that could confirm it. The question is raised: how do we know who made the changes to Wiki? Everyone logged on to the internet does so from an IP address. In this case, the IP is that of American Airlines. It's traceable.
My own WHOIS lookup as well as a Google search of the IP address proves conclusively that it was --indeed --American Airlines itself that made the change. It is American Airlines --by way of Wiki --that has said that neither Flight 11 nor Flight 77 were in the air that day.
Therefore, the Bush theory of 911 is a deliberate lie.

This is not the first major hole to be discovered. The many lies (many referenced in previous EC articles; see links below) are probable cause to begin a Federal Grand Jury investigation of George W. Bush's role in 911. Bush should be compelled by subpoena and Federal Marshals to testify under oath before an independent Federal Grand Jury. The AA revelations demand it!

Bush lies have the effect of covering up the truth, protecting the guilty and obstructing justice. The lies are an insult to the families of 911 victims, victims who are dishonored by the continuing cover-up! Bush's lies aggravate the crimes of mass murder, terrorism and high treason for which the penalty must surely be death. 911 did not happen as we have been told.

We were lied to

That AA claims that neither 11 or 77 were in the air that day sinks Bush's theory.

More importantly, however, it should get him an 'invitation' to appear before a Federal Grand Jury to answers charges that he betrayed his nation and waged war upon the people. Clearly --the official theory is a lie, an intentional cover-up. Cover-ups imply guilt! Otherwise --what is there to cover up? The official 'lie' goes like this:


At 8:20, Flight 11 stopped transmitting its transponder signal, and veered northward and departed dramatically from the westward heading of its planned route. The controllers concluded that the plane had probably been hijacked. 4 5 At 8:24, the following transmission was reportedly received from Flight 11: We have some planes. Just stay quiet and you'll be okay .. we are returning to the airport...Nobody move. Everything will be okay. If you try to make any moves, you'll endanger yourself and the airplane. Just stay quiet. Nobody move please we are going back to the airport .. don't try to make any stupid moves. 6 Neither of the pilots pressed the distress call button. At 8:28 controllers reportedly watched the plane make a 100-degree turn toward the south. 7 Presumably, Flight 11 continued south along the Hudson River until it reached the World Trade Center, though documentation of this is sparse given the lack of public information.According to NORAD's September 18 timeline, the FAA did not notify NORAD of the signs that Flight 11 was hijacked until 8:40, 25 minutes after the first signs of trouble. 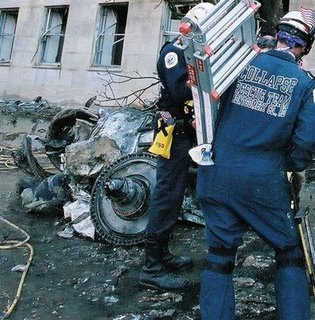 Elsewhre, 911 Research stats: "...there is no evidence for the assertions by some people... that the North Tower was hit by something other than Flight 11." I can do better: those who assert must prove. Ergo: those who believe the Bush version of events must prove the Bush version or, at the very least introduce some evidence in support of the official conspiracy theory.

Rather, the Bush admin and its supporters have not proved or supported! They have, in fact, threatened and intimidated. It is, rather, the assertions that Flight 11 struck the North Tower that are utterly baseless.

The burden of proof is on those who assert. Those who assert that Flight 11 did not fly that day must prove their assertion. If the case had even been taken to court, a judge would have required evidence meeting legal requirements of the bench, the court, and eventually a jury.
If neither Flight 11 or 77 was in the air that day, then nothing in the 'official statements' with regard to the Twin Towers is true. The house of cards collapses.
While it is not good news for Bush, it is consistent with the fact that no wreckage traceable to a 757 was ever found at the Pentagon. The rotor seen photographed beside one of the workers in the wake of the "attack" is what some have called a turbine jet. Had a Flt 77 crashed into the Pentagon, two of these would have been found. Alas --only one was photographed (above).

There are several problems with that: 1) there are two of these in a 757; only one was recovered. Had a complete investigation been made, more inconsistencies may have made the Bush version of events so outrageous that a full and competent investigation could not have been dodged or covered-up. 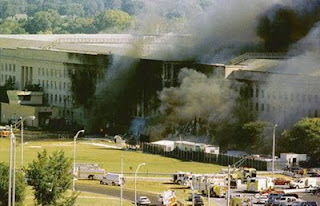 Where is the Airliner?

Moreover, photos of an engine rotor appear to depict an engine used in the Global Hawk, a payload carrying missile that was, according to Britain's International Television News, flown from the US to Australia completely by remote control. "A robot plane has made aviation history by becoming the first unmanned aircraft to fly across the Pacific Ocean."

Britain's ITN continued: "The Global Hawk, a jet-powered aircraft with a wingspan equivalent to a Boeing 737, flew from Edwards Air Force Base in California and landed late on Monday at the Royal Australian Air Force base at Edinburgh, in South Australia state... It flies along a pre-programmed flight path, but a pilot monitors the aircraft during its flight via a sensor suite which provides infra-red and visual images."

ITN quoted Australian Global Hawk manager Rod Smith: '"The aircraft essentially flies itself, right from takeoff, right through to landing, and even taxiing off the runway."'
The Global Hawk is a much better candidate for what Rumsfeld called "...the missile that struck this building" than a 757. Here's what you need to know about the Pentagon.
The time has come to consign Bush's official conspiracy theory to the dust bin of history. The theory is not even a good cover story, surviving for as long as it did only because millions of good Americans wanted to believe it. Millions of otherwise good Americans did not wish to believe the very, very worst about an administration that had claimed to represent and defend our interests. Millions of Americans chose to believe that the government was still responsible to us, that the government was still the defender of Democracy as we are always taught in school.

Below: a US Global Hawk painted to look like an AA airliner. 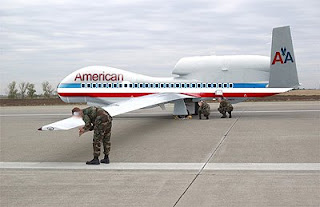 America, it is time to grow up! Recognizing lies for what they are is a part of the process of growing up! It is time to confront this heinous pack of lies and to insist that the Obama administration begin a REAL investigation.

It is time to insist that a Federal Grand Jury investigate every count of high treason, mass murder and domestic terrorism that was perpetrated upon the people of the US by the Bush administration, collaborators in the Pentagon, K-Street, the Congress and the leadership of the Republican party, Marvin Bush's 'Securacom', Larry Silverstein, General Myers, Donald Rumsfeld, Dick Cheney and, of course, George W. Bush who was, at the time, the 'Commander-in-Chief' and ultimately responsible for the orders given the US military to 'stand down'.


By Donald Rumsfeld's own admission, he was unaware of any threats to the Pentagon -- the building where he was located during the September 11th attacks -- until an aircraft crashed into the side of it, and he ran out "into the smoke" to see if it might be a "A bomb? I had no idea." (ABC News This Week, Interview 9/16/01).Well, that's a pretty tall tale by any standard.

The New York Times reported that by 8:13am, the FAA was aware of the first hijacking out of Boston. The Pentagon explosion, which Donald Rumsfeld claimed he had "no idea," did not occur until approximately 9:37am, nearly an hour and a half later, this after two of the tallest buildings in the world were devastated. Note that a plane hijacked out of Boston can reach Washington D.C. as easily as it can reach New York City. It was widely reported that Pentagon personnel were indeed aware of the threats to their security, and they took security measures on that morning. But not the "Secretary of Defense."

Why should the man charged with defending the United States of America concern himself with hijacked aircraft?There is a set of procedures for responding to hijackings. In particular, these procedures were changed on June 1, 2001 while Rumsfeld was in power as our Secretary of Defense, in a document called:

The video asks: "Was 911 a Conspiracy?" That is NOT the question. Even Bushco claims that it was a conspiracy, a conspiracy of 19 Arab Hijackers who could not possibly have pulled it off. It is, frankly, a stupid scenario! Without the shock and awe campaign, no one would have believed it. The questions, rather, are which conspiracy and who were the conspirators? It was Sir Arthur Conan Doyle's character Sherlock Holmes who said that when you have eliminated the impossible what remains however improbable MUST be the truth! Following is a reader's playlist. I recommend it.