Right Wing Attacks on the Separation of Church and State

by Len Hart, the Existentialist CowboyWhen he was still indulging visions of the White House, the right wing's snot-nosed ideologue --Rick Santorum --was stirring up fears and spreading distortions about the First Amendment. Wing nuts have done this before. Fear mongering, they believe, rallies an increasingly radical religious fringe. The word for it is demagoguery. Rick Santorum, for example, has said that the separation of church and state is NOT absolute. I beg to differ and so would have Thomas Jefferson who described a WALL OF SEPERATION between Chruch and State. And I will venture that Jefferson was in a better position to know what he was talking about and that Jeffeson was infinitely more intelligent than Rick Santorum. 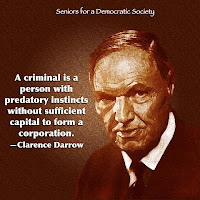 The following is the text of the letter that Thomas Jefferson wrote to the Danbury Baptist Association in the State of Connecticut, assembled October 7, 1801.

To messers. Nehemiah Dodge, Ephraim Robbins, & Stephen S. Nelson, a committee of the Danbury Baptist association in the state of Connecticut. Gentlemen The affectionate sentiments of esteem and approbation which you are so good as to express towards me, on behalf of the Danbury Baptist association, give me the highest satisfaction. My duties dictate a faithful and zealous pursuit of the interests of my constituents, & in proportion as they are persuaded of my fidelity to those duties, the discharge of them becomes more and more pleasing. Believing with you that religion is a matter which lies solely between Man & his God, that he owes account to none other for his faith or his worship, that the legitimate powers of government reach actions only, & not opinions, I contemplate with sovereign reverence that act of the whole American people which declared that their legislature should "make no law respecting an establishment of religion, or prohibiting the free exercise thereof," thus building a wall of separation between Church & State. Adhering to this expression of the supreme will of the nation in behalf of the rights of conscience, I shall see with sincere satisfaction the progress of those sentiments which tend to restore to man all his natural rights, convinced he has no natural right in opposition to his social duties. I reciprocate your kind prayers for the protection & blessing of the common father and creator of man, and tender you for yourselves & your religious association, assurances of my high respect & esteem.Th JeffersonJan. 1. 1802.

ADDENDUM: Rick Santorum is of an authoritarian mentality that asserts a 'right' to believe claptrap i.e, 'intelligent design' and at the same time DENY you the right to believe the truth about modern theories of evolution even as they themselves lie about them or raise strawman fallacies. At the same time, they label both facts and theories --'Darwinian' --as if 'Darwinian' were a bad word. It's NOT!Tragically --the right wing has a mental 'blind spot'. The 'right' is INCAPABLE of applying to themselves objective rules of logic and evidence. While most intelligent people today are comfortable with the fact that the 'laws of physics' apply everywhere in the universe and are discovered, described ONLY by observation and empirical methods, the 'right wing' inclined live in a pluralistic universe and never consider for a moment that their thought processes are, in fact, reversed.Intelligent 'folk' will follow a premise logically to a conclusion. The right wing --rather --ASSUMES the truth of an ideology, a prejudice, a mentally impaired rationalization --and accept ONLY those conclusions which conform to the prejudice. The 'open mind' is anathema to them if not completely unheard of in their circles. By any definition, the American right wing is a 'kooky cult'!
Posted by Unknown at 7:27 AM 2 comments:

by Len Hart, The Existentialist CowboyJulian Assange has been in 'custody' illegally! His right of 'habeas corpus' has been denied him though not formally. He is simply detained, denied his freedom of movement and, presumably, his access to the international press! In fact, no charges have ever filed against him. No 'probable cause' has been demanded of his captors by any judge. He is a political prisoner in every sense of the word. He may be the picture of a fascist future when 'authority' or 'force of arms' simply decrees one to be an enemy of the state.Assange is locked up though the burden of proof in almost every western nation has rested upon those making accusations. In this case there is no 'probable cause' whatsoever that Assange committed any crime. No formal charges have been filed against him! Officially, he has not even been accused of a specific crime. He is a political prisoner. He is a 'captive' of a crooked state(s). TYRANNY

The arrest warrant for Julian Assange should not stand and breaches "a matter of fundamental legal principle", the supreme court has heard . Dinah Rose QC, defending the WikiLeaks founder in his final appeal against extradition to Sweden to face allegations of sex crimes, told the panel of seven senior judges that to consider the Swedish public prosecutor as a judicial authority was "contrary to a basic, fundamental principle of law". Reaching back as far into European legal history as the Codex Iustinianus, dated 376 AD, Rose said the Swedish prosecutor was a party in the Assange case and therefore not independent and impartial, breaching the principle that "no one should be judge in their own cause", which Rose said was one of the pillars of natural justice. --Julian Assange extradition breaches legal principle, lawyer claims

This is an outrage! Everyone should be outraged! If Julian Assange can be imprisoned though NO CHARGES have ever been lodged against him, NO ONE IS FREE!When the U.S. Bill of Rights had not yet been trashed, subverted by the likes of George W. Bush, the crooked court made crooked by the likes of Thomas, Scalia et al, the Bill of Rights had GUARANTEED every American DUE PROCESS OF LAW. The principle, it was hoped, would have been universal among 'western nations'. In fact, no one should be denied the right of Habeas Corpus.

Latin for "that you have the body." A writ of habeas corpus is used to bring a prisoner or other detainee (e.g. institutionalized mental patient) before the court to determine if the person's imprisonment or detention is lawful. In the US system, federal courts can use the writ of habeas corpus to determine if a state's detention of a prisoner is valid. A habeas petition proceeds as a civil action against the State agent (usually a warden) who holds the defendant in custody. It can also be used to examine any extradition processes used, amount of bail, and the jurisdiction of the court.--See, e.g. Knowles v. Mirzayance 556 U.S.___(2009), Felker v. Turpin 518 US 1051 (1996) and McCleskey v. Zant 499 US 467 (1991).

Simply, if charges cannot be found and filed upon PROBABLE CAUSE, the person targeted should be, must be released! Habeas corpus originated in the English legal system, embraced by the American founding fathers, and made law in the Bill of Rights! It is, likewise, guaranteed in many nations. Make the Right of Habeas Corpus a Principle of International Law. It is an essential safeguard against tyranny, arbitrary state action, 'official vendettas! ORGANIZE to demand that Julian Assange be 'arraigned' and the charges against him HEARD together with the probable cause that he violated ANY LAWS WHATSOEVER. If the 'authorities' don't even have enough 'probable cause' to file a formal complaint with a judge, then ASSANGE MUST BE RELEASED!
Posted by Unknown at 5:36 AM 9 comments:

by Len Hart, the Existentialist Cowboy I've lost track of my many 'reads' of E.L. Doctorow's great novel: Ragtime. I will probably read it that many times again. Every 'read' has been a new experience; and with every 'read', I learn something new.

There was also 'Tateh' and his young daughter. Tateh made 'silhouettes', selling them to help him to feed his little daughter and, if there was any left-over, himself. His fortunes improved when he learned how to make his creations appear to move. Eventually, the struggling Tateh became a director in the 'new' industry of motion pictures.

Like a creation by Tateh, all of these characters come to life and 'move' in Doctorow's book.

"Professional historians denominated it “the Progressive Era” and emphasized how Presidents Theodore Roosevelt and Woodrow Wilson had moved to control the power of big business while other middle-class reformers initiated reforms in the structure of government that diffused political power more broadly and democratically. For these historians the Progressive Era was the first step in a continuing reform process that, after an interregnum of conservative reaction in the Twenties, reached its apex in the New Deal and Fair Deal of Presidents Roosevelt and Truman in the Thirties and Forties. The story they told was one of a half-century in which the excesses of capitalism were brought under control, working men and women formed unions and secured a fairer share of the fruits of their labor, and political reform made the society more democratic and inclusive. Such change was possible because, they believed, there was broad agreement among most Americans about political means and ends and this consensus engendered evolutionary rather than revolutionary change."