Why GOP Administrations Do Not Create Jobs

What tycoons of old understood was that if wage earners earn more, they spend more. Jobs are created. Even more spending follows the additional jobs. That's the left/dem/progressive model. But the GOP method is just the opposite and so --too --the miserable results. 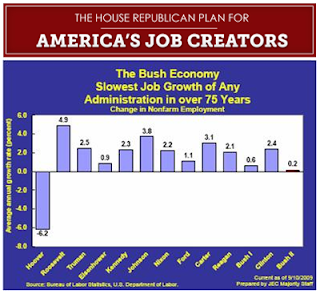 The effects of the GOP model are confirmed with official stats from the Bureau of Labor Statistics and the U.S. Commerce Dept and various other studies.

A GOP tax cut --from which only elites benefit --is invariably followed by a recession/depression, increased joblessness, higher prices and the export of jobs, most often, to China. [See: CIA'S World Fact Book, online] For example, Reagan's "infamous" tax cut was followed quickly by a depression of some two years (or longer). It was the LONGEST, DEEPEST depression since H. Hoover's GREAT DEPRESSION.

GOP tax cut for its elite base was quicklly followed by a recession of some two years. It was the deepest, longest depression since H. Hoover's big one! Not addressed with Laffers curve is the fact that elites have the purchasing power to bid prices UP! They also have offshore bank accounts. The results are not inflation! At least since Ronald Reagan occupied the White House, the GOP has tried to peddle tax cuts that have benefited only the elite classes with various forms of trickle down theory. No GOP plan has ever worked!

Posted by Unknown at 5:10 AM No comments: