Thomas More --now 'Saint Thomas More' --was surely the most prominent “secular humanist” in England during the reign of Henry VIII. What makes More a “humanist”, like his friend Erasmus, is his belief in the perfectibility of humankind. What makes More a “secularist” was his insistence, unto his own death, in the separation of “God’s law” and “man’s law”, a principle that we refer to as the separation of Church and State.  Lest we forget, More died at the hands of an all powerful "state". Though it was not Henry VIII who said l'etat, c'est moi he might as well have done. 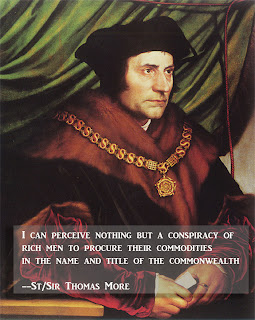 When the GOP embarked upon its unholy crusade to impeach Bill Clinton, it's many flacks tried to lend an imprimatur of legitimacy to their schemes by invoking the name of St/Sir Thomas More.

Typically, the GOP and prosecutor Kenneth Star specifically, mangled More and, in the process, proved themselves to be a party of mediocre intellects, opportunists, shallow sophists, perhaps, liars to a person! The following excerpt from Starr's interview with Diane Sawyer...


Kenneth Starr: Well, I love the letter and the spirit of the law, but it`s the letter of the law that protects us all. And, you know, St. Thomas Moore, Sir Thomas Moore put it so elegantly, you know, in A Man For All Seasons. He took the law very seriously and said, `That`s what protects us. It`s not the will of a human being. It`s not Henry VIII`s will. Henry VIII is under the law. We are all equal under the law.

In fact --no where in the play A Man For All Seasons did the character of Sir Thomas More say anything resembling that. More defended the obedience to "...man`s law, not God`s" [that makes More a secular humanist --a bad word among many throughout the right wing] and never made reference to either Henry VIII's law by name or description. The actual exchange that both David Schippers and Starr are both so fond of misquoting is as follows:


Roper: So now you`d give the Devil benefit of law!
More: Yes. What would you do? Cut a great road through the law to get at the Devil?
Roper: I`d cut down every law in England to do that.
More: Oh! (advances on Roper) And when the last law was down, and the Devil turned round on you --where would you hide, Roper, the laws all being flat? (He leaves him) This country’s planted thick with laws --man's laws, not God's [emphasis mine]--and if you cut them down --and you’re just the man to do it --d`you really think you could stand upright in the winds that would blow then? (Quietly) Yes, I`d give the Devil benefit of law, for my own safety`s sake.

In yet another memorable exchange:

The dialogue above was written by Robert Bolt for the play and movie: A Man for All Seasons. But should you want to read the original More you will find comments equally biting, equally witty, comments that will most certainly curl the hair of modern right wing reactionaries and intellectual gnomes! More, they will charge, is a socialist for his comments having to do with the business class:


...so God help me, I can perceive nothing but a certain conspiracy of rich men procuring their own commodities under the name and title of the commonwealth. They invent and devise all means and crafts, first how to keep safely, without fear of losing, that they have unjustly gathered together, and next how to hire and abuse the work and labour of the poor for as little money as may be.

Clearly, none of the Republicans attacking Bill Clinton had understood the movie. None of them had bothered to learn anything about their “hero” other than what they had seen in a movie. Indeed, this film is among the best movies ever made. Sadly, the real meaning of the film was lost on Kenneth Starr. He came away from it having learned all the wrong lessons and that may be worse than having learned nothing at all.

How the NRA Helped Create a Culture of Guns, Death and Violence

by Len Hart, The Existentialist CowboyA culture of guns and violence may be traced to the many myths and lies told about the Second Amendment by one lobby organization specifically: the NRA. The NRA has worked assiduously to create a culture of guns, lies and violence in the United States.

Sadly for our country, they have largely succeeded. Their efforts have borne fruit. Almost anyone can get a gun; lies about the Second Amendment are unquestioned by intimidated politicians who should know better; fatal shooting rampages will eventually cease to shock an inured public.The BBC was on the right track but, themselves, went wrong. Consider the following from their recent broadcast in the wake of the latest campus shooting:

The United States has the largest number of guns in private hands of any country in the world with 60 million people owning a combined arsenal of over 200 million firearms.The US constitution, which was written in 1787, enshrines the people's right to keep and bear arms in its Second Amendment.--BBC World Service

The BBC is most probably correct about the number of firearms inside the US. That the United States has nurtured and thus become a culture of both guns and violence is true on its face. The BBC is correct as far it goes. Indeed, fatal shootings in recent years, many involving teenagers, are troubling.But is it accurate to say that those shootings, as horrible as they are, have made the issue of gun control a key debate in US politics? No. There is no real debate about that in America. The NRA has been extraordinarily successful in perpetrating a gestalt of myths about the Second Amendment and, in doing so, it has re-framed the issue. It is no longer a debate about needless death, carnage and violence but about mythical rights under the Constitution, rights never intended by the framers, rights never intended by James Madison, the man who wrote the Second Amendment. The NRA has hoodwinked a gullible nation. Sadly, the NRA has no opposition. The Democrats are split down the middle on the gun violence issue. The GOP sold out long ago. This 'impasse' is due to many cultural factors that may be impossible to address. The best hope for rational debate is a concerted effort to disseminate the many truths about the Second Amendment in opposition to the NRA's many lies about it.The NRA, for example, lies about 'U.S. v Miller'! The NRA lies about U.S. v Miller because that decision is in opposition to NRA lies about the Second Amendment. The NRA leaves out an entire phrase --the part about a 'well-regulated militia'. In U.S. v Miller, the Supremes recognized the obvious: the 'right' to keep and bear arms occurs only within the context of a well-regulated militia. 'Miller' outlines the "collective" duties and responsibilities of militias, the historical context in which the word is defined. It considers, in turn, the role of states in regulating militias. The NRA is therefore wrong, and the decision of the Supreme Court in US v Miller is the law, whether the NRA likes it or not. Incidentally, one of the best "histories" of the role of the militias during the so-called "revolution" is to be found in the body of U.S. v Miller itself. Because this history is not written by the NRA it is a breath of fresh air.Another absurd theory often favored by NRA types would have you believe that what the founders meant by "militia" were un-regulated bands of well armed citizenry beyond the control and the regulation of states or national government. The proponents of this theory will tell you that the term "regulated" in the Second Amendment does not mean regulated "...by the government". Regulated, we are expected to believe, means self-regulated and equipped. In other words, armed to the teeth and unaccountable to anyone. That's absurd, of course.Believing the militias had been neglected, Madison, if he were alive today, would denounce the NRA position. It was the opinion of both Alexander Hamilton and James Madison that the states had neglected the regulation of their militias. Madison wrote the second amendment concurrent with his oft-stated criticism of the states. He sought to redress his grievance in that famous single sentence:

A well regulated Militia, being necessary to the security of a free State, the right of the people to keep and bear Arms, shall not be infringed.Second Amendment, Bill of Rights, U.S. Constitution