Why There is a Recession/Depression During Every GOP Regime 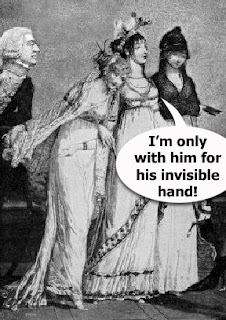 Every major economist has espoused the 'LABOR THEORY of VALUE'. That includes the conservative Adam Smith and the left-leaning Karl Marx. ERGO: a declining "real' wage that should go to labor TRICKLES (in fact, FLOWS) upward to the ruling elite.

The Axis of Reagan/GOP are wrong. Wealth does not and has never trickled down. "Suppy Side Economics" was and remains a scam, a con sketched out, it is said, on a napkin by Arthur Laffer. Laffer is remembered for his "Laffer curve" illustrating the theory that reducing taxes for the very wealthy would result in increased production. That has never happened. It's either a lie or a fairy tale or both.

The GOP embraced it immediately! They claimed that by cutting taxes for their base of wealthy folk, wealth would trickle down and create jobs. The opposite occurred. A recession of some two years followed Reagan's tax cuts. It was the deepest, longest depression since H. Hoover's big one!

Not addressed with Laffers' curve is the fact that elites have the purchasing power to bid prices UP! That's not inflation! It's theft! At least since Ronald Reagan occupied the White House, the GOP has tried to peddle tax cuts that have benefited only the eilte classes with various forms of trickle down theory. No GOP plan has ever worked! By now, the wealthy (if not everyone else) knows that "trickle down" or "supply side theory" is bunkum. The elite classes, however, will always resurrect it if it is believed that they can milk it for another tax cut or "stimulus" as they often like to call it.

The elites know what the general public does not: wealth does not 'trickle down'. Rather --it is labor which creates value and 'value' is the very source of a nation's wealth. Windfalls/tax cuts are not re-invested in ways that create jobs. They are squirreled away offshore or, in other ways, removed from circulation. The results are obvious: a recession/depression or --at best --a slow down follows every GOP tax cut. Every GOP administration since 1900 has presided over a recession/depression. Just a fluke? Not a chance!

Some of my long time FB friends may recall that my Great Uncle Lawson "Loss" Hart was the federal marshall who tracked down, outdrew, shot and killed the outlaw --Bill Dalton of the infamous 'Dalton Gang'. (depicted right)I just found some more interesting stories and information about my Great Grandfather --Timothy James Hart. 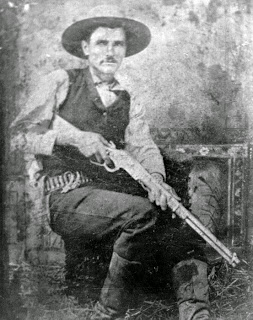 He fought on the side of the confederacy in the Civil War and later emigrated to Texas. It was in Cooke, County where he was put on trial for killing a man. He was acquitted "...by reason of self-defense." Timothy James Hart was buried in Antelope, Jack County, Texas.

Timothy James Hart is known to have spent some time in California (L.A. area). Given the fact that several "Hart" relations of mine continued westward to Los Angeles, I am now inclined to believe that I may be related to the movie star William S. Hart whose hand prints may be seen in concrete at Graumann's Chinese Theatre in Hollywood. So far, it would appear that the "Harts" were rancher/pioneers, law enforcers, veterans of the Civil War, and movie stars/producers. note: depicted is Lawson "Loss" Hart, Federal Marshal