The "Malibu Effect" and Why Greed is Not Good for You 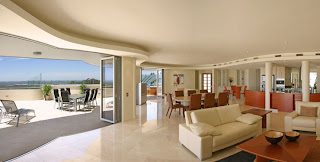 Inflation is crudely defined as too many dollars chasing too few products. A good example of inflation: in 1960 $30,000 would buy you a mansion. 30,000 today will buy you an outhouse. That's most probably inflation. Not inflation, however, is the effect that income disparities have on markets. When a smaller percentage of the population takes in a greater percentage of the nation's wealth, people who may seem to be earning the same amount of money are actually LOSING ground because of what I call the Malibu effect. As the rich get even richer, they bid up the prices of desirable items. Malibu, for example, is just another stretch of beach. But neither you nor I can afford to live there. This is not inflation; this is money controlling the market for the benefit of the very rich. As was said in the motion picture Wall Street: "Greed is Good"!

More accurately: greed is good but only for the privileged elite, the GOP base. This is seen to have happened during the Reagan Administration as Reagan took credit for bringing inflation under control. It was high unemployment over a period of some 16 months that brought inflation under control --not Reagan! But --that's beside the point. The point is that even as inflation was "brought under control", the GINI Index began a trend of exponential increases --the direct result of Reagan's tax cut of 1982.

Economists use the GINI index to measure inequality, disparities in income. Therefore, the loss of ground that middle and lower income families and workers experienced during the Reagan regime had nothing to do with inflation and everything to do with the fact that they had been "bid" out of a lifestyle that they might very well have afforded just five, ten, twenty years prior.

Someone posting on the now-defunct NPR "How's Bush Doing? Board" wrote:

I've been working for nigh onto 36 years; maybe I've finally made it.

How much credit did Clinton's prosperity get for that? The GOP was more interested in his sex life. When the nation finally began to emerge from the effects of Reagan's tax cut for the rich [namely, the 16 month long recession, the longest since the Great Depression, it was the result of "liberal" economics policies --not "conservative" ones.

That there was a recovery at all in Reagan's regime is a triumph of Keynesian economics --not the policies of that GOP "darling" --Milton Friedman. Keynes --not surprisingly --is reviled by "conservatives". Despite GOP lies to the contrary, Keynes defended the capitalist system. What the GOP really despises about Keynes is that he did not pretend to defend the "mythical" market economy model. Keynes proposed that prudent and well-planned government spending could prevent recessions. Just as Einstein's General Theory of Relativity was "proven" by putting it to the test, Keynes theories have been --by and large --proven in England, at least by those governments having the good sense to implement them.

In the U.S., unfortunately, the right wing associates Keynes with FDR --whom they still revile however  irrationally. In fact, FDR "stumbled" upon Keynesian economics by accident. In the first 100 days of his administration, he tried everything hoping SOMETHING would work. Those programs that worked turned out to have been KEYNESIAN! "Conservatives" still have not forgiven either FDR or Keynes. It has been said: a conservative is never so miserable as when times are good.

Sadly, however, FDR was not yet spending enough to stimulate an economy that had all but died. WWII changed all that. Expenditures jumped from some 15 billion to some 105 billion almost instantly. I have not taken the time to check those figures but I am sure that my recall is within the range and can be checked out. To the extent that the increased government spending made its way into wealth creation i.e. manufacturing etc, WWII ended the depression. But the effect tended to confirm Keynes.

What is worrisome is this: the United States became addicted to war. If we are not waging a Cold War, a War on Terrorism, a Korean War, a Viet Nam War, would we slip back into depression? Most certainly --if "conservatives" get their way. Conservatives will oppose government spending on what they consider to be "social programs", but, hypocritically, have no objection to even larger amounts of spending on the military or on corporate welfare.

Reagan ranks near the bottom of the list of American Presidents since WWII in terms of job creation. But Reagan is near the top if not the top in the manner in which he helped create the "ruling elite", in other words, the top one percent of the population.

...so God help me, I can perceive nothing but a certain conspiracy of rich men procuring their own commodities under the name and title of the commonwealth. They invent and devise all means and crafts, first how to keep safely, without fear of losing, that they have unjustly gathered together, and next how to hire and abuse the work and labour of the poor for as little money as may be.