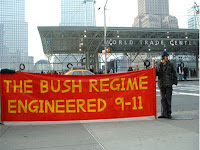 by Len Hart, The Existentialist Cowboy
History is being re-written as we write, speak or post. American Airlines itself was the source for my blog article of about 2 years ago in which it was revealed that Flight 11 did not fly nor had been scheduled to fly on 911.

The TIP off was a Wikipedia article which had been revised to reflect the truth about Flight 11. However, I wanted confirmation that it was, indeed, American Airlines, that was making the change. This I was able to confirm with a WHOIS look-up of the IP address making the change. It was --indeed --AA itself that was the source of the Wiki change that now said that Flight 11 was not even scheduled to fly on 911, had been mothballed for some 6 months as I recall. There is no information that it had been pressed into service at the 11th hour. There is simply no evidence that supports the Bush theory with respect to any of the alleged flights whatsoever.
Posted by Unknown at 9:15 AM 6 comments: