It's Time for Rush Limbaugh to Go!

Free speech is not free! It is paid for with responsibility! Rush Limbaugh, however, has made a career of "...yelling fire in a crowded theater" when, in fact, there is NO fire! Justice Oliver Wendell Holmes, Jr.'s decision re: Eugene Debs means that Rush has routinely exceeded the limits of free speech. But the Holmes decision was fallaciously applied to Debs; Rush, by contrast, is defined by shrill cries of 'fire' when --in fact --there is no fire!

We might tolerate Rush if the Fairness Doctrine were restored. His opponents would at least be heard. They are sure to be more intelligent, articulate and even entertaining; the nation would be better for it!

How long would Rush last if he had to compete in truly free market, if he were compelled by law to be responsible as I was compelled as a working broadcast journalist in major U.S. markets? I was expected to be responsible and professional; but Rush lives down to lower expectations, lower standards. He is expected, even encouraged to be irresponsible, outrageous, dishonest and boorish!

We might tolerate Rush had he ever made a good faith effort to inform his audiences with respect to real issues as opposed to his constant demoguoguery, his fussilade of lies and ad hominem attacks, propaganda, strawmen, distortions, outright lies and --most egregiously --bigotry and/or racial slurs most notably those about black athletes and, specifically, the great quarterback Warren Moon et al.

If an intelligent man like Eugene Debs --whose only crime was that of exercising his conscience i.e, opposing the U.S. entry into WWI --could be imprisoned, then Rush, who has exhorted treason and bigotry in response to phony threats and strawmen, should be held responsible for having abused 'privileges' that the rest of us had --at one time --enjoyed responsibly as 'rights'. Why is Rush given 'license' when, in fct, the rest of us are DENIED the benefits of 'free speech' by having been denied access to what had publically owned airwaves. Rush is prescisely what the GOP had in minded when, under Ronald Reagan, the Fairness Doctrine and the Communications Act of 1934 were rescinded, media 'de-regulated', a GOP code-word for consoidating the ownership of media into very few and very corporate hands. 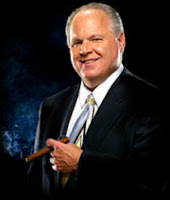 Debs was courageous and smart --a man of integrity! Rush is slimy and stupid --a charlatan! Debs spoke truth to power! Rush misleads the poor and gullible for profit! He is a corporate kiss-up, a coward, a stooge who peddles propaganda for profit! Debs accepted responsibility for what he had made of himself and was prepared to accept the consequences. Rush is a coward who blames all on 'niggers', poor people and 'liberals, LIBERALS, LIBERALS!!!

“When we are in partnership and have stopped clutching each other's throats, when we have stopped enslaving each other, we will stand together, hands clasped, and be friends. we will be comrades, we will be brothers, and we will begin the march to the grandest civilization the human race has ever known.” --Eugene Debs, American Activist

It is time for Rush Limbaugh to GO!
Posted by Unknown at 8:17 AM 8 comments: