Take Back the Media, Restore the Fairness Doctrine 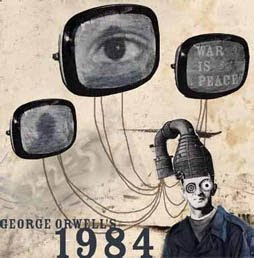 The 'Fairness Doctrine' was trashed! The right wing GOP sold 'de-regulation' with a lie. The 'Fairness Doctrine', they said, violated the First Amendment guarantee of free speech. In retrospect, the attack on a free media was based upon a panoply of right wing lies. What is free, who is free when real people have been silenced and corporations --legal abstractions --are said to have 'First Amendment' rights.

Who has free speech when a 'voice' is available only to five or six huge media conglomerates? How is freedom served when advertising revenues trickle up --not down?

The U.S. media had become a one legged, one armed bandit. The media gets huge amounts of monies from advertisers even as ownership is concentrated among six huge corporations. The 'mainstream media' disseminates, propagates and, most egregiously, endorses official, corporate, right wing lies.

The remedy: we must restore the Fairness Doctrine and put strict limits on media ownership as had been the case prior to the rise of Ronald Reagan for whom 'de-regulation' was a pay off to his base.


The 1980s produced a new trend: media consolidation. Time Inc. and Warner Communications merged to form the world's largest media organization, worth $18 billion. Gulf & Western, owners of Simon & Schuster books and Paramount Pictures, divested itself of its no media industries and changed its name to Paramount Communications Inc. Until recently, the world's largest ad agency was Saatchi and Saatchi of London, which bought 20 percent of the world's broadcast ads for clients such as Procter & Gamble. Saatchi and Saatchi had offices in eighty Cheap MBT Shoes countries. Analyst Ben Bagdikian observed in 1990, "A handful of mammoth private organizations have begun to dominate the world's mass media. Most of them confidently announce that by the mid-1990s they—five to ten corporate giants—will control most of the world's important newspapers, magazines, books, broadcast stations, movies, recordings, and video-cassettes."

The 'Fairness Doctrine' came under attack during the Reagan years. By 1990, the FCC had abandoned many rules and procedures that might have prevented broadcasters from using and abusing their publicly licensed stations in service to propaganda and/or ideology. This Reagan-era mania for 'de-regulation' made it possible for Murdoch to build an entire network around outright lies! The objective of the 'Fairness Doctrine' was, rather, the preservation of all points of view, a requirement enforced by an FCC mandate. .

The cause of 'Freedom of﻿ Speech' is not served when only one percent --the top one percent --have access to media! This is precisely the outcome that the Fairness Doctrine had sought to prevent! It was because the Fairness Doctrine succeeded that ruling elites and big corporations conspired to subvert it. Even as Murrow spoke, media ownership was dispersed. I speak from experience --most small, medium, and major market outlets were, in those days, owned locally. Limits were placed upon would-be and existent monopolies. Outlets were expect to 'serve' the localities in which they were licensed. Today --because the Fairness Doctrine is trashed by the right wing --just six or fewer huge corporations own it all. Local news and/or public service is very nearly non-existent; PBS et al must beg for money.

De-regulation, however, eliminated guidelines for non-entertainment programming guidelines. The FCC justified it all with bureaucrat-speak. Fox was thus 'set free' to propagandize and brainwash! The era of the 'media whore' was ushered in. The biggest whore of them all? FOX! Without a 'Fairness Doctrine', media whores are free to prostitute themselves and what had been the profession of 'journalism'.

In the wake of de-regulation, limits on ownership and the Fairness Doctrine, the integrity of media is suspect. For example, it is fair to ask what Fox was paid to orchestrate billions of dollars in 'free' publicity in support of Bush's war crimes in Iraq? To what 'quid pro quo' did Fox agree for its support of an oil war known to be extremely profitable for the Military/Industrial complex? Armaments manufacturers 'get paid' for supporting wars of aggression and other war crimes! I want to know how much the blood suckers in the media get paid for their share of the kill! Did Rupert Murdoch puke up a memorable quote to equal Hearsts' "...You furnish the pictures and I'll furnish the war!"

Following, another instance in which the rationale behind so-called 'de-regulation', the consolidation of media into very few hands, has had the effect of disseminating lies about the Iraq war, reducing the media to the status of propaganda 'ministry' while covering up the truth for the benefit of ruling elites, the Military/Industrial Complex and the many shills and special interests on K-Street.


A former CNN Iraq correspondent suffering from post-traumatic stress disorder says his employers wouldn't run footage he filmed of what he describes as a war crime by US troops, an Australian news source reports.

Michael Ware, who covered Iraq for CNN from 2006 until last year, describes the incident as "a small war crime, if there is such a thing."

In 2007, Ware was with a group of US soldiers in a remote village in Iraq that was under the control of al Qaeda militants. Ware says there was a teenage boy in the street carrying a weapon for protection.

‘‘(The boy) approached the house we were in and the (US) soldiers who were watching our backs, one of them put a bullet right in the back of his head. Unfortunately it didn't kill him,’’ Ware told the Australian Broadcasting Corporation, as quoted at the Brisbane Times.

Ware said his footage of the incident was deemed "too graphic" by CNN bosses to be placed on the air.

Posted by Unknown at 4:55 AM No comments: