Jefferson, Washington and Separation of Church and State

by Len Hart, The Existentialist Cowboy There may be millions of people in the United States who do not share our founders' reverance for what Thomas Jefferson called the "wall of seperation" between church and state. Many throughout the ranks of the religious right wing, for example, are eager to court bigots and fanatics, promising them a "theocracy" in exhange for their "souls". The following excerpt is typical of a "movement" to create an American Theocracy:

If conservatives are smart, we will make the GOP a relic of the past, and will go to the polls and vote the "Jesus Christ" line...Search out the spiritual life of every candidate, and eliminate those who do not follow the one true God.Long before November, we should have all of the members of our churches and their families commit to EVERYONE voting... Done properly, the turnout should be about 10% liberal and 90% conservative/Christian/ Tea-Party/etc. It would speak very loudly to have this kind of turnout.--John Stone, comment left on "The Batavian" 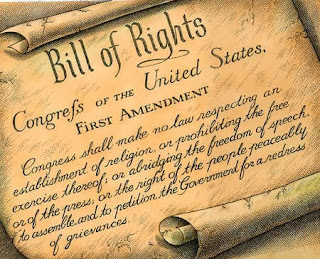 Now George Washington is reputed to have been a "man of faith". But many others were not. As many if not more are described as "deists", better described as a philosophical view of a supreme being as opposed to an organized religion. The bottom line is this: nowhere may be found any reference to "God" or deities of any sort in the Constitution. The fact of the matter is that our founders were prominently and most often not very religious. Some were Deists, some may have been atheists, and some probably did not care. That there is no clause in the Constitution that bases our nation on an "establishment of religion" is to be expected. The single most effective challenge to would be theocrats is Thomas Jefferson's famous letter to the Danbury (Connecticut) Baptists:

Believing with you that religion is a matter which lies solely between man & his god, that he owes account to none other for his faith or his worship, that the legitimate powers of government reach actions only, and not opinions, I contemplate with sovereign reverence that act of the whole American people which declared that their legislature should make no law respecting an establishment of religion, or prohibiting the free exercise thereof, thus building a wall of separation between church and state.--Thomas Jefferson, Letter to the Danbury Baptists 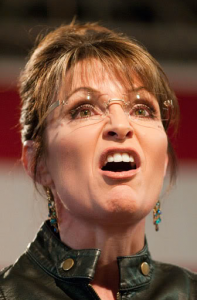 Sarah Palin is a "young Earther" who believes in a Biblical young universe, created by God just 6,000 years ago. Much longer ago was the beginning of a vast migration of an African tribe out of Africa, into Asia and eventually across the Bering Straits into Alaska enroute to what is now called the United States. (No --Sarah Palin did not see them coming from her front porch.) It is hard to imagine how they managed to begin or complete this journey if the universe had not yet been created!

As they passed through Sarah Palin's back yard, she was not at home! She may still be "out to lunch". She would not be conceived and born for at least another 30,000 years give or take a thousand. In this period of time, wolves --and nature of which they are a part --did just fine without her, without GOP fairy tales and/or lies about almost everything --science, economics, ethics, the age of the Earth and the greater universe of which Earth is but a tiny, tiny part.

Palin is proven wrong whenever we look up at night and see ANDROMEDA --the nearest Galaxy to Earth. No observatory is required. Andromeda is the only galaxy that may be visible to us via the "naked eye". It is but a mere 2.5 million light-years (2.4×1019 km) from Earth. Every other Galaxy is much farther away.

This is direct, observable, provable evidence that shatters the kooky, fundamentalist belief that God made earth and universe over a period of just six days 6,000 years ago.

Andromeda Galaxy, named for the mythological princess Andromeda, is the nearest spiral galaxy to our own Milky Way. It is the largest galaxy in what is called the "local group" which also contains the Milky Way, the Triangulum Galaxy, and about 30 other smaller galaxies.

The Andromeda Galaxy is the most distant object visible to the naked eye. Merely seeing it disproves Palin. The light from many galaxies seen in this "deep field" photograph began its journey to earth several billion years ago. Each photon from any star in any galaxy that appears in this photo disproves, if not rebukes, Sarah Palin's insistence on a fairy tale if it is not a lie.

The Lesson of Wheat 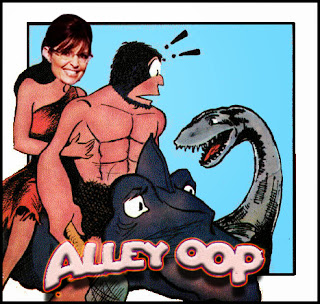 It is easy to understand that over eons, those potential ant-eaters which had longer snouts could, in fact, reach ants and thus survive and, by surviving, the organism passes on its DNA in the process. Those who could not would die not having passed on its DNA.

The difference between evolutionists and fundies is the "direction" of LOGIC from premise to conclusion. For example, every TEXAS COWBOY who has ever said: "Never kill a slow roach; you just improve the breed!" knows the truth of "evolution" if he has not thought about it in those terms. That is likewise true for every farmer who has bred for desired characteristics.

When fundamentalists deny evolution by way of "natural selection", they mistake outcomes for causes. Conclusions must derive from premises or unexplained facts!

At last, there is the problem of wheat! Wheat does not grow in the wild. Would fundamentalists have us believe that there was a "special creation" of WHEAT? The best hypothesis is that wheat evolved from prairie grasses long, long ago perhaps aided, initially, by ancient farmers.

The Elites Do Not Create Jobs; They Export Them!

Some years ago, I covered a news conference held in Houston by Milton Friedman, the darling of the U.S. right wing for his near laissez-faire economic perspective. Friedman was wrong but would never admit it. In fact, when someone raised the issue of "job exportation", Friedman

was adamant: "jobs are not exported!" The working person knows better!

At last, a major media outlet is telling the truth about economics! "Business Insider" now says: "Sorry, Folks, Rich People Actually Don't 'Create Jobs'! They are a bit late! I was saying that in my very first economics class as a Freshman. I never believed that "wealth trickled down" or the focus group approved label: "supply-side economics". It was all bunkum when Reagan exploited it to float his tax cuts for the very rich; it is bunkum now but, alas, too late to prevent the decline of U.S. industry --steel, automobiles, radios, electronics. Those industries are now dominated by China and Japan. Wal-Mart may be their "agent" in the U.S.


"As America struggles with high unemployment and record inequality, everyone is offering competing solutions to the problem. In this war of words (and classes), one thing has been repeated so often that many people now regard it as fact.

Specifically, by starting and directing America's companies, entrepreneurs and rich investors create the jobs that sustain everyone else.

GOP right wing elitsts are wrong when they propose that wealth is the creation of ultra-super rich tycoons, robber barons, the top 1 percent. These folk do NOT create wealth; rather --they siphon (or suck) the wealth that is, in fact, created by labor. The very rich move money around --most often to offshore accounts. Even the conservative economist Adam Smith (the father of modern economics) believed that "value" was created by "labor".

Related is the fact that the U.S. is no longer a NET EXPORTING NATION. We occupy the very bottom of the CIA's own World Fact Book with the world's LARGEST NEGATIVE Current Account Balance (formerly called the Balance of Trade Deficit); Guess who is on top!! CHINA! It is easy enough to trace this trend to Nixon's trip to China. I have reason to believe that the trip had been set up by Bush Sr. It may have been the high price U.S. labor was forced to pay to get our sorry asses out of Viet Nam.

I must hasten to add that neither Obama nor Clinton is responsible for this outcome. The details of America's "new" relationship with China was worked out during the Nixon administration --most obviously by George H.W. Bush, Nixon's "special envoy" to China. The result of these U.S. trade concessions may be seen in in the aisles of Wal-Mart, the empty houses in Detroit, the stilled mills in Pittsburgh.