ENOUGH IS ENOUGH --DOWN WITH COPS!

My comments are inspired by a story that Jay Diamond had posted on Facebook:


Federal investigators have opened an inquiry into the tragic case of a high school student in Bastrop County, Tex., who suffered severe brain damage and nearly died last fall after a deputy sheriff shocked him with a Taser, a high voltage electronic weapon.
In North Carolina, civil rights lawyers have filed a complaint with the Justice Department, charging the Wake County school system with violating the constitutional rights of minority children by subjecting them to discriminatory arrest practices and brutality by police officers assigned to schools. In one nightmarish case described in the complaint, a disabled 15-year-old was shocked with a Taser three times during an interrogation at school, resulting in punctured lungs. And in New York, civil rights lawyers have sued the city of Syracuse on behalf of two students. One was shocked three times, not for threatening behavior but for lying on the floor and crying, they say, and another was shocked while trying to break up a fight.

Psychopathic cops should be locked up and tried; in those cases resulting in death i.e, "murder", they should be tried and, when found guilty, executed! 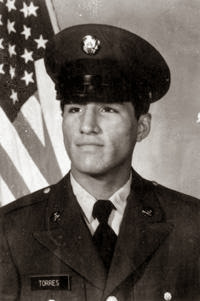 I covered the trial of two Houston cops who were charged with having beaten hell out of an Hispanic war hero who got a little rowdy in club. Twenty-three year old Joe Campos Torres [at right], a 23-year-old Vietnam Veteran, was was beaten by several Houston police officers and then taken to jail. The jailer refused to admit him and ordered the cops to hospitalize him. Instead, the cops (whose trial I covered) took him --in the dead of night --to a bridge over Buffalo Bayou where they beat him to a pulp. Just barely alive, he was leveraged over the bridge and dropped into the inky dark waters of buffalo bayou some 15 ft below.He drowned.

I covered the trial after both cops were charged for murder. Both were acquitted! Outrageous! His death sparked protests and the outcome of the trial was met with rioting.

In a civilized society, a police force is expected to uphold the "rule of law"; they are not required or expected to take the law into their own hands. At the very least, rogue and criminal cops must be arrested, arraigned and made to stand trial for felonies to include assault and battery and murder!
My two cents worth: a nation, an empire is finished when it cannot rule itself, when it cannot distinguish between the rule of law and the ABUSE of law!

Posted by Unknown at 4:54 AM No comments: