The Lessons of Recent History

In his essay on Shakespeare's “Julius Caesar”, W.H. Auden observed that theatrical directors throughout the 30's found it quite natural to make of Caesar a great fascist dictator, more like Mussolini than Hitler. The conspirators, he claimed, were “liberals”. Up to date analogies are irresistible. For a brief period not long before Iraq fell into utter chaos, it could be said that George W. Bush had “...crossed the Rubicon”. There are better analogies to be made. 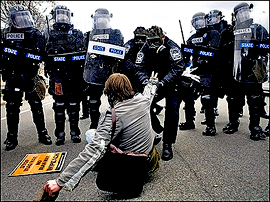 In 1947, Auden would say of Shakespeare's Julius Caesar that it had “great relevance to our time”. That is still true, though Auden believed that Julius Caesar was about the society of ancient Rome on the very edge of doom. Auden did not believe that to be true of Western Civilization in 1947. But is it true of the US, Britain, and Western Civilization today? Are we perched on the edge of doom?

Historically, Octavian would “ride the storm” eventually prevailing at Actium, and, assuming the title “Augustus”. He would give to Rome another 400 years. One suspects that Octavian's prospects were not nearly as gloomy as those we face today.

Auden would write of the post Roman-Hellenic world that it collapsed of a spiritual failure, a lack of nerve, an inability to make sense of what was going on. This is the analogy that is to be made with the present. It is not surprising that a far flung war begun upon a pack of malicious and deliberate lies would drag on for four years. It did so because few in power understood the “story” behind the day-to-day news. The BBC stated flatly: the Iraq war has sent shock waves throughout the Middle East that will be felt for a generation. That is, in fact, an optimistic assessment.

There was yet another layer of complication. It had to do with the sense of community found lacking in America and, perhaps, to a lesser degree elsewhere. Auden makes much of the manner in which Shakespeare begins his plays. “First things in Shakespeare are always important”, he writes. It is, therefore, significant that Julius Caesar begins with a crowd scene. It is just as significant that Bush Jr seized the White House following a “stolen election” and the very worst Supreme Court decision (Bush v Gore) since Dred-Scott.

A “crowd” is always one of three important types: societies, communities, and crowds. One belongs to a society in which the individual has a function or to which one contributes in one way or another. Communities are composed of people who share a common love, goal or culture. Crowds, by contrast, are composed of members who neither belong nor join. Members of crowds are mere numerical additions to the crowd. The crowd, Auden writes, has no function. That cannot be said of the “criminal gang” that attacked vote re-counters in Florida.

Crowds arise when communities break down, when individuals for various reasons cannot share a common culture, love or enthusiasm with others. Education, says Auden, has little to do with it. Knowledgeable, highly educated people often become members of crowds for various reasons and thus help drive the enigma of fascism.

An over-simplification is tempting. Crowds are fertile ground, nurturing fascism and other forms of authoritarian governments and regimes. This was witnessed in Germany as A. Hitler rose to power. If the manner in which Shakespeare begins his plays is important, then it must be pointed out that Julius Caesar begins with a crowd scene and ends with the loss of Republic.

A crowd is most often ugly, fickle, angry yet manipulable. Kierkegaard would write of the public as merely a large crowd, “...a Roman emperor, a large well-fed figure, suffering from boredom, looking only for the sensual intoxication of laughter.” He would call the “press” the “public's dog” that is often set upon the truly great. Thus, the crowd, manipulated by demagogues and charlatans, becomes a mob.

I submit that the increasingly isolated, suburban nature of American society, in the midst of plenty, devolved into islands of isolation. The word community merely attached to a soulless suburb does not make a real community. It's only a sub-division at best. At worst –a dormitory. An affluent America became a nation of crowds, a public only loosely held together, isolated by the science of demographics whose very purpose is separation and analysis.

Given those conditions, the events of 911 were exploitable. America became an angry mob. The conditions were ripe for a would-be dictator to seize “the crown”, vowing as he did to “...export death and destruction to the four corners of the earth.” This would-be Caesar was hardly swept into office with a genuine popular mandate. Many say the election was stolen. I am among those who believe that. Certainly, Gore received more popular votes in Florida. But for 911, Bush might have been retired.

By the time Bush had survived a full term, there was little hope that a new Congress would force a positive change. I was always hesitant to believe that Congress truly knew what was going on. Until America finds its soul, its sense of real community, it will remain like a latter-day Roman-Hellenic world on the edge of doom. There is no Octavian in the wings. There is little hope that our nation will survive another 400 years or so.
Posted by Unknown at 6:37 AM 9 comments:

The Day the Earth Stood Still

I just watched –again –the Keanu Reeves version of 'The Day the Earth Stood Still', a high tech re-write/re-make of the original with Michael Rennie as Klaato. Both versions are allegorical, high-tech “scripture” in which a “being” from “the heavens” comes to earth where he is presumed to have “died” for our sins. Does this sound familiar? 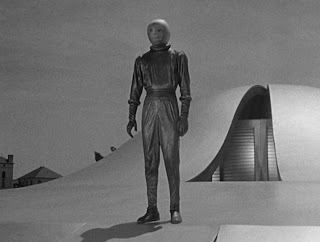 Klaatu arrives on earth with a message: people of Earth, get a clue, resolve your differences, shut up, get your shit together! In the original, Klaatu (Michael Rennie) assumes the name “Carpenter”. Again –does that sound familiar? What biblical character do you know who was a “carpenter”?

Both film and Bible versions are parables in which are found expressions of our desire to be “saved”, specifically, we seek to be saved from ourselves.

Unlike the King James version, Klaatu does not go around preaching or healing the sick. In the original version, there is a “resurrection” in which Klaatu, is restored to life. Like Jesus, Klaatu appears once again before the “assembled peoples” (disciples?) with a final warning which translated into contemporary American “English” is “this is your last chance to get your shit together!” Then, returning to his spaceship, he leaves the Earth. In Hollywood-speak, it's “the new testament meets Roswell”.

In the first film version, the black and white version, Klaatu leaves us with a warning that ultimately there is no savior but ourselves! But –would he not have been a savior had people listened? Would not the Biblical “Jesus” have been a savior if things had just worked about a bit differently? It seems to me that a “savior” is a cultural-literary icon or archetype. Klaatu, for example, just “laid it on the line”. In so many words, he told “us” to take responsibility for what we have done with our selves and our planet --the only planet on which it is known that we can live! Mere belief or faith is no salvation nor are they a substitute for responsibility and positive action.

Klaatu's message is like that of a stern parent: grow up! Clean up your own room! Don't make life miserable for other people! Respect the environment! Live with it! It is because of this that Klaatu will never be confused with the modern protestant conception of Jesus. Klaatu did not "put on" a phony “sincere face” just before passing the plate. You won't find a Klaatu-Jesus discussed in the huge mega-churches (Lakewood, Houston) which, because of their obsession with amassing vast, very worldly fortunes seems at odds with either Klaatu or that “Jesus” of scripture who performed miracles in order to feed a multitude.

Today, those who support the mega-churches are probably inclined to chalk up your poverty to your wicked ways, your refusal to kiss up to icons and self-appointed prophets (profits?). Did "Jesus" blame the victim as the new "churches" clearly do?

Both films and the New Testament are artifacts of a culture which after some 2,000 years has yet to grow up, has yet to accept responsibility for its own fate, has yet to accept responsibility for taking the world to the brink of nuclear destruction to say nothing of the human war on the natural environment. If we should destroy ourselves in a nuclear holocaust who is to blame but ourselves?
Jean-Paul Sartre said: "A man is nothing else but what he makes of himself!" It is as true to say of the human race that we have nothing to blame but ourselves if we should “choose” to become extinct at the end of a world-wide conflagration of our own making.