Europe is a life changing experience for many Americans, an important part of the 'American Experience'. The most obvious examples are famous writers from Thomas Wolfe to Ernest Hemingway'. They enriched American literature with their often personal experiences of Europe. Artists like James Whistler and John Singer Sargent were at once fresh eyes in Europe and glimpses of rich European culture for Americans. America's greatest cultural achievements may have been born of or inspired by the need to escape America.

I recall reading the 'Story of a Novel' by Thomas Wolfe at about age 15. I was deeply impressed by the 'homesickness' for America that Wolfe felt as he sat near the Champs-Elysees. Something about it --I think it was smell of mowed grass --reminded him of watermelons on the Fourth of July. An iron railing flashed him back to the board walk in Atlantic City. At the end of this journey of self-discovery in Europe, Wolfe had written 'Of Time and the River'.

It is an American tradition to leave America. In the 1995 remake of Sabrina with Harrison Ford and with Julia Ormand as Sabrina, there is a scene in which Sabrina's letter to home is heard in an off screen voice. Of Paris, she said: "...I found myself in Paris." Appropriately, La Vie en Rose was playing in the background. Fiction, perhaps! Nevertheless many Americans have found and continue to find "themselves" abroad. This is a Jungian journey of self-discovery as is life itself. 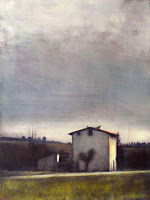 The only way to truly know your own country is to travel to some other country. The only way to understand or find yourself is to abandon your "self" and realize that the "self" is an invention and an illusion.

It is often described as a feeling of having recovered something lost. But that is what Americans have always done in Europe. The French relate to America in that respect. This 'American' story or archetype is an existentialist journey and thus the very core of French philosophy. It has been so since Descartes wrote: "I think, therefore, I am". From this 'cogito', Sartre would extrapolate: "A man is nothing more than what he makes of himself". British philosophy, by contrast, is objective.

I had been to Europe five times now; each time I had come with delight, with maddening eagerness to return, and each time how, where, and in what way I did not know, I had felt the bitter ache of homelessness, a desperate longing for America, an overwhelming desire to return.

During this summer in Paris, I think I felt this great homesickness more than ever before, and I really believe that from this emotion, this constant and almost intolerable effort of memory and desire, the material and the structure of the books I now began to write were derived.

I am not alone but among many influenced by 'The Creative Process' , an anthology of original thinkers of many nationalities.

I'm very touched to find this book again as I browsed through the net, 25 years after I first bought it in a flee market in New York. The essay by Henry Miller, literally blew my young artist mind back then. It inspired me to follow on his crazy steps. I quit my civil service job(without official leave) and went to Paris ,where I lived for ten years. I read and re-read that essay on creativity and it just kept giving me the courage to step further into the unknown, thus changing my life completely.

The great American exodus may have begun with the "expulsion" of Tories during the Revolutionary war. Most went to the Canadian provinces, but between seven thousand and eight thousand went to England --notably Thomas Danforth who had practiced law in the colonies.

Later, Judah P. Benjamin, the Confederate Secretary of War and Secretary of State, fled to England and became a successful lawyer. Other "confederates" fled to Canada, Japan, Australia, Egypt, Mexico, and Central and South America.

Most of the expatriates congregated in Paris, France where they lived for several weeks, months, years, or even for the rest of their lives. During the 1920s, Paris was a bustling cosmopolitan hub where a rich history converged with a blossoming artistic community.

It was considered to be the cultural capital of the early twentieth century. Attracted by this atmosphere, the expatriates settled in Paris hoping to establish their literary identities and find a market for their work. Nevertheless, each author found a varying degree of success while living and writing in Paris. F. Scott Fitzgerald, as compared to his friend and fellow author Ernest Hemingway, was much less productive in the mid-1920s

John Singer Sargent was of another type, born of American parents in Florence. He grew up speaking several languages, most certainly English, French and Italian. 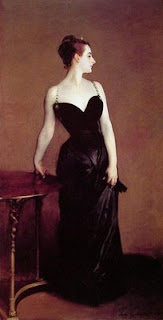 His 1884 portrait of New Orleans born Virginie Avegno Gautreau --better known as Madame X --became his most famous portrait. It's hard to imagine how one succeeds in scandalizing a society in which men were expected to have mistresses. Nevertheless, a single strap off the bare shoulder was too much for polite society. The hubbub persuaded the artist to quit Paris for London. He would not see America until 1887.

Many expatriates returned to US but --in the early 1920s --many returned to Europe. Their complaints about postwar American culture --standardized and vulgar --reverberate today in contemporary criticisms of FOX, football, and Limbaugh. For them --as well as contemporary American critics --Europe represented ancient wisdom, a sense of history lost amid post-modern Americana and suburban sprawl, mass media, Walmarts, and super-sized fries.

Though not an expatriate, William Wordsworth wrote of London:

Earth has not anything to show more fair:
Dull would he be of soul who could pass by
A sight so touching in its majesty:
This City now doth, like a garment, wear
The beauty of the morning; silent, bare,
Ships, towers, domes, theatres, and temples lie
Open unto the fields, and to the sky;
All bright and glittering in the smokeless air.
Never did sun more beautifully steep
In his first splendour, valley, rock, or hill;
Ne'er saw I, never felt, a calm so deep!
The river glideth at his own sweet will:
Dear God! the very houses seem asleep;
And all that mighty heart is lying still!

My first such impressions of London were not from Westminster Bridge looking east but Blackfriars looking west in the damp gray cold --London weather at its worst. That the Thames looked like gray slate did not deter the intrepid racers rowing quickly upstream.

Later, of course, I would find Wordsworth's "London" from Westminster, just below the statue of Boudicca, a symbol of every people's revolt against tyranny and empire.

Indeed, what American, longing to find what had been lost in him/herself, could pass the piazzas of Florence, the cafés of Paris, the coffeehouses of Vienna, the cabarets of Berlin, the pubs of London and not be inspired to rediscover those parts not nurtured back home in Indiana or perhaps deliberately scorned in Texas? The tradition is not passive flight; it is the active embrace of life itself.
Posted by Unknown at 7:06 AM 6 comments: