Texas Prisons May be Worse Than Abu Ghraib 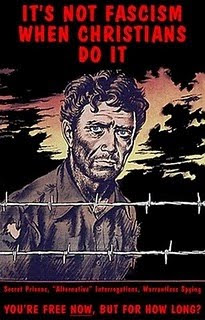 The back to back debacles of Bush-Perry have turned the state prison system into a domestic Abu Ghraib in which 'prisoners' are tortured, attacked by dogs, shocked and, in other ways abused, exploited, humiliated, terrified while guards look on and laugh. Others like Bush himself, we suspect, get there jollies. The state of my birth has, under the utterly evil and/or incompetent GOP/right wing rule and exploitation, become an unimaginable hell-hole where poorer children are consistently, deliberately left behind to become fodder for the Fascist-Nazi corporate prison system.

At the same time, the Bush/Perry prison is ripping off Texas taxpayers as we post, reporting one price for public consumption as a much, much lower price is paid in fact. One wonders: who gets the loose change? Who is literally skimming money, bilking the taxpayers of Texas for millions!

The emerging details confirm my suspicions and my earlier articles about the Bush/Perry perversion of justice in Texas. The back to back Bush-Perry regime have made of Texas the fascist template that will most surely extend to all of the United States should the GOP ever gain control of both houses, the Presidency. It already has a 'high court' in its pocket. The recent decision re: corporate personhood is but an omen of much worse to come. Scrotus has proven itself ready and willing to rubber stamp any Fascist - Nazi scheme that a Bush enamored GOP may embrace and/or puke up.

Or, Texas Department of Criminal Justice (TDCJ) in its seven (7) or more branches: TDCJCID (Correctional Institutions Division), TDCJSJ (State Jails), TDCJPD (Parole Division), plus “therapeutic facilities,” “transient facilities,” private prisons by Wackenhut and C.C.A. (fully paid by TDCJ), sundry reparole/prerevocation” facilities, “industrial units” – you counting them? – then 14,000 state felons kept for months in county jails at TDCJ expense for lack of beds in the Greater TDCJ. Each a separate state prison system. Holding some 230,000 inmates – the exact number a heavily guarded secret. World’s highest incarceration rate of 1000 per 100,000 population – ten times England’s, 14 times Cuba’s – plus another 700,000 Texans on parole supervision. Half of this mass of humanity “people of color.” For each adult in prison, count at least one underage child being raised on the streets without parental supervision: “the next TDCJ generation.” If you, dear reader, thing that Abu Ghraib or Gitmo – or tens of secret Gitmos in “friendly” eastern European and third world nations – are but “exceptional mistakes by a few bad apples,” then you been brainwashed by the soothing snake oil of fascist propaganda. In the late 1990’s some TDCJ whistleblower leaked the “Brazorial County Training Video,” that soon made coast to coast telenews sensation: prisoners chained on floor, screaming in excruciating pain, while attack dogs held by laughing prisoncrats bit them over and again. This horror film was a training video to teach newly-hired prison guards! Texas governor then was George Walker Bush: current de facto misruler of the U.S.A.George W. Bush comes from a long line of criminals and traitors. Hist great grandfathers were Herbert Walker and Prescott Bush, who in the 1930’s ran a New York bank and associated string of dummy businesses whose only realy aim was to launder money for the Nazi regime in Germany. And kept doing so until October 1942 – nearly a year after Pearl Harbor and the U.S.A at war with Germany – when the FDR administration expropriated the lot under the Trading with the Enemy Act. A fact of public record1 yet not a word about it in our flamboyant and ohsofree mainstream press. In 1994 the TDCJ employees PAC – “political action committee” to donate campaign funds and for heavy handed strongarm tactics “to get the vote” helped Bush defeat incumbent Ann Richards for governor of Texas. TDCJ then had a total of 72,000 prisoners: deemed “overcrowded” by the federal Ruiz Court. In payment and gratitude, in only 16 months, by June 1996, Bush caused TDCJ population to swell to over 150,000. By appointing or manipulating a Board of Pardons and Paroles – BPP, then wholly separate from TDCJ – to cut parole releases from a historical average of 85% of those eligible, to a mere 16%! Ever since the TDCJ has steadily increased, based on parole release rates fluctuating from 20% to 25% of eligible inmates.

In 1994 TDCJ was “pestered” by having to answer citizens’ requests under the Texas Open Records Act (TORA), prisoners among the most zealous watchdogs of TDCJ shenanigans. Such as the “VitaPro scandal” for which TDCJ Director Andy Collins got convicted in Houston federal court; but many other scandals, like the “visitation room pizza scandal” or when some 1000 lavatories for which taxpayers paid $200 apiece, were switched with others costing $10 at KMart. Or when the pickup truck of TDCJ’s overall general auditor was found near Huntsville full of bullet holes and blood all over, but the FBI found, two years later, the “victim” alive, well, and much richer in Pennsylvania. Well then, Bush signed into law Government Code 552.028 by which TDCJ may refuse any disclosure by simply saying it came from a prisoner, or (no proof needed) by a “friend of prisoners.” Tus freed from any and all public scrutiny and free to commit any crime with full impunity – theft, murder, drug traffic, fraud, “pork barrel contracts”: all of which TDCJ prisoncrats do! – the honest public servants in the various TDCJ’s went into an allout spendthrift and grand larceny crime spree. Which just in 2006 totalled $17.5 billion expenditures! --Ana Lucia Gelabert, Some Facts You Should Know About Texas Prisons

When Bill Clinton was President, 'Judge Dredd' was just a futuristic movie in which a fascist regime presided over a two-tiered society. Miranda protections are non-existent and 'justice' is administered on-the-spot by armed 'judges'. The future is now.

Under Bush/Perry, Texas had become the lab study, the model upon which a fascist state may one day pattern itself should the GOP regain the absolute power it almost had under Bush Jr. The key to the GOP plan in Texas is education on the one hand, the prison system on the other. One hand washes the other in a diabolically simple plan, in fact, a laundered payoff:
There are precedents in Nazi Germany. I.G. Farben, as I recall, developed Z-klon B, thereby benefiting greatly by the crime of genocide. I.G. Farben was, thus, rewarded for its support when Hitler passed the plate at a meeting attended by Farben, Thyssen, Krupp and, I seem to recall, a representative of the American Ford Motor Company.

Why is education the key? Simply: if you don't get skills, you don't get a job! The corporate prison system is assured an income, a full-house as it were, as long as Texas competes with the likes of Mississippi for dead last in high school graduations.

Naturally, the axis of Bush/Perry denied their dismal record. They tried to cover up Texas’ dropout crisis by falsifying dropout numbers. In fact, at least 3 in 10 Texas high school students do not graduate from high school. Bush-Perry and the GOP did NOT want you to know that and lied about it. As the Houston Chronicle reported in their story,

Poverty, dropout rates bode grim future for state", the dropout﻿ crisis will have serious long-term damage to our state’s economy if Rick Perry continues to cover-up the problem.

It does not matter to Bush/Perry and the Nazis and Fascists who have enriched themselves at the expense of you and I. It does not matter to Bush or Perry that while Texas is 'big' on capital punishment, the industrialized application of the death penalty simply cannot kill off the criminals as fast as they procreate and multiply. Because crime rates seem always higher in death penalty states, the GOP will not get a free lunch. A price must be paid. Ergo: the GOP may be seeking a "final solution".

...by year's end 1999, there were 706,600 Texans in prison, jail, parole or probation on any given day. In a state with 14 million adults, this meant that 5% of adult Texans, or 1 out of every 20, are under some form of criminal justice supervision. The scale of what is happening in Texas is so huge, it is difficult to contrast the size of its criminal justice systems to the other states' systems it dwarfs:

Texas is called the gulag state for good reason. Justice in Texas is applied inequitably. Minorities --primarily black and Hispanic --are disproportionately represented in the Texas gulag system but under represented in the State legislature, the various city councils, and the state judicial system.

If nothing changes, average TX household incomes will be some $6500 lower in 30 years than in 2000, acc to projections. It﻿ could be even worse: the number is NOT adjusted for inflation. The GOP does not want to talk about this. The GOP would rather demagogue this issue. The GOP does not want you to know what miserable, bald-faced liars they are.

In the meantime, they will exploit the inevitable rise in crime. They will contract out the eventual imprisonment of every child that is routinely left behind. They will try to distract you with BS about immigrants when, in fact, the real cause of increasing crime is not due to illegal immigration but, rather, it is the inevitable result of GOP incompetence, greed and their deliberate, fascist exploitation of the prison system for the enrichment of an increasingly tiny elite. That's true in Texas --the GOP fascist lab --and it is true wherever the GOP infestation has managed to plant its crooked root.