The Myth of Military Keynesianism

Military Keynesianism is another myth of dubious origins. In 1933, John Maynard Keynes wrote an open letter to President Franklin Roosevelt urging the new President to borrow money to be spent on public works programs:

“Thus as the prime mover in the first stage of the technique of recovery I lay overwhelming emphasis on the increase of national purchasing power resulting from governmental expenditure which is financed by Loans and not by taxing present incomes. Nothing else counts in comparison with this. 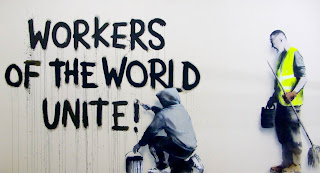 In a boom inflation can be caused by allowing unlimited credit to support the excited enthusiasm of business speculators. But in a slump governmental Loan expenditure is the only sure means of securing quickly a rising output at rising prices. That is why a war has always caused intense industrial activity. In the past orthodox finance has regarded a war as the only legitimate excuse for creating employment by governmental expenditure. You, Mr President, having cast off such fetters, are free to engage in the interests of peace and prosperity the technique which hitherto has only been allowed to serve the purposes of war and destruction.--Keynes, John (1933). "An Open Letter to President Roosevelt". Retrieved 2011-08-01.

How many people do you know build 'tanks' for a living? You've heard of beating swords into plowshares: how often do you suppose plow-shares become tanks and what is --in fact --the effect on farming when that occurs?

A nation that believes it can sustain a viable population by the mere production of arms is deluded. Moreover, if 'we' can build tanks --why are we no longer leading the world in the production of automobiles?

Why are we no longer leading the world in the production of steel?

Why are we no longer the world's breadbasket?

When was the last time you heard about the thriving steel manufacturing town of Pittsburgh?

If you believe that these things are trivial, check out the CIA's own World Fact Book. At the very top you will find CHINA with the World's largest Positive Current Account Balance!

Ah --at last --there is the United States at the very bottom of the list with the World's largest NEGATIVE Current Account Balance [formerly called, in our case, the Balance of Trade deficit]. In a word --CHINA owns us and keeps us fat and happy --like cattle! We have to be kept afloat! Otherwise, where would China dump its cheap crap.

One wonders how many American jobs have, in practice, been exported to China? How and why has this come about? This trend is traced to Nixon's trip to China; the groundwork for his historic trip was laid by one George H.W. Bush with whom I spoke on this very topic years later! Somewhat simplistically, Bush sold out American labor. It was the high price we paid to get out of Viet Nam.

'Reaganomics' bears NO resemblance to Keynesian economics in either theory or result! Keynesianism works; Reaganomics never worked and never will. Arthur Laffer, himself, may have regretted the sorry fraud! Laffer called it a "theoretical curve". Whether or not it was drawn on a napkin (as legend has it) matters not. It was assumed that tax cuts would stimulate purchases and sales generally. The reverse happened because only the very rich, an elite in fact, benefited from the tax cuts. The needs of the very rich were already met; the elites had simply squirreled away their winnings in offshore bank accounts, beyond scrutiny. The 'tax cuts' were a windfall easily tucked away. As a result, no jobs were created as a result of the infamous Reagan tax cut.

"Supply-side' economics is simply a failure, perhaps a PR stunt. The term 'trickle down theory' describes it perfectly; but the term originated earlier, with Will Rogers who said that money was "...appropriated for the top in hopes that it would trickle down to the needy."

Laffer's curve never described reality. Had he been alive, Keynes would have denounced the reduction of growth in the money supply. The slowing of growth, indeed, the actual 'shrinkage' of the economy overall combined to create the 'perfect storm better known as the recession of 1981–82! It was the worst recession since H. Hoover's 'great' one! It is Reagan's legacy of failure and dimming hopes for all but the very, very, very rich.

Thus --the Reagan years are recalled as the era of huge budget deficits, low interest and inflation rates, and a depression of some two years, the deepest, longest since H. Hoover. The 'wrong' people benefited from GOP largesse --a depression resulted. One wonders how many $millions wound up in offshore tax havens following Reagan's 'welfare for the very rich'! We may never know. It was wealth forever lost to the U.S. economy.

Neither Laffer's curve nor Reagan's tax cut were Keynesian; Keynes is famous (or infamous) for his hypothetical about which he said the govt should bury pound notes in a landfill and let the people dig them up! Indeed --Reagan would have done much, much better had he done precisely that! Alas --he did not!  His 'tax cuts' did not benefit those whose expenditures would have 'stimulated' the flagging economy. Nor did the ruling elites invest them as Keynesian economics might require; certainly they were not invested in ways that create jobs or spending. Rather --they were banked offshore, representing a contraction/depression/a net loss of jobs and GDP, i.e, a depression of some two years, the worst such depression since H. Hoover's Great Depression of the 1930s.

'Wealth inequities/disparities' are the result of Reagan's tax cuts which benefited only the top 20 percent! Subsequently, the top 20 has, at last, become the ruling elite of just 1 percent which owns more than the rest of us combined. That's because however the rich are taxed, the 'tax burden' they experience is less than that experienced by the middle and poorer classes. That is the case because a flat tax of any 'percentage' is a greater burden to those who must always spend a much larger percentage of their income on mere necessities --not the least of which are roof and food!

'Necessities' are a much smaller percentage for ruling elites for whom the 'size' of a mansion is not a necessity but a luxury, for whom the swimming pool is not a necessity but is expected of his/her 'class', etc etc etc. Items most often indulged by 'elites' are unlikely to stimulate a domestic economy in any case. And as the number of very rich persons declines, their impact on the economy declines.  In the mansions of the very rich may be found luxury items the purchase of which will not improve the lot of a steel-mill worker or the men and women who used to make cars in Detroit.

Many credit WWII with ending the 'Great Depression". In fact, as it was waged WWII was NOT a 'massive stimulus' nor was it Keynesian. When demand is low, there is always the risk of 'gluts', over-production, expanding inventories. Some have proposed that during these times, a 'convenient' war may 'pump-up' demand!

Malthus, as I recall, advocated convenient wars to 'pump up demand'! That makes very little sense. On the one hand, a war-time government urges austerity while it utilizes existing resources to oppose the 'hun'! Thus what happened in the U.S. during WWII was hardly 'Keynesian". In fact, a variety of shortages severely inconvenienced the civilian population. Having spoken with many who lived through it, I have concluded that it was not the so much the war that stimulated U.S. growth but its end. Two 'booms' followed the return home of troops: 1) industry for which the troops were needed 2) a 'baby boom' as a result of families re-uniting.

While war was waged, many imported items were no longer available; the U.S. was at war with nation's that made and exported them to the U.S. Notably --sugar and coffee were very scarce. In fact, COKE (which things go better with) was scarce or unavailable most probably because sugar was scarce. Other things disappeared entirely --silk stockings among them.

In response, salvage campaigns encouraged people to save things like scrap metal, rubber, cooking fat! From these items weapons, ammunition, gas masks and explosives were made. A truly 'Keynesian' expansion of the economy cannot be read into this experience. There are no austerity measures in a Keynesian expansion driven as it is by more money in the hands of more people who will use it to buy more products and services. In war time, many 'consumers' are at war while those left on the 'home front' are expected to practice certain austerity measures. 'Austerity' is rarely Keynesian and certainly not Keynesian in this respect.

Posted by Unknown at 7:01 AM No comments: