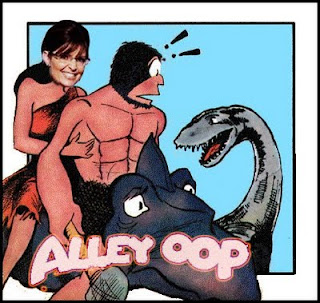 Richard Dawkins was recently issued a challenge --disprove creationism in one sentence. I can do that myself. Here it is: if we can see Andromeda﻿ --some 2.5 MILLION light years distant from earth --then creationism is false!

Andromeda can be seen even with the naked eye; in any case, it takes light from Andromeda some 2.5 MILLION light years to get here and be seen. That we can see these objects with or without telescopes utterly disproves creationism and a 'young Earth' or young universe.

I chose Andromeda because it is accessible, close enough to be seen with a good pair of binoculars, perhaps, even, with the naked eye. I saw Andromeda as a kid with a pair of hand-me-down 7x35 binoculars duct-tape to a shaky tripod. Deep space images from the Hubble are, of course, state of the art and much more dramatic. Galaxies some 17 BILLION light years distant prove that the Universe is considerably older than Sarah Palin's idiotic concept that homo sapien co-existed with dinosaurs a mere 6000 years ago.

Astronomy mag has an excellent article about how distances are determined. And the speed of light is a universal constant. [See: The Michelson-Morley Experiment. Michael Fowler, Univ. Va. Physics 9/15/08. ] These are not 'assumptions'. This is established, empirical science.

That issue is settled --the speed of light is not an assumption but a proven empirical fact! And so too are the distances to nebulae and galaxies much farther distant than Andromeda.

There are likely to be galaxies that formed slightly earlier, which so far we haven't been able to detect because they are so faint and distant.

So if more powerful telescopes can't enable us to see any further into the universe why are we still building them?

Lomb says larger telescopes will be more sensitive and enable us to look into the past of the universe more clearly.

"There's still the great mysteries of what happened between 13.7 and 13 billion years ago," he says.--What is the most distant galaxy a telescope can detect?

Below is the Hubble Deep Space photo. Every galaxy in the photo disproves Sarah Palin's 6000 year old universe. 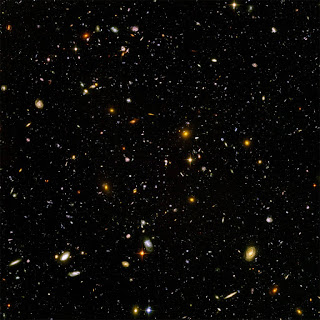 Pick a galaxy at random. Imagine that you are an intelligent being living on a planet -- just one of a multitude of 'solar systems' that most certainly exist in this vast cosmos! Imagine that you have struggled with the concept that should your civilization develop craft capable of near light speed, it may yet take a million or more lifetimes to reach our own galaxy --the Milky Way and, when reaching it, 100,000 additional years to traverse it!Syndicated 'Cowboy' Articles
Bluebloggin

How the Iraq War Destroyed the US Economy 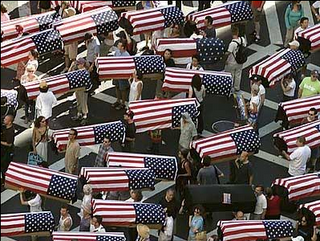 Wars reduce the GDP, destroy jobs, reduce productivity, and increase the trade deficit! If wars are 'bad' for the economy, then how are they sold so easily? The quick response: they are sold with focus group tested bullshit!

There's a 'living' in killing, we are told! There is a more opulent living in the commission of mass murder which requires the construction of tanks, smart bombs, and fighter jets --the MIC, in other words. But that's all just snake oil for idiots and Republicans!

That wars are good for the economy is just a bald-faced lie cooked up by the defense lobby for whom killing IS a living but only for the shrinking one percent who benefit: the Military/Industrial complex, truly MURDER INC. Fact is war is most often disastrous for the economy.

In fact, most models show that military spending diverts resources from productive uses, such as consumption and investment, and ultimately slows economic growth and reduces employment. In this way, military spending is comparable in most models to any other form of government spending, such as spending on public goods or improving the environment.This paper shows the projections of the impact of an increase in annual military spending equal to 1 percent of GDP (approximately the actual increase in spending compared with the pre-war budget) of the Global Insight macroeconomic model (see Appendix). The Global Insight model was selected for this analysis because it is a commonly used and widely respected model.1 Other models will show somewhat different projections, but it is unlikely that the direction of the long-term impact on any of the key variables will be different. In fact, because of the structure of the Global Insights model, it likely understates the negative impact of military spending relative to other models.

--The Economic Impact of the Iraq War and Higher Military Spending>

At the link (a PDF file) look for Table 1 which shows the key differences in projections, at five year intervals, between the baseline model and the simulation assuming higher levels of defense spending.

The decline in GDP projected for the twentieth year in the high military spending scenario is $42.1 billion. This corresponds to a projected loss of 668,100 jobs. Inflation is projected to be 0.7 percentage points higher in the high military spending scenario, with the interest rate on the 10-year Treasury note 1.1 percentage points higher than in the baseline scenario.The higher interest rate is associated with a reduction in industrial production of 1.8 percent compared with the baseline scenario. Car and truck sales are projected to be 731,400 in the high military spending scenario compared to the baseline scenario. Residential investment is projected to be 3.5 percent lower, which corresponds to 38,500 fewer housing starts and a reduction of 286,500 in the number of existing homes sold.--The Economic Impact of the Iraq War and Higher Military Spending>

One should not be surprised when millions of jobs are lost as GDP declines. Yet, as a result of right wing/militaristic/jingoistic propaganda and FOX, many people still believe that war and military spending creates jobs. That may be true in the short-term. But, in the long run, increases in military spending cause job loss.

the policy would likely lead to a rise in interest rates and inflation, as higher levels of demand begin to push against the economy’s capacity. The rise in interest rates will lead to less investment, and less demand for cars and houses.
Higher interest rates will also push up the value of the dollar. This will increase demand for imports, since foreign-made goods will be cheaper for consumers in the United States, and decrease demand for exports, since U.S.-made goods will be more expensive for people living in other countries. The result will be that the United States will run a larger current account deficit. Over time, this will lead to a larger foreign debt.--The Economic Impact of the Iraq War and Higher Military Spending>

As I have maintained for years --military spending is a waste. Millions spent building a tank, for example, is money sucked down a black hole. The rank returns nothing on the investment and will, inevitably, be blown up! We could just throw our dollars upon a heap, set fire to them, and cut out the middle man! Military spending slows economic growth, increases the budget deficit, increases the trade deficit as can be seen, in fact, in US's NEGATIVE Current Account Balance, formerly called the 'balance of trade deficit'.

Why Democrats Must Change or Perish 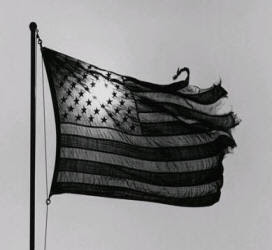 The GOP is a disciplined monolith. Even when the GOP screws up and runs an idiot like George W. Bush or John McCain, there is the danger that he will win because, on election day, the GOP will close ranks, hold their noses and vote the party line. Liberal Democrats for whom Clinton or Obama are too conservative will pout and stay home. Worse --conservative Democrats will join the evil minions and vote for a Bush Jr or a John McCain. The Democratic party, meanwhile, doesn't have the luxury of settling for a 'base hit' in a game in which there are only home runs. For the Democrats, that is! The GOP has the luxury of just putting a man on base! Democrats don't have the luxury of nominating anything less than a JFK or an FDR. The left wing world wide is a disorganized amalgam of differing opinions, sitting ducks for a disciplined, Nazi-like top down party like the GOP where issues are not derived from the people but from focus groups, consultants and think tanks who literally manufacture issues based upon how well they 'test'. What really hurts is that for their talk about 'the base', the GOP owes its allegiance to the richest one percent of the US population, a moneyed segment that plays and wins because it writes the rules.

Voting green ...is a luxury of the middle class, who will more or less fare equally well materially under either major party. Yes, there are social issues, but keep in mind that Bush was chosen as the GOP's dream candidate in part because is soft on abortion. Middle-class women are the key swing voters in this election, an there are a lot of pro-choice soccer moms who lean Republican.

The most active segment of the GOP base is pro-life, but the majority of people in this country are not and the Republican thinkers and money men know it. Bush is not a 'stealth' candidate; he comes from Eastern moneyed Republicans; his dad despised the Christian GOP activists (and the feeling was mutual). Gore knows this, which is why he feels the need to protest (too much) that Bush really is pro-life ---it's been the Democrat's hole-card for so long he can't bear to feel the tactical advantage slowly slipping away from him. --Nate Blakeslee, Texas Observer, Nov 3, 2000

There are two options left to Democrats. The current system sucks! The GOP has the money to endure and rebound. Democrats, always scrambling for money, are a party of speedy sprinters in a long distance race. Democrats may change but risk becoming GOP-lite. They have little choice, then, but to change the rules, but how?