The origin of the title of Aldous Huxley's Brave New World is found in Shakespeare's "The Tempest", specifically Miranda's speech, Act V, Scene I:


O wonder!
How many goodly creatures are there here!
How beauteous mankind is! O brave new world,
That has such people in't.

Shakespeare's Miranda (The Tempest) had grown up on an isolated island. She had known only her father, servants, spirits and an "enslaved savage". There was one notable exception: Ariel, "...a spirit of the air", who had refused to serve the witch, Sycorax. As a result, Ariel was imprisoned in a tree until rescued by Prospero.

Early on, Ariel reveals a plot to murder Prospero. Ariel's obedience is an important symbol of Prospero's humanity, ameliorating Prospero and humanizing actions taken by Prospero against his enemies. 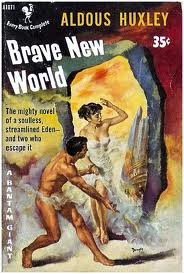 Upon seeing other people at last, Miranda is understandably overcome. She utters the famous line: "O brave new world, That has such people in't." It is irony if not sarcasm. What she has witnessed is not civil behavior but that of drunken louts. Huxley employs the same device when the "savage" John witnesses a a "brave new world". Huxley's work --Brave New World --dates to 1931 when he was living in Italy. Already established as a writer and social satirist, Huxley was by this time a regular contributor to Vanity Fair and Vogue. "Brave New World" was Huxley's fifth novel and his first "dystopian work". Huxley was always eager to credit utopian works by various authors to include H.G. Wells, notably his A Modern Utopia (1905) and Men Like Gods of 1923. It was Wells' "hopeful vision of the future" that inspired Huxley to write a parody. This "parody" became Brave New World. Huxley's vision of the future, however, was quite unlike his original inspirations. Huxley served up what some critics have called a "frightening vision of the future". Huxley himself called it a "negative utopia", a "dystopia". He was clearly inspired by by Wells' own The Sleeper Awakes -ahead of its time with respect to corporate imposed tyranny and "behavioral conditioning".


In 1999, the Modern Library ranked Brave New World fifth on its list of the 100 best English-language novels of the 20th century.[1] In 2003, Robert McCrum writing for The Observer listed Brave New World number 53 in "the top 100 greatest novels of all time",[2] and the novel was listed at number 87 on the BBC's survey The Big Read.[3]


Brave New World
Posted by Unknown at 6:31 AM 3 comments: