I grew up among people obsessed with “demons”; the scariest “demon” of all was the “Red Menace”. We were kept in a state of fear –fear of commies (found under beds or outhouses apparently), fear of “labor” (strikers were called unpatriotic) and the most lethal smear of all: LIBERAL.

I looked it up. “Liberal” means “free”. I dared to asked teachers: “What's wrong with being free?” I never got an intelligent or satisfying response, at least one that could be heard among the gasps. If I ever got a direct response, I was told that a nation's government should not be involved in the "re-distribution of wealth". The "re-distribution of wealth", I was told, was "communism" and Karl Marx its biggest and scariest advocate. 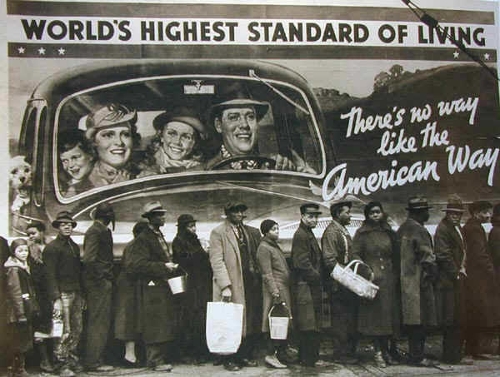 If Karl Marx had been a communist, so what? So-called "capitalists" are experts at "wealth distribution". They have succeeded in looting the nation for the benefit of just one percent of the total population. What is that if not a re-distribution of wealth, the charge most often used by "conservatives" to tar "liberals"?

At the same time productivity declined precipitously under GOP regimes. As a result, the US is on bottom with the world's largest negative Current Account Balance. The Current Account Balance was previously referred to as the balance of trade deficit, a term apparently abandoned amid hopes that the "deficit" might be corrected. To my knowledge, it never was. I suppose “Current Account Balance” just looks better. “Deficit” was made a “bad” word by "conservatives" who had hoped to "position" the left, to label them and hence prevent a productive debate or --better for the conservatives --end all debate whatsoever before it could begin.

America's “financial relationship” with respect to the rest of the world must be taken into account if U.S. imperialism is to be explained. There is evidence to support the thesis that Rome's long-lived experiment with conquest and imperialism was due to its economics. The most obvious clue is the literal auction of the empire by the Praetorian Guard to one Didius Julianus, a nobleman. Julianus would not live long enough to regret his purchase. He was murdered by the Guard and the empire re-seized! Today, that is called "armed robbery".

In our time "capitalism" has often been rammed down our throats. That is especially true in the U.S. Little better, it is sold to us by capitalist blowhards with slogans, claptrap, lies and propaganda. They have done so with “moneys” that might otherwise have “trickled down”. But for GOP tax cuts it did not! Wink and nod! Even worse, we –the people –have financed our own indoctrination.