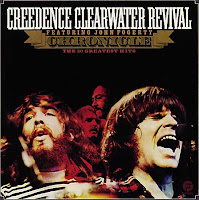 Said to have been written in about 20 minutes, John Fogerty 's 'Fortunate Son' is most often described as "anti-establishment". It was and remains a celebration of 'blue collar pride', a musical 'flip-off' of ruling elites, the sole beneficiaries of the Viet Nam war. These 'ruling elites' are correctly identified with the Washington 'establishment' --an entrenched axis of K-street and the 'Military-Industrial Complex'!

Recall a time when Richard Nixon was President! Essential CCR personnel --John Fogerty and Doug Clifford --were drafted in 1966 but discharged in 1967. Fogerty was no fan of Nixon; he believed that Nixon's cronies received preferential treatment. He was most surely correct!

As more recent events have proven, the song was prescient; the words 'fortunate son' seem now to describe a President who was, in fact, the son of a former President, a former President who had been head of the CIA --George H.W. Bush! His 'fortunate son' would himself become President as a result of a questionable, if not crooked, SCOTUS decision following what was most surely a stolen election in Florida. It is a 'fortunate son', indeed, who rises to the nation's top office at the end of a suspicious vote recount leading to an equally crooked decision of the Supreme Court, a decision that is remembered as much for the meaningless verbal circumlocutions of one A. Scalia as it is for some eight years each of which may be described as 'annus horribillis'!

The song by CCR was, in fact, supportive of soldiers in the field but forcibly makes the point that those serving in Viet Nam did so because they were the sons of working class people --not Senators. They were the sons of ordinary Americans --not well-connected right wing politicians or justices of a court that is now forever tainted!

Credence performed 'Fortunate Son' on the Ed Sullivan Show. Back in the sixties, the producers of the Ed Sullivan show had not yet figured out that CCR's song was a pointed damnation of an unfair war in Viet Nam! Had they figured that out in advance, CCR might never have gotten the exposure.

Just as Bruce Springsteen's "Born In The U.S.A." is a pointed protest, so too is 'Fortunate Son' though many have thought both to be 'patriotic anthems! The opposite is true! Consider the lines: "And when the band plays "Hail to the Chief" Ooh, they're pointin' the cannon at you...!"

Fogerty is often asked what inspired him to write 'Fortunate Son'! His response:

"Julie Nixon was hanging around with David Eisenhower, and you just had the feeling that none of these people were going to be involved with the war. In 1969, the majority of the country thought morale was great among the troops, and like eighty percent of them were in favor of the war. But to some of us who were watching closely, we just knew we were headed for trouble.