How America Lost its Soul 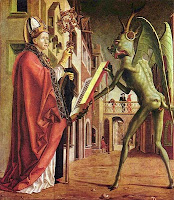 Literature is characterized by recurring themes. On a short list of archetypal stories is the 'pact' which some are said to have entered into with 'Satan'. In many variations, a protagonist agrees to exchange his soul for worldly or temporary gain. As a 'cultural motif', it is most often associated with or exemplified by the German legend of Faust or Mephistopheles.

It is significant that Faust or Faustus means 'lucky' --or 'auspicious' in the original Latin. It is, I'm sure, merely coincidental that Larry Silverstein who is the most obvious, the most notable beneficiary of 911, is called 'Lucky' Larry! In Latin --Faust!

In Goethe's retelling of this archetypal legend, Faust is unhappy, unsatisfied though he is a highly successful scholar. Mephistopheles makes him a 'bargain' that he cannot refuse. Faust agrees to exchange his soul for 'unlimited knowledge' and worldly pleasures. This motif is archetypal and not unique to Western or Christian traditions. It is found, I am told, in almost all cultures throughout history.

To be expected, the western versions of this legend are heavily influenced by traditional Christian beliefs in witchcraft. The pact is between a person and Satan or any other demon; the person offers his or her soul in exchange for diabolical favors, most often material, monetary or sexual but may include youth, knowledge, wealth, or power in various forms and proportions. It was also believed that some persons entered into such a pact in exchange for nothing; it was a sign of recognizing the devil (Satan) as master.

"I told the invited scientists who the Committee was, the Interim Committee, what it was established for, and then I switched over and told them what we wanted of them, the invited scientists; first, to congratulate and thank them for what they have done and then to get them started in talking and questioning. It was a little slow sledding at first but I think I got some wrinkles out of their heads in regard to my own attitude and that of the Army towards this new project. I told them that we did not regard it as a new weapon merely but as a revolutionary change in the relations of man to the universe and that we wanted to take advantage of this; that the project might even mean the doom of civilization or it might mean the perfection of civilization; that it might be a Frankenstein which would eat us up or it might be a project 'by which the peace of the world would be helped in becoming secure'. Well after a while the talk went pretty well. I had Marshall in and during a time when I had to be absent to go over to the White House he took a vigorous hand in the discussion and I think impressed himself very much upon them. I think we made an impression upon the scientists that we were looking at this like statesmen and not like merely soldiers anxious to win the war at any cost. On the other hand, they were a fine lot of men as can be seen from their records. Dr. Fermi, Dr. Lawrence, and Dr. Compton were all Nobel prize winners; and Dr. Oppenheimer, though not a Nobel prize winner, was really one of the best of the lot." --HIROSHIMA: HENRY STIMSON'S DIARY AND PAPERS: Part 5, May 31, 1945 - June 6, 1945

The development of nuclear weapons is often said to be 'Faustian'. Indeed, for a few post war years, the United States, as the sole possessor of atomic power, ruled the world. Even before the bomb was dropped there were doubts about the wisdom of unleashing the atomic genie. It was Physicist Robert Oppenheimer, supervising the U.S. 'Manhattan Project' who quoted the Bhagavad-Gita:

Another version differs only slightly:

If the radiance of a thousand suns
Were to burst at once into the sky
That would be like the splendor of the Mighty one...
I am become Death,
The shatterer of Worlds.

Forbidden Planet of 1956 is a classic Sci-Fi tour de force staring Leslie Nielson, Walter Pidgeon, and Anne Francis. It holds up surprisingly well against Star Wars of the 1970's and even the most recent digital entries.

The story of Dr. Morbius, re-discovering the technological marvels of a lost race of Krell on the distant planet Altair, is updated Shakespeare: The Tempest. And while Forbidden Planet excels in special effects, it's enduring fascination is found in a parable: technology vs its inventor, the monster vs Dr. Frankenstein, in fact any one at war with the enemy of his/her own making.

Forbidden Planet lays bare the dark side of human kind, a forbidding gestalt of uncontrollable urges, the monster from the ID! Just as Lord of the Rings depicts the absolute corruption of absolute power, Forbidden Planet confronts us with a question we would rather not answer: what are we to do with the physical manifestations of our inmost monsters?

Is "Terrorism" the Monster From the ID?

FBI statistics published by the Brookings Institution repudiate the political exploitation of terror by the recent Bush administration, the right wing in general. The FBI's own statistics indicate that while Ronald Reagan most vociferously waged his famous "War on Terrorism", terrorist attacks against the United States actually increased. There were three times as many terrorist attacks during the Reagan years as were the case under Clinton. Yet --Clinton was criticized for not having waged such a 'war on terrorism'. Either the American right wing has not bothered to check the numbers or it has checked them and lies about them. In retrospect, only the wealthy, elite right wing constituency has ever benefited in any way by various 'wars' on terrorism. The rest of us are cannon fodder. The right wing consisting of powerful lobbies and military contractors has made a Faustian bargain. The U.S. is akin to Morbius of Forbidden Planet --too late do we recognize that the only demons that howl are of our own making.

In the United States, if not everywhere, it is the ruling elite that, like Faust, made the bargain. Scrooge was wrong and so is the contemporary right wing. Scrooge was wrong because the terms 'rich' and 'poor' are subjective and often the 'poor class' is the result of elitist greed. The 'monster' that is thus created is not merely the statistical imbalance between right and poor but the insidious economic inefficiencies that result. For example, in the U.S. just one percent of the population owns more than some 95 percent of the rest of the population combined. A inequitable society is an inefficient society. The U.S., for example, seems always to plunge into recession/depression during GOP regimes in which it is also true that the very, very rich have gotten even richer.

By way of influence, lobbies and campaign contributions, et al, the U.S. elite controls the apparatus of government. Naturally, this 'ruling elite' favors economic policies which enrich them to the detriment and/or impoverishment of everyone else. This is the reductio ad absurdum of the Scrooge (Herbert Spencer) position which maintains, wrongly and fallaciously, that the rich are rich because they are smarter and better.
Robert Oppenheimer on the Manhattan Project
Posted by Unknown at 11:07 AM 7 comments: