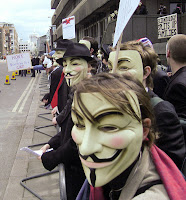 I have been urging a 'peaceful revolution' for some 20 years now! I might have been wasting my breath and keyboard! The time for that has come and gone!

In America, too many progressives seemed content to post ugly caricatures of Bush Jr or the usual and almost always correct assessment of his utterly failed regime. Anyone would have been better, we supposed!

It was too easily forgotten that in the United States there is no 'left wing' with which to mount an effective opposition --let alone revolution. Campaigns are incredibly expensive to 'run' and even more so to 'win'! Only the increasingly concentrated, corporate media benefits. In a nation in which right wing policies --most notably those of Ronald Reagan --have resulted in the enrichment of an increasingly tiny elite, the tiny elite tolerates elections to maintain the appearance of 'Democracy'. I will not bother to post the actual 'Gini Indices' that prove that point --a point that should already have been made, documented, and known by all. In short, American wealth is increasingly concentrated in fewer hands with the rise of the GOP. It is not a coincidence --it's policy! Reagan's 'tax cut' and subsequent GOP largesse was and remains a payoff to the base.

But what is to be done about it? Forget about waging revolution in the conventional sense. The only hope left Democrats is a peaceful revolution waged first from within the party. It must be recalled that Hitler's 'Beer Hall Putsch' succeeded in getting Adolph arrested and thrown in jail. It is tragic that he learned from his mistake and eventually won the leadership of what was, at the time, a 'socialist workers' party. It would not remain so long. A. Hitler --like so many American politicians --pulled a 'bait and switch' on the German people.

The Democratic party is reduced to 'sloppy seconds'; they are but a hedged bet for those who buy and finance not just individual politicians but the process itself. We are property! Realistically --how 'radical', how 'progressive', how innovative can a Democratic candidate be when his/her entire campaign is financed by the same folk who brought you Ronald Reagan, George H.W. Bush, George W. Bush --the three worst 'presidents' in U.S. history --the 'three horsemen of the political apocalypse'?

Progressives were content to sit on their asses and bitch about the choices in the general election! In many ways, the general election is the least important aspect of a political campaign. Policy and issues have been long decided. Is it no wonder, then, that elections are increasingly boring. Nothing new is ever said. Indeed, progressive issues are always the target of the right wing, prominently --Social Security.

To combat socialism Bismarck put through between 1883 and 1889 a program for social security far beyond anything known in other countries. It included compulsory insurance for workers against old age, sickness, accident and incapacity, and though organized by the State it was financed by employers and employees. It cannot be said that it stopped the rise of the Social Democrats or the trade unions, but it did have a profound influence on the working class in that it gradually made them value security over political freedom and caused them to see in the State, however conservative, a benefactor and a protector. Hitler, as we shall see, took full advantage of this state of mind. In this, as in other matters, he learned much from Bismarck. ”I studied Bismarck’s socialist legislation,” Hitler remarks in Mein Kampf (p. 155), ”in its intention, struggle and success.”--Adolph Hitler, Mein Kampf, as quoted by William Shirrer, The Rise and Fall of the Third Reich, p 87.

Nazis were attacking 'Social Security' even in the 'Third Reich' and, given a chance, the GOP will attack and finish it off in a 'Fourth Reich' of their creation. As far as 'Social Security' is concerned it is --arguably --the government's ONLY success story, contrary to the following 'specimen' of the kind of fallacious and idiotic thinking that is destroying our nation before our eyes:

Regardless of what you personally think, Social Security is completely illegal and unCONstitutional, if you believe that the CONstitution is legally binding on anybody. I, on the other hand, take Spooner's attitude that it is NOT, and that therefore, the criminal syndicate referred to by dolts as the "federal government" has no legal authority at all. --An idiot

If Social Security were illegal (it is not) it ought NOT to be! Without it, any one of a number of GOP recession/depressions would have decimated millions of productive Americans whose 'work' made the nation strong. For the same reason, the ruling elites of the right wing will cut off their own noses but --sadly --not until they have relegated the rest of us to misery in the land of the worthless dollar! Alas! Comments like the excerpted one above tend to confirm many in the growing belief that we will have deserved our fate.

It is often said that there are no differences between the parties --a simplistic excuse for not getting involved at the local level during the primaries. If there are few differences between the major parties, then millions have been disenfranchised, left with no one to vote for. Any large block reduced to voting 'against' a major candidate has already lost, before the elections, the opportunity to vote 'FOR' a candidate.

The oft repeated excuse is: '...but there are no differences between the candidates'! There never will be if most of the population 'sits out' the primary process. There are, in fact, real differences between Democratic and Republicans not the least of which is the fact that every Democratic President at least since World War II has significantly better GDP and job creation records than any Republican president. There are other less significant differences but real nonetheless. But few people know this and, Democrats seem too timid to mention it during campaigns. Democrats should be beating the fricking GOP over its collective head with the truth!

In summary, the GOP dictates the agenda because it is owned by the ruling elite and, as a result, GOP policies are designed to enrich this elite. As long as the money drives campaigns, the differences between the parties will continue to blur and/or diminish. At present, Democrats get monies from the same people who finance the GOP. The Democratic party is reduced to a 'hedged bet'. The elites have the money, finance the elections. Democrats cannot afford to be truly independent. It's all a self-fulfilling prophecy, an echo chamber in which real people are simply drowned out. If you don't think so, just try getting 'equal time' to counter the bullshit that is spewed by Fox, Limbaugh, Beck, Billo and the boys!

Real reforms that could change things would be opposed by the big corporations. Naturally --when corporations via K-Street dictate policy, nothing will change. The power is entrenched. A real revolution would mandate mass bustups of the entrenched powers --corporations, the corporate kingmakers who 'select' the candidates they like with a check!

By the time, the 'general election' rolls around, the slate is reduced to Frick or Frack, Dumb or Dumber! There are no viable third choices! Nevertheless --not voting concedes the nation to the GOP. That is not an option. The better option --the third option --does not exist: a viable, grassroots, active 'progressive party' (if that is the preferred label these days)!

Even Hitler did not start from scratch; he and his goons got involved and took over an existing party, rebuilt it in their image, organized at the local level and eventually became a force to be reckoned with. Read Shirer's 'The Rise and Fall of the Third Reich'. Read any history of any revolution. Revolutions are not waged nor won by sitting on one's ass watching CNN and bitching about things. Do you think Hitler invented the Nazi party? No --he did not! But neither was he sitting at home --swilling a lager --while listening to 'primary' returns on the radio!

Many people claim to have options, choices, privileges, luxuries that they don't have, perhaps never had! But sitting out the primaries is not one of them if you wish to make a difference. Hitler did not invent the NAZI party; he took it over. With it, he built up a base of support that Hindenburg had to deal with and eventually make concessions to.

Anyone not willing to get involved in local conventions might as well stay home, swill a beer and watch the returns! But don't bother! Because millions think as you do, the end result has all been worked out on K-Street! One of only two viable candidates will win having been financed by the very same big money that bankrolls both major candidates. Interestingly, less money is given to the Dems! The Democrats have been reduced to supporting an illusion of Democracy.

Bringing Progressive Politics Back To The People