Why the 911 Truth Movement 'Cannot be Stopped' 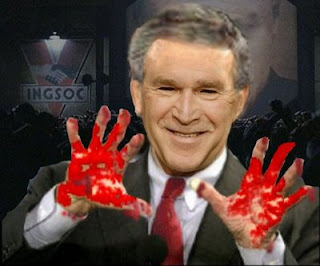 There remains probable cause to indict and charge top officials, George W. Bush himself, for the crimes we call '911'. And, last time I checked, there was no 'statute of limitation' on mass murder, war crimes [see: US Codes, Title 18, Section 2441] or high treason!

The evidence against Bush, Cheney and a gang of NEOCON crooks will prove in court that Bushco conspired to attack and invade Iraq for its oil! It will not help the defense that documents of Cheney's meeting of his 'Energy Task Force' survive and prove that the Cheney and 'big oil' literally carved up the oil fields of Iraq before Bush would have the pretext he needed to attack, invade, and loot oil!

Earlier this year a BBC Newsnight report claimed to have uncovered documents showing the Bush administration made plans to secure Iraqi oil even before the 9/11 terrorist attacks on the US. Based on its analysis of PSAs in seven countries, it said multinationals would seek rates of return on their investment from 42 to 162 per cent, far in excess of typical 12 per cent rates.

As Hitler needed a Reichstag Fire, Bushco needed a pretext --a 'catalyzing event' that the Project for the New American Century would compare to Pearl Harbor. [See Rebuilding America's Defenses; toward the end of this PDF document you will find a picutre of the US Global Hawk which, I believe was 'the missile', as Rumsfeld called it, that hit 'this building' as Rumsfeld referred to the Pentagon!]

Bush conspired with 'rich men' --his elite base --in order to perpetrate the capital crimes of aggressive war, mass murder and high treason!

On this eighth anniversary of the tragic events of 9/11. the movement of concerned citizens who do not believe the U.S. government’s official explanation of those events (the clear majority in poll after poll after poll) only continues to grow, emboldened by breathrough after breakthrough in their efforts to bring the glaring inaccuracies of that official explanation to the attention of the general public.Perhaps no greater sign of the success of the 9/11 Truth movement can be found than the fact that the discredited corporate media has begun another round of ferocious and transparent hit pieces designed to sling mud at those seeking real answers to the still-unanswered questions of the victims’ family members and real justice for the first responders who are dying as a direct result of government lies. From Psychology Todays ridiculous hit piece insisting that skepticism about government explanations is a form of insanity to National Geographic firing explosives into a fiberglass chicken coop, it seems that the corporate media is becoming more and more desperate (and even downright comical) in their attempts to stop people from questioning the very 9/11 commission that has been called a fraud by six of its own commissioners.

Most of these attacks on 9/11 end up focusing not on the evidence itself, but on one inevitable question: “Why do ‘conspiracy theorists’ believe what they believe?” Of course, this question is coming from the self-same media conglomerates who speak in unanimity against 9/11 Truth and then wonder why newspapers are going the way of the dodo and people are turning off the TV in droves, so we can assume the question is either disingenous or that the corporate media bigwigs are, shall we say, intellectually challenged.

The biggest hole in the official theories is the fact that there is absolutely no forensic evidence supporting the Bush conspiracy theory. Certainly --no airliner wreckage was recovered in New York and the surviving steel was ordered destroyed by Bush but not before traces of thermate were recovered and subsequently tested, analyzed and confirmed. The presence of thermate is very nearly the smoking gun. Without thermate, the steel girders of WTC would never have weakened, collapsed or melted as they were, in fact, photographed. 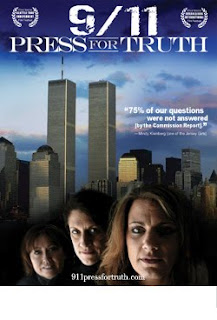 WTC 7 is another fatal flaw, a nail in the Bushco coffin. WTC 7 was not struck by any airliner of any size. It was seen standing behind a BBC correspondent even as she reported its collapse. Clearly --she had gotten the official 'release' but screwed up by reporting this planned event before it, in fact, occurred. The fall of WTC 7, never struck by airliners, is a classic example of a controlled demolition.

At the Pentagon, only one engine rotor was found --not the two that would have survived to be recovered had an airliner struck the Pentagon. Moreover, the only rotor found was about one third the size of two rotors that would have been recovered had a 757 struck the Pentagon. There was no fuselage, no airliner wreckage! Unless the laws of the conservation of matter and energy have been repealed, a 757 weighing some 80 tons or more would have left behind just that much debris. Certainly, the small of amount of debris might have been carried off in wheelbarrows.

Desperate 'officialists' concede that no airliner fuselage was found. It 'vaporized', they 'explain'. Nonsense! The fuselage is of aluminum and according to every scientific, official or university source I have found, aluminum will not 'vaporize' at temperatures less than 11000 degrees F. According to NASA, 11000 degrees F is 1000 degrees hotter than the surface of the sun. So --you can rule that out!

Officialists also claim that DNA testing confirmed both passenger and 'hijacker' IDs. There are at least two things wrong with that assertion: 1) there are NO Arab names on the official autopsy report released to Dr. Olmsted in response to his FOIA; 2) if the fuselage vaporized as is claimed, then no DNA IDs would have been possible. DNA is often said to decompose when heated but, in fact, the effect is even worse: it literally melts. As heat is applied, bonds that join the two nucleotide strands may break.

The two molecules [nucleotides] are stabilized in this structure due to noncovalent bonds, mostly hydrogen bonds and vanderWaals forces. These bonds are not strong; accordingly, when the temperature rises sufficiently, the double helix is said to "melt" into its two component molecules, and will reassociate upon slow cooling under appropriate salt conditions. So, the issue is not decomposition so much as disassociation upon exposure to too high a temperature; and the reason for the disassociation is that the energy input of the heat overcomes the ability of the noncovalent bonds to keep the molecules together.

At the 11000 degrees F required to 'vaporize' the fuselage, I dare say no DNA would have survived, no DNA ids would have been possible at all. So --which is it? Did the fuselage vaporize or not? Were the DNA ids performed or not? The officialists simply cannot have it both ways.

The truth, however, explains everything. Lies explain nothing. The truth is: no airliner struck the Pentagon. The only 'official autopsy report' known to exist was released to Dr. Olmsted via his FOIA request. There were NO ARABS on the list!

Take the case of Flight 93. Saeed Alghamdi has been protesting his innocence of 911 since the event. If Saeed were guilty, he would be dead! If Saeed were guilty he would have been blown to smithereens over PA. A dead Saeed might be evidence of Bush's theory. Alive, he is living proof that Bush's official conspiracy theory is a pack of black hearted lies that have harmed the American people, the world and, most certainly, the cause of peace. Bush is the primary suspect for several reasons:Tim Roemer let the cat out of the bag when, like Donald Rumsfeld, he referred to a 'missile' that struck the Pentagon. And that, I believe, is the truth that Bush would cover up and lie about.

If Bush had been innocent of the crime, he would have ordered every scrap to be placed in evidence. Instead, he obstructed justice by ordering destroyed the evidence of mass murder an high treason. If Bush had been innocent, why would he have ordered the destruction of evidence that might have proved his innocence in court? Within months of WTC collapse, tons of metal from the collapsed towers were sold to scrap yards in New Jersey where it was then sold to recyclers in the US and overseas. As the recent discovery of thermate proves, every shred, every scrap of 911 metal was evidence which, if examined, might have explained the collapse or pointed an accusing, indicting finger! Perhaps it is that last fact that explains the haste with which this 'evidence' was destroyed.

If Bush were innocent, then why would he have ordered the destruction of evidence that might have exonerated him? The only answer is that Bush is not innocent and ordered the destruction of evidence that would, in fact, prove his guilt of the crimes of mass murder and high treason against the sovereign people of the United States, the Constitution, US Criminal Codes and every moral code known to mankind since leaving the caves and savannahs.

Let's get on with the trials. Let's bring the guilty bastards to justice! There is no future until the demons of the past are dealt with, resolved and put to rest. No future is promising that is built upon a foundation of lies, high treason and the mass murder of US citizens by its own government.

[US officials, Congressmen, State and Defense Dept. officials Bribed for Nuclear Secrets! Can you say wide spread high treason in the US Government? ]

We'll pick this up tomorrow after I get a look at it. You East Coasters will likely beat me to it. But here's the teaser from TAC...:

There’s a new issue of The American Conservative going to press today, and it includes a story that will make more than a few congressmen and foreign lobbyists intensely uncomfortable: an in-depth interview between Phil Giraldi and FBI whistleblower Sibel Edmonds. She tells us exactly how Turkish intelligence have penetrated national secrets, suborned government officials, and blackmailed Congress. It’s going to be explosive.

Good. Rightwingers are covering it. So hopefully that means the "liberal media" will now pay attention!

UPDATE 9/18/09 1:15pm PT: Sibel posted the cover over at her site, and I've added it above. She also notes that the story is currently online available online to subscribers only until Monday when they'll release "a major press release" along with the print version out the same day. The story should then be available to all online on Tuesday.

The cover title: "Whose Afraid of Sibel Edmonds?: The gagged FBI whistleblower on espionage, al-Qaeda, and secrets for sale"

In an email she just sent me just now, she notes: "We've been getting foreign
MSM inquiries; tons. Zilch here; so far..."

Not much of a surprise by now. After all, what U.S. media would possibly care about members of the U.S. Congress and high-ranking State and Defense Dept. officials taking bribes, being blackmailed, and enabling the theft and sale of U.S. nuclear secrets? Even if the allegations came under sworn and video-taped deposition by a former FBI translator who overheard such things first hand. Non-story, apparently.