I did not support Obama so that the US could continue Bush's criminal policies! I most certainly did not and do not support the commission of new war crimes, aggression, or atrocities!


US President Barack Obama personally issued the order for US air strikes in Yemen last Thursday which killed scores of civilians, including women and children.

US warplanes used cruise missiles against alleged Al Qaeda camps in the Abyan village of al Maajala, some 480 kilometers southeast of the capital Sana’a, and in the Arhab district, 60 kilometers to the northeast of Sana’a. The US strikes were apparently coordinated with the US-backed dictatorship of Yemen President Ali Abdallah Saleh, whose military forces attacked the bombed towns as well as a third village, resulting in the deaths of some 120 people, according to Yemen opposition spokesmen.

Local officials and witnesses in the area of Mahsad, the site of the heaviest US bombardment, put the number of those killed at more than 60 and said the dead were mostly civilians. They denied that the target was an al Qaeda stronghold.

--Obama ordered US air strikes on Yemen By Barry Grey

When one's own country is wrong, it is one's patriotic duty to protest. I had hoped Obama would not become the new LBJ --stuck with and blamed for GOP wars of aggression accompanied by heinous war crimes by the US military and the world's largest and best financed terrorist organization --THE CIA! [See: Kangas, A Timeline of CIA Atrocities]


Three of the seven--George Tenet, Porter Goss, and Michael Hayden--were themselves involved, in one way or another, in planning, conducting, or covering up all manner of illegal actions, including torture, assassination, and illegal eavesdropping. In this light, the most transparent part of the letter may be the sentence in which they worry: "There is no reason to expect that the re-opened criminal investigation will remain narrowly focused."

When asked about the letter on the Sunday TV talk shows on Sept. 20, Obama was careful always to respond first by expressing obligatory "respect" for the CIA and its directors. With Bob Schieffer on Face the Nation, though, Obama did allow himself a condescending quip. He commented, "I appreciate the former CIA directors wanting to look out for an institution that they helped to build."

That quip was, sadly, the exception to the rule. While Obama keeps repeating the mantra that "nobody is above the law," there is no real sign that he intends to face down Panetta and the Seven Dwarfs--no sign that anyone has breathed new life into federal prosecutor John Durham, to whom Holder gave the mandate for further "preliminary investigation." What is generally forgotten is that it was former Attorney General Michael Mukasey who picked Durham two years ago to investigate CIA's destruction of 91 tapes of the interrogation of "high-value detainees."

--Are Presidents Afraid of the CIA?

US 'Presidents' have reason to be afraid of the CIA. The last President to threaten the CIA with being smashed 'into a thousand pieces' was JFK. He was murdered in downtown Dallas and a 'lone scapegoat' had been set up to take the fall.


Without a bullet that can be proven to have been at the scene of the crime, the government would have had no case against Lee Harvey Oswald, tried in absentia in the media because he was murdered and murdered before he could talk. Conveniently! The government needed a piece of hard evidence --a magic bullet'!

They got one! Conveniently!

The government needed a truly magical bullet that did magical things --the work of six or seven other bullets most which got beat up and deformed in the line of duty.
Arlen Specter must be credited with concocting the theory that a single 'magical' bullet could smash bone and cartilage and emerge with nary a scratch! Arlen Specter would pull a pull a 'magical theory' out of thin air while a friendly shill would pull an equally 'magic bullet' out of his ass.

--Why Lee Harvey Oswald Had to Die! 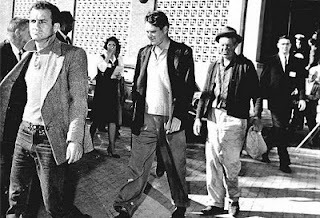 As things 'went down', the government was left with a live patsy against whom it could NOT have made a case. There was a bullet --a 'magic' bullet --that would have been thrown out of court for lacking 'bona fides'. The fall guy had to die!


Like the fatal flaws in the official conspiracy theory of 911, the holes in the government's JFK story are fatal.
I interviewed a witness to the JFK murder many years after the fact. Rosemary Willis was but a child on that fateful day and her story has been ignored by the mainstream media. When we met, she produced several boxes of color slides that had been taken by her father --Phillip Willis --that fateful day in Dealy Plaza.

--Exposing Lies About the FED, the CIA, the Murder of JFK

Over a double-page spread in Look Magazine, a train on the railroad tracks is clearly visible beyond the infamous pergola atop the grassy knoll. But --in the slides that were returned by the FBI, there are no train cars to be seen!

The railroad tracks figure prominently in the assassination. It was amid freight cars on those same tracks that several 'tramps' --dead ringers for Jeb MaGruder, Frank Sturgis and Howard Hunt --had been arrested before the assassination.

And what was it the FBI hoped to conceal? Simply, the tramps had not been tramps at all but assassins having connections to the CIA. The slides slipped through the cracks just long enough to have been published by Look. The 'train' was not intended to be seen. Otherwise, why would the FBI have removed the train from the slides? The FBI would not have bothered to tamper with slides that did not incriminate them in some way. A train and box cars are incriminating if and only if they were of some use to the assassins of JFK.


"I didn't have anything to do with the assassination, didn't know anything about it," he said during one of them. "I did my time for Watergate. I shouldn't have to do additional time and suffer additional losses for something I had nothing to do with."
But now, in August 2003, propped up in his sickbed, paper on his lap, pen in hand and son sitting next to him, he began to write down the names of men who had indeed participated in a plot to kill the president. He had lied during those two federal investigations. He knew something after all. He told St. John about his own involvement, too. It was explosive stuff, with the potential to reconfigure the JFK-assassination-theory landscape. And then he got better and went on to live for four more years.

Those assassins, I believe, were supervised that day by E. Howard Hunt assisted by George H.W. Bush who was photographed hanging around the front entrance of the TSBD, perhaps making sure that his 'men' were in their places, awaiting their cues. 'All the world's a stage'! 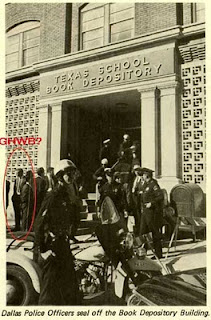 Later this man's near moronic son would preside over traumas perhaps equal to an assassination of a legitimate and duly elected President. Bush Jr would become complict in a stolen US election and the felonious attack upon ballot re-counters in the 'banana republic' of Florida, controlled by yet another Bush, Florida Governor Jeb Bush, who signed Executive Order 01-261 on September 7, 2001 just four days before the WTC tragedy of 911. J. Bush's order paved the way for a declaration of martial law in the state of Florida, delegating to '...the Adjutant General of the state of Florida all necessary authority....to order members of the Florida National Guard into Active Service.'