On the Brink of Collapse, Palin-McCain Indulge Smear Jobs and Distractions 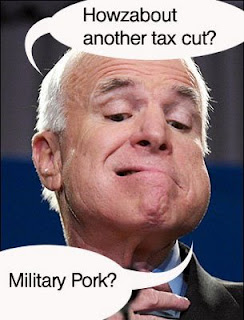 McCain-Palin refuse to talk about the fact that the US and the world face the biggest economic collapse since the GOP brought you the Great Depression. McCain Palin want to talk about someone Obama might have met when he was eight years old!

Palin-McCain want the US to repeat the GOP/ideological strategies that brought us to this point: 1) enriching the tiny elite which alone have benfited from GOP tax cuts, bailouts, and preferential treatments; 2) raising the tax burden on everyone else who must take up the slack. In other words, McCain-Palin want to keep on raping the nation and blaming the victim. It's the GOP way. Rather than rewarding this gang of crooks with an election win, I want to round up the Bush administration and put it on trial at the Hague, charge it with war crimes, crimes against the peace, torture and other violations of Geneva and Nuremberg.

McCain’s course correction reflects a growing case of nerves within his high command as the electoral map has shifted significantly in Obama’s favor in the past two weeks.

“It’s a dangerous road, but we have no choice,” a top McCain strategist told the Daily News. “If we keep talking about the economic crisis, we’re going to lose.”

McCain's attitudes about the corporate takeover of the us government dates to the role his played in the Savings and Loan Scandal of the 80s and 90s when McCain was accused of 'improperly aiding his political patron, Charles Keating' who was chairman of the Lincoln Savings and Loan Association at the time. An investigation by the bipartisan Senate Ethics Committee resulted in McCain getting reprimanded for his role. McCain is, in fact, the only major party Presidential nominee in US history to have been "...rebuked, censured or otherwise admonished after a Congressional investigation." [See: Keating Economics: John McCain and hte Making of a Financial Crisis]Two bailouts in a period of some two weeks or less hasn't worked. Panicked investors withdrew 52 billion from US managed stock and bond funds in a period of a week or less. Investors had already withdrawn $72.3 billion in September --the biggest withdrawal ever in a single month. Years ago, I wrote in 'The Opinion' that GOP strategy was best summed up: just keep on doing whatever makes you sick! Even then, the numbers were unmistakable: every Democratic president since FDR had outperformed every GOP President in every key economic index, notably, job growth and overall GDP. Moreover, Bill Clinton had reversed a trend begun with Reagan's tax cut for the rich. It was Reagan's tax cut that not only triggered a depression of some two years --the worst since the Great Depression --it triggered a trend that is always worse under GOP regimes: the rich get richer and the poor get poorer. This trend abated in Clinton's second term only to resume with Bush and yet another round of GOP largesse to those who don't need it. That was not the only trend reversed by Bill Clinton. The ratio of gross national debt to to GDP was at its lowest level since 1931 when Ronald Reagan took office. Under Reagan, it did not last long. Ronald Reagan ran up historically high debt and deficit --a trend that 'skyrocketed' through twelve years of Reagan/Bush. The official charts from every agency prove conclusively that Bill Ciinton had reversed those pernicious trends as well. Another myth is that Reagan was one of the best Presidents for job creation. In reality, he's among the worst:

Job Growth Per Year Under Most Recent Presidents8

But this week, Larry King let a GOP spinmesiter and paid shill get away with characterizing 'unemployment' under Jimmy Carter as 'immense'. Briefly --that is a BALD FACED LIE and to be expected from the GOP. Check the official numbers above. One should expect a morally bankrupt party like the GOP to attack Carter's record. Carter's record on every issue is far, far superior to the miserable performances turned in by EVERY GOP President since 1900.

The GOP is a party of liars. They will lie to you because they lie to themselves daily. It's the only way they can get through the day. If GOPPERS had ever faced the truth about themselves, they would have shot themselves a long time ago.

It took a return to GOP mismanagement, greed and incompetence to undo the good that had been done in Clinton's eight years in the Oval Office. Now the national debt is the highest it's been since 1955 (53 years ago).

Bush did three things to skyrocket the debt from $5.7 trillion to $10 trillion: 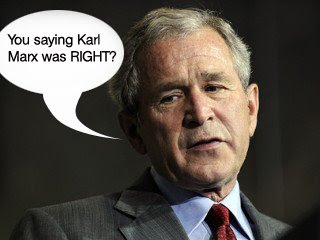 Bush did three things to skyrocket the debt from $5.7 trillion to $10 trillion: As it happens, McCain backed all three policies:

What if you went to a doctor who told you: 'just keep on eating the greasy foods, lazing around the house, hitting the bottle! Don't take any responsibility for your own health; blame it all on your neighbors!

Bill Clinton's was the ONLY successful presidency since Jimmy Carter left the White House. The GOP would like you to just keep on doing whatever it is that's making the nation sick, bankrupt, deteriorating, collapsing. The GOP has nothing new to offer. At the cost of the republic itself, we have learned the hard way that everything the GOP has ever said has been a lie. Nothing has worked! It's all bullshit!

Addendum: it's not bad enough that the GOP has deliberately bankrupted the nation, Bush worked assiduously to assume dictatorial powers as he put into place a huge federal bureacracy whose only raison d'etre is to spy on you, intimidate you and deny you due process of law. There is a word for this: TYRANNY!

Naomi Wolfe on Tyranny and the US Police State

McCain's 'Gaffe' Appeals to Throw-back Base 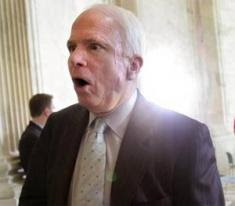 McCain did not 'gaffe' when he denounced an 'over head projector' at the world famous Adler Planetarium. McCain was, rather, sucking up to the GOP base of Palinesque reactionaries and 'anti-science' types.

McCain won't lose a single vote despite the fact that the Adler never got the money that McCain says it got. This is not about projectors or money. It's about the problem McCain has with 'truth'. The item in question is hardly an 'over head' projector.

Last night, during the presidential debate in Nashville, Tennessee, Senator John McCain made the following statement:

McCain: “While we were working to eliminate these pork barrel earmarks he (Senator Obama) voted for nearly $1 billion in pork barrel earmark projects. Including $3 million for an overhead projector at a planetarium in Chicago, Illinois. My friends, do we need to spend that kind of money?” 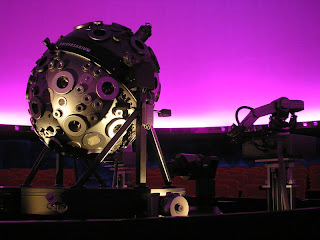 Science literacy is an urgent issue in the United States. To remain competitive and ensure national security, it is vital that we educate and inspire the next generation of explorers to pursue careers in science, technology, engineering and math. Senator McCain’s statements about the Adler Planetarium’s request for federal support do not accurately reflect the museum's legislative history or relationship with Senator Obama.

The Adler has approached the Illinois Congressional delegation the last few years for federal assistance with various initiatives. These have included museum exhibitions, equipment and educational programs we offer to area schools, including the Chicago Public Schools. We have made requests to Senators Durbin and Obama, as well as to 6 area Congressmen from both political parties. We are grateful that all of the Members we have approached, including Senator Obama, have deemed our activities worthy of their support, and have made appropriations requests on our behalf, as they have for many worthy Illinois nonprofit organizations.As a result of the hard work of our bipartisan congressional delegation, the Adler has been fortunate to receive a few federal appropriations the past couple of years. However, the Adler has never received an earmark as a result of Senator Obama's efforts. This is clearly evidenced by recent transparency laws implemented by the Congress, which have resulted in the names of all requesting Members being listed next to every earmark in the reports that accompany appropriations bills.--Adler Planetarium, Statement About Sen John McCain's Comments at the Presidential Debate [links to PDF file]

The miracle is that when all of them get together in what is called the GOP National Convention, they STILL cannot win the White House unless they steal it!
Posted by Unknown at 9:02 AM 2 comments: