Why the GOP Occupied Texas II

Though Texas is now thought of as a 'red' state, it was not always so. From January 15, 1874 to January 16, 1979 every Texas governor was Democratic. Moreover, most of them could be described as 'progressive Democrats'.

This topic has come up as Texas is now thought of as GOP occupied territory, i.e, a 'red' state. If this is, indeed, the case, the GOP had best be kind to Texas. A cursory survey of the red-blue map of the U.S. indicates that Texas is the only state among GOP/red states to have electoral votes in two digits. As a result, Texas may be essential to the GOP which seems hell-bent on self-destruction, courting irrelevance, skirting eventual oblivion. 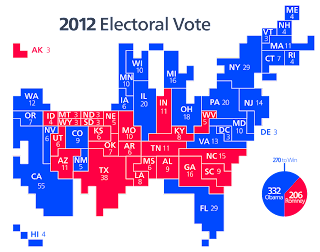 Under the Constitution, the office of President is supposed to represent the 'people'. If that is the case, then WHY are Presidents elected by states and appointed 'electors'? The final 'vote count' is watered down to the extent it may be irrelevant.
There are several remedies but one is most urgent: the abolition of a relic called the Electoral College! What IS it good for? Absolutely NOTHING! (apologies to Edwin Starr)

There are, in fact, various methods by which a popular vote could and would allow the people to elect their representatives directly, thus cutting out the middle man. The office of President is, under the Constitution, responsible directly to the people --not the states. It is, therefore, absurd that the holder of that office be elected by any method other than a direct election of the people to whom the President is ultimately responsible.

That, of course, is why the GOP will oppose this proposal!

The question is: how responsive is the government to the will of the people? It is self-evident that public officials should achieve public office by way of elections that most accurately reflect the will of the people. Otherwise --why have elections? The most egregious outrages against this principle include election thefts as, in fact, happened in Florida. That is, in itself, an outrage. It might have been predicted that the only beneficiary of this outrage --George W. Bush --turned out to have been among the very worst Presidents in U.S. history. That alone is outrageous and even more so as it followed Bush v Gore, the very worst SCOTUS decision in U.S. history.

Questions remain; solutions are scarce. Nevertheless, there must be a better way. The good news is: there is a better way: the President could be elected directly by the people. Party machines capable of 'stealing' elections may be bypassed, made irrelevant. An election can be made scientific, the tabulation of votes made accurate and the casting of votes themselves made more representative of the 'will of the people'.

Why was Texas targeted for occupation by the GOP?

That's easy, covered in 'Election Grabbing 101', first semester! With 38 electoral votes, Texas is, by far the plum in the GOP bag o' dirty tricks. If Texas should turn blue, the GOP is FINISHED. Look at the other 'red' states with electoral votes ranging from 3 to 16. I will put it this way --the GOP needs Texas a hell of a lot more than Texas needs the fucking carpetbaggers of the GOP.

Currently, typically minorities are inadequately represented. That's the point behind direct elections. Cut out the middle man; stop 'watering down' the vote. Prior to re-districting by one Tom DeLay, Texas had not been the solid 'red state' that millions now believe it to be. For a period of some 100 years, for example, EVERY TX governor had been Democratic. Some --like the Furgusons --were VERY PROGRESSIVE. It was a better state for it.

Paul Krugman: Conscience of a Liberal

by Paul Krugman Some readers may have noticed a recent op-ed by King and Soneji alleging that Social Security projections understate life expectancy and are therefore far too optimistic. This claim will, I’m sure, become part of what all the serious people think they know.But the Social Security actuaries have replied (pdf), offering among other things one of the best examples I’ve ever seen of a brutally polite intellectual takedown:

King and Soneji developed their own projection methodology for mortality and made a series of assertions in their op-ed about the methods used by the Office of the Chief Actuary. As with all new entrants into this field of analysis, their work may ultimately provide value in the continuing evolution of our methods. However, the assertions in their op-ed require some response and clarification.

Oh, snap. (Or since we’re talking about social insurance, SNAP).So yes, the Social Security Administration knows about obesity and smoking, and incorporates this into its projections. More broadly, SSA has not failed to anticipate rising life expectancy; on the contrary, it has if anything been slightly over-optimistic.An almost unrelated note: since I am, as you can see, a devotee of adding relevant YouTube videos to blog posts, I was glad to see Jonathan Cohn bring the killer rabbit into the debt ceiling denouement — and especially gratified that I decided not to use the same thing, and went for a poker-playing cat instead. But this then raises the question: what if the Republicans bring out the holy hand grenade? Paul Krugman, NYT
Bill Moyers Interviews Paul Krugman
Posted by Unknown at 6:47 AM No comments: