How the GOP Hijacked Texas

Millions of good people in Texas are just as appalled by the rise of the GOP in that once great state as are Democrats/progressives/liberals in any other part of the country. Epithets targeting Texas are misplaced.

Texas is NOT your enemy.

We have seen the 'enemy' and it's the GOP! The GOP knows full-well what happened in Texas and the role played by George H.W. Bush in bringing it all about. 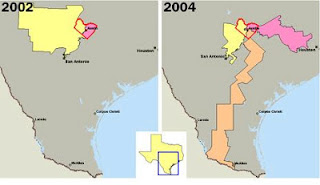 The demonization of Texas plays into GOP hands. It's bunkum.

The conversion to 'red' began with the arrival of the Bush crime and kooky cult clan of crooked, lying Republicans. The way was paved by Tom DeLay who gerrymandered the state creating for the GOP a party machine, a dependable, solid 'base' from which it could spread its crack pot, evil lies and bile.

Republicans say the plan did not dilute minority votes. But a 73-page memo, dated Dec. 12, 2003, was provided to The Washington Post by a person who claims otherwise.


Justice Department lawyers concluded that the landmark Texas congressional redistricting plan spearheaded by Rep. Tom DeLay (R) violated the Voting Rights Act, according to a previously undisclosed memo obtained by The Washington Post. But senior officials overruled them and approved the plan.

Under the Voting Rights Act of 1965, Texas and other states with a history of discriminatory elections are required to submit changes in their voting systems or election maps for approval by the Justice Department's Civil Rights Division.

Posted by Unknown at 5:48 AM No comments: