If 'Corporations' are 'people', then Labor Should Become a 'Person'

If corporations are people so too are UNIONS! But --should UNIONS assert 'personhood', corporations (which don't like unions in ANY case) would scream bloody murder being comprised as they are of liars, psychopaths and hypocrites who cannot be held to their own 'standards'! I have urged unions to INCORPORATE! What's to prevent them from fighting fire with fire? Nothing!!! And in this case SCOTUS would have no choice to but to support them having already said that any corporation that they may form is 'A' person. 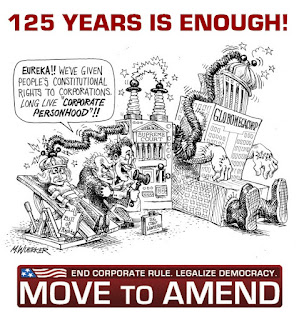 I suggest that ALL OF THE UNIONS form a SUPER SUPER CORPORATION!

It should strike terror into the hearts of the crooks, liars, hypocrites and robber barons which now makes up the so-called 'corporate community' so dear to the hearts of crooked justices like Clarence Thomas.
THE NATION'S LARGEST UNIONS could --in fact --INCORPORATE and, in one stroke, strike fear and trembling into the hearts of so-called 'corporate AmeriKa':
As of 2003 these were all of the unions in the US with over 100,000 members in order from the largest: Add up the membership of all these unions! How much money could be raised with the sale of stock?

I would urge this SUPER UNION, INC to sell stock! Few corporations could be so large so quickly. Should this stock sell publicly, this SUPER-UNION, INC could be a major player literally overnight. With that kind of clout, UNIONS could have their own lobbyists on K-Street!

Congress would --to say the least --pay attention and, one hopes, get a clue! Such a powerful 'corporation' could, at the same time, hire an army of lobbyists to lobby for the REPEAL of 'Citizens-United' which congress could easily do by merely, re-defining the word 'corporation'.