Creationists believe that the age of both Earth and Universe can be derived by adding up the "begats" in the Old Testament. That is the methodology of latter-day creationists who, like Sarah Palin recently, have concluded that the age of the universe is about six-thousand years. 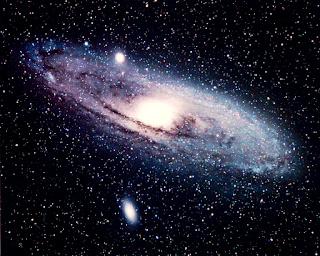 In fact, any number not in the billions is not even close. As science, the creationist ideology is easily disproved. Any geological period older than Sarah Palin's estimate of the Earth's age disproves her.

The verifiable age of fossils proves Palin wrong. I chose, as an example, the Permian era because I have some personal knowledge of that period having grown up in what is called the 'Permian Basin' in West Texas.

As a child of six, I assembled an interesting collection of fossils that I had found on my own explorations of King Mountain, a long plateau in West Texas, near the town of McCamey. Any ONE of those fossils disproves Sarah Palin. All of them date to a period far, far older than a mere 6,000 years.

A plateau [King Mountain] itself was probably underwater at one time. If you can see King Mountain with Google earth, you have proven Palin both wrong and stupid. Fossils found there are dated to the "Permian period" --a geologic period lasting from about 299.0 million to 251.0 million years ago. It is the last period of the Paleozoic Era. Any one of those fossils disproves Palin. Anyone of them is considerably older that Palin's estimate of some 6,000 years --a mere blink of an eye by comparison.


Two hundred and fifty million years ago, ninety percent of marine species disappeared and life on land suffered greatly during the world's largest mass extinction.
The cause of this great dying-off has baffled scientists for decades. Recent speculations invoke asteroid impacts as a kill mechanism. Yet a new study published in the December issue of Geology provides strong indications that the extinction cause did not come from the heavens but from Earth itself.

It comes down to this: if we can look up at the sky at night and see Andromeda "creationists" are wrong! Andromeda --proven to be over 2 million light years distant --is the only galaxy that can be seen with the naked eye. We see Andromeda as it was over 2 million years ago. Seeing it --with or without a telescope --proves that the universe is exponentially older than the mere several thousand years that Palin ascribes to it. If we can see it at all, creationism is wrong.

Creationism is not science. The distance to Andromeda can be determined precisely.


By comparing the absolute and apparent magnitudes, Ribas's team concluded the Andromeda Galaxy is 2.52±0.14 million light-years from Earth. This agrees perfectly with the Cepheid-based distance to Andromeda: 2.5 million light-years. The newly determined distance, however, does not depend on assuming a distance to the Large Magellanic Cloud. The agreement means astronomers can trust Cepheid distances to more distant galaxies, such as those in the Virgo and Fornax clusters.

This alone disproves Palinesque nonsense. We can see Andromeda. We can date the age of rocks as well as the rock of ages.

We can also determine very precisely the distance to stars and galaxies. I found the Andromeda Galaxy as a kid in Odessa, TX. I had nothing more than a good pair of hand-me-down binoculars, a shaky tripod and a star map. It is the only Galaxy visible to the naked eye. Merely seeing it disproves Palin's theory that the earth is but a few thousand years old.

If we had discovered no other object but Andromeda --the only Galaxy visible to the naked eye --we must conclude, therefore, that the universe is very, very old. Most scientists are agreed that the age of the universe is some 13.7 billion years. Palin is utterly refuted by impeccable science conducted by reputable scientists and confirmed countless times in many ways by the world-wide scientific community.