The Empire Falls Back 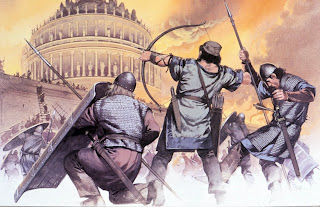 We've grown up with a Christian-Roman version of European and world history, primarily the Fall of Rome. The Romans --we are taught --created a great empire characterized by a sophisticated system of arrow-straight roads that made possible commerce and travel from the far flung reaches of empire from Briton to Constantinople, from Carthage to Germania.

Just outside the borders of empire, we are taught, lived uncivilized, untutored barbarian hordes intent upon harassing, plundering, threatening the Pax Romana that defined the Greatest Empire the world had ever seen. The term Pax Romana always rang false with me. Was it ever at peace but, rather, an Orwellian perpetual war, the 'corporatized' taking of human life required to keep the Leviathan afloat? Much speculation about the fall of Rome is false. Fundamentalist Christians in America believe Rome fell because it indulged orgies, homosexuality and the feeding of Christians to lions. The more informed may cite Gibbon and sum up the fall of Rome in a phrase: loss of civic virtue. While no one pretends that Rome was in all ways and all times virtuous, the 'loss of civic virtue' applies as well to fiscal profligacy, arrogance and, perhaps most importantly, the consequences of conquest. Conquest is thought necessary by nation-states like Rome, forgetting that an imperially ambitious nation substitutes conquest for real productivity. Instead of employing persons, Rome seized their farms and sent them off on wars of aggression and conquest. Obvious examples are Dacia and Gaul both of which Rome invaded for 'gold'. More recently, George W. Bush attacked and invaded Iraq for its oil. Little has changed but names and commodities. If you are still inclined to believe the Bushco cover story, please tell me how many bona fide terrorists were captured by Bush and cite a scintilla of evidence that they were anything but Iraqis defending their nation, their homes and families, against an aggressor, a thief, a war criminal. If the Bushco case against 'detainees' at Guantanamo and elsewhere were sound, then why did Bushco so adamantly deny them 'due process' or protections afforded them under the principles of the Geneva Convention? What had Bush to hide but war crimes and atrocities?

More than ever, I remain unimpressed with the assertion that the attack and invasion of Iraq had anything whatsoever to do with the faux 'war on terrorism'! Without an 'imminent threat', the U.S. attack and invasion of both Afghanistan and Iraq are war crimes as are illegal detentions, torture, murder and other atrocities.
There is no evidence whatsoever that Iraq had anything to do with 911. Someone in the Bush administration had a bright idea: "let's call the opposition to U.S. aggression and conquest by the name 'Insurgent'!" I would not be surprised to learn that this 'phrase' was tested by a DC based consulting firm and focus group. 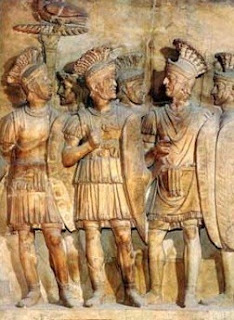 It takes tremendous courage to speak out against the machine, the Evil Empire, Moloch, Big Brother, the M.I.C. When the Crown persisted against the colonies, William Pitt rose to protest in Parliament:

If I were an American, as I am an Englishman, while a foreign troop was landed in my country, I never would lay down my arms! Never! Never! Never! --William Pitt,

Many of Rome's enemies were at least as civilized as Rome and, by some standards, more so. Former 'Flying Circus' mainstay Terry Jones, a medieval scholar with several documentaries to his credit, may have pinpointed the source of many myths about Rome --Rome itself. It was Rome, primarily --not its conquered provinces --that wrote its history. Like American historians biased against the Native Americans, Roman historians were surely biased against non-Roman civilizations. The 'Empire' may have written off its conquered as 'uncivilized, savage and barbaric' though many were 'organized, motivated and intelligent individually and in groups, tribes, cities, nations'. Few, if any, posed an 'imminent threat' to Rome. Few, if any, had intentions of overthrowing Rome or plundering the empire. There may have been no terrorist threat to the citizens of Rome. The story of Rome from the point of view of the Britons, German, Gauls, Greeks, Persians, and Africans, is, perhaps, a foretaste of the contrarian history of the United States that is sure to be written.

The Vandals didn't vandalize - the Romans did. The Goths didn't sack Rome - the Romans did. Attila the Hun didn't go to Constantinople to destroy it, but because the Emperor's daughter wanted to marry him. And far from civilizing the societies they conquered the Romans often destroyed much of what they found. --Terry Jones' Barbarians

Terry Jones vs The Empire