Bush's Supreme Court to the GOP: there's more than one way to steal votes! 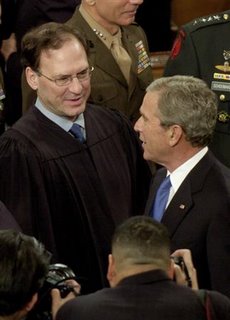 It was most probably the year 1980 when Tom DeLay revealed his vision thing: gerrymander the state of Texas so that only goppers can get elected. Earlier, Robert Kennedy had said:

Some men see things as they are and ask 'Why?' I dream things that never were and ask, 'Why not?'"

DeLay, however, dreamed of GOP majorities that never were and asked why the hell not? DeLay dared to dream of election-proofing an entire state, striking blows against Democracy from the bottom up. That was a difficult dream in 1980, when expensive IBM mainframes lacked the power that laptops have today. It's easy to imagine a Republican circa 1980, pouring over census tracks, trying to figure out how district lines could re-drawn to The goal was to divide and conquer —re-assign Democratic voters to new, overwhelmingly GOP districts. Tom DeLay must love the advances in computer technology; they've help make his vision thing come true.

Something Wicked This Way Comes

In those early days in Texas, the GOP was making noise, flexing its muscles, kissing up to the "moral majority". These were heady times for the GOP. Ronald Reagan had won the Presidency and Bill Clements had just pulled off a stunning upset to become Texas' first Republican governor since Reconstruction days.

In retrospect, the GOP sweep was not merely apocalyptic, it was the harbinger of yet more horrible things that have, in fact, come to pass.

On the morning of his own election to the State Senate, a Sugar Land "neighbor" of Tom DeLay would rub his hands like a river boat gambler and ask: "Now....when do I get to meet with those lobbyists"? I witnessed that act. And it forever changed my thinking about the GOP. It was the end of political innocence. I would never see Mr. Smith Goes to Washington in quite the same way ever again.

How the GOP sold Democracy down the river

Certainly, the GOP had hit upon a sure-fire strategy for keeping what was theirs and taking what wasn't. It was a simple, three point strategy: Get power; gerrymander the state in order to keep it; and build up a powerful ruling cabal. Since then, the Abramoff scandals have proven that the GOP has most certainly blazed new trails, literally partnering with powerful lobbyists in order to enrich personal GOP fortunes. Dick Cheney has taken it to new levels, cutting out the middle man entirely, running the entire nation for the benefit of Halliburton.

Now —thanks to the US Supreme court, majorities of either party are not limited to re-districting only after a census. A worrisome 7-2 decision has clearly put the highest court in the land in the position of supporting —yet again —a purely partisan decision that helps only the GOP. Whenever it might appear to state GOP leaders that the demographics of a district are changing, new lines can be drawn. The party in power draws them. And, historically, the GOP has always drawn those lines to its own advantage. Unlike 1980, this act of theft is done by sophisticated computers.

SCOTUS threw Texas Democrats a bone. Big deal. One district in Texas was found to have been drawn such that the hispanic constituency completely lost their representation. One district, when, in fact, the GOP has stolen an entire state once yellow dog Democrat —and proud of it. One district got a symbolic nod from SCOTUS but too late to give back to some 100,000 Texans the very representation that is promised them in the US Constitution.

Sadly, Democracy in America has not died in a blaze of glory. There is no Phoenix from the ashes, no fragile promise of its return. No one has pledged its defense unto death itself. "Give me liberty or give me death" seems a relic but not because Henry was wrong. I haven't heard anyone, save Stephen Colbert, look Bush in the eye and tell him that his ship of state is the Hindenberg. There are no heroes —not even the redeeming cartharsis of Greek tragedy. American Democracy dies daily of a thousand tiny, ignominious cuts. No blaze of glory —rather, a whimper before oblivion.

Some updates on Bush's war on Constitutional government. Cautiously, I ask: has the Supreme Court —at last —decided to check Bush's unprecedented war on the separation of powers?

The ruling is a major setback to Mr Bush's 'war on terror'.

John Paul Stevens, the judge writing for the majority, said the administration had violated US military law and the Geneva Convention in ordering the military tribunal.

The ruling came in the case of Salim Ahmed Hamdan, a Yemeni who worked as a bodyguard and driver for Osama bin Laden in Afghanistan.

Hamdan, 36, one of over 400 foreign prisoners at Guantanamo, has spent four years in the US prison in Cuba. He faces a single charge of conspiring against US citizens from 1996 to November 2001.

Tony Snow, a spokesman for President Bush, said the White House would not comment until lawyers had had a chance to review the decision.

Mr Bush was granted expanded powers by Congress one week after the September 11, 2001 attacks on America, but the Supreme Court's decision makes it clear that Mr Bush has overstepped those powers. ...

At the very least, the high court is now on record as obliging a rogue "President" not just to specific international laws but the principle of international law itself. An aide to my congressman told me that international principles —such as the Nuremberg Principles and the Geneva Conventions —infringed upon US sovereignty. Naturally, I disagreed and pledged to work for an opposing candidate.

Signing away our freedom

President George W. Bush, through his use of "signing statements," has declared himself, on more than 750 separate occasions, above the laws of Congress, the laws of the land and even the Constitution of the United States.

With each stroke of his pen, Bush wipes away more of the freedoms once guaranteed by the Constitution, undermines the system of checks and balances that is supposed to protect our government from despots and brings this nation closer and closer to the precipice.

His actions come, ironically, as the nation prepares to celebrate the birthday of its independence, an independence threatened as never before not by Islam-spouting madmen but by an opportunistic politician with a fountain pen.

Signing statements allow a President to say he will choose to ignore a law passed by Congress if he feels that law infringes upon his powers during times of war or national crisis.

Thanks to Bush, we're at war, a war based on lies, a war predetermined by an administration that decided, long before the events of September 11, 2001, to wage against a manufactured enemy for political means.

Those attacks provided a much-welcomed opportunity to galvanize a shell-shocked nation into an ill-conceived war that cannot be won, fought against a determined enemy who cannot be defeated in a land that neither requested nor welcomed our manufactured campaign to free it. ...

The Existentialist Cowboy
Posted by Unknown at 8:10 PM 17 comments: