Why SCOTUS is Overdue an Overhaul 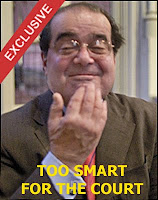 America, we have a problem --the Supreme Court! The Supreme Court, under Scalia's evil influence, has decided that 'legal abstractions' --corporations --are people. In fact, people are defined by consciousness, volition, and responsibility. Corporations have none of those attributes.

Corporations are: 1) not conscious as consciousness is understood by scientists and philosophers; 2) utterly without volition but that of numerous 'individual decisions' by real persons; 3) those persons making decisions are, in fact, responsible under the law had not SCOTUS intervened. Therefore, one is inclined to conclude that five ideologues on the court had precisely that outcome in mind. Certainly, this infamous decision must take its place among Dredd-Scott and Bush v Gore.
The courts are empowered to enforce that principle if the United State government should violate it! Even more significant is the fact that subsequent SCOTUS decisions have obligated the various state governments as well. In other words, Texas nor Kansas nor Lousiana nor any state may violate your rights under the 14th Amendment.

The ONLY exception, it seems, has been the corporate 'community'. Corporations have been placed above the law and for no other reason than the fact that A. Scalia and the other 'Republicans' on the court are biased if not bought and paid for! Clearly, the Supreme Court under A. Scalia, is crooked, handing down gibberish instead of law, circumlocutions instead of reasoned arguments based upon the Constitution or precedent!

Scalia is credibly reported to have said: "I am too smart for the court!" Fine! I suggest he seek employment elsewhere! Fine! Scalia --you're fired! Take your over-rated IQ and your bloated mid-section to the personnel department of any IT department in the nation. Ask them to give you an IQ test! Let's see how 'smart' you really are! Let me know how you make out!

I have news for Scalia: if corporations are 'people', then they should be tried for murder when they murder people. Check the history of Dow Chemical, DuPont and Union Carbide at Bhopal. If corporations are 'people' every one on the board and among decision making executives are culpable and should be prosecuted for the crimes that were committed.

The U.S. Supreme Court, under Scalia, cannot be respected! These have been the very worst years for the Supreme Court. Such a court does not command or deserve our respect. A nation without a court deserving of our respect is a lawless nation.

Posted by Unknown at 3:41 AM No comments: