The New Age of 'Elites', 'Robber Barons' and 'Social Darwinists' 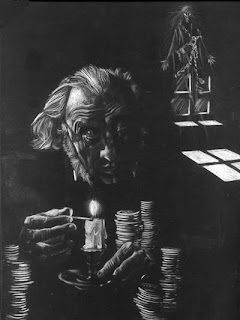 Social Darwinism is at the very root of an impending economic collapse but it won't be the best or brightest who emerge unscathed on the other side! Social Darwinism is the survival of the most ruthless. Real Darwinism is reviled because it disproves the lies the rich tell themselves to help them sleep at night. The right wing benefits when issues are obscured and when enough dust is kicked up by "intelligent design" to obscure the real issues and various strawmen to boot.
Simply, Social Darwinism does not follow from "Darwinism" and, worse, it attributes to Darwin positions he never took. The term "survival of the fittest" was never used by Darwin. It has been variously attributed, but Hofstadter traces the phrase to 19th Century American robber barons, rail road men making fortunes connecting one coast with another.

Railroad executive Chauncy Depew asserted that the guests of the great dinners and public banquets of New York City represented the survival of the fittest of all who came in search of fortune. They were the ones with superior abilities. Likewise railroad magnate James J. Hill defended the railroad companies by saying their fortunes were determined according to the law of survival of the fittest.—Hofstadter, Richard; 1959; Social Darwinism in American Thought, Braziller; New York.

These were most certainly the 'robber barons' who wished to be photographed wearing laurel wreaths, pretending to be emperors. Elsewhere, the term is attributed to Herbert Spencer who inspired a generation of radicalized, latter-day robber barons. Few of them evinced the "...quality of mercy" so immortalized with but a few words by Shakespeare --'The quality of mercy is not strain'd, It droppeth as the gentle rain from heaven". By contrast ...

[Herbert] Spencer said that diseases "are among the penalties Nature has attached to ignorance and imbecility, and should not, therefore, be tampered with." He even faulted private organizations like the National Society for the Prevention of Cruelty to Children because they encouraged legislation.—Social Darwinism and American Laissez-faire Capitalism

A fallacious corollary to "Social Darwinism" is often phrased this way: the rich are rich because they are better, work harder and are more intelligent. George W. Bush put it more crudely: “The poor are poor because they are lazy!” So --why was Bush Jr not poor?
In the same vein, the conservative economist Joseph A. Schumpeter likened recessions to a "cold douche". One wonders: who is "douched" and how? More importantly: who decides who gets 'douched'? Who decided that New Orleans would be left to its fate and the goons of Blackwater?
Currently, the nation faces economic calamity. However fallaciously, you can be sure that the right wing will not only benefit from the misfortunes of millions, they will try to figure out a way to blame them. It's the right wing way. But it's wrong! Spencer believed that because society was evolving, government intervention ought to be minimal in social and political life. It didn't matter to Spencer that government is but a function, indeed, a creation of society and responsible to it. Seen in that light, efforts by privilege to blame the poor for their own rapacious and often dishonest or incompetent behaviors are absurd. Nevertheless, American capitalism remains greatly influenced by Spencer. The 'model' is still found in textbooks for Economics 101. It describes an ideal of American capitalism --“rational man” making rational decisions in a free and --presumably --rational market. But, in practice, economic decisions may or may not be rational and the free market exists only hypothetically. The market has been anything but rational.Because the 'theories' of Spencer and, earlier, Adam Smith, often stress the 'practical', it is forgotten that Spencer and Smith were, themselves, 'theorists'. Every model we make of the world of sense experience is 'theoretical' by definition. The word "theory" is either misunderstood by the right wing or deliberately perverted for the propaganda value. The word 'theory' is wrongly used as a pejorative. The right wing is inconsistent. 'Theories' from Spencer and, more recently, Milton Friedman or Arthur Laffer are are conveniently ignored or praised while 'theories' from everyone else are 'mere theory'. Last time I checked, 'right wing theories' were still 'theories' though most often and in reality they are simply frauds, lies, scams and 'white collar heists'.

Having waged war on the word "theory", the right wing likes to couple it with another word similarly victimized by right wing propaganda. That word is "conspiracy" --a perfectly good word, in fact, a legal term about which there is a venerable body of case law, thousands of SCOTUS decisions and some 400 years of common law. See: Findlaw or Cornell University Law Library online. Given techniques perfected by Herr Goebbels for Adolph Hitler, the combination of "conspiracy" and "theory" is lethal. The loss of these words to an adult vocabulary cripples the thought process itself, indeed, intellectual endeavor of any sort. It must be noted that every great scientist was or is a theorist. Einstein was a "theorist". So was Newton, so too Darwin. So, too, Watson and Crick. Too much is made of 'right' and 'wrong'. It is a mistake to conclude, for example, that Einstein 'replaced' Newton. In fact, Einstein rests upon Newton's shoulders. Einstein is Newton from another angle. Einstein may be thought of as the hypothesis that Newton himself refused to make. [See: The Man Who Changed the Universe] Einstein does not refute Newton, he enlarges upon both Newton and Galileo. Galileo's equations describing the acceleration of falling bodies describes the very curvature of space-time.

Einstein has been confirmed no more times than Darwin; Newton is close enough for mundane applications or "government work" and Einstein will one day help us navigate the galaxy. Significantly, neither "theory" has been challenged in court —though both theories may very well be replaced one day by a "theory of everything", a TOE.
Only theories not liked by the right wing wind up in court, an absurd place to settle questions of science in any case. Law courts are inadequate to decide questions better resolved by observation and experiment, not rhetoric or case law. See: Darrow, Darwin & Dayton, the video at the end of this article.

There is a political agenda and a constituency behind the campaign of attacks on Darwinism. This constituency supports Intelligent Design for the same reasons the great rail road robber barons found support in the work of Herbert Spencer. The continued economic superiority of an entire class depends upon the widespread public acceptance of religious and/or ideological views which justify the existence of 'superior status'. Hitler, likewise, found in pseudo-science and mythology much justification for his anti-semitic crusades, his campaign of genocides, his wars of naked aggression. Theories are often never of a final form —nor should they be! Unlike ideology, real science is self-correcting as new facts emerge from research. Darwin's theories were not only confirmed by Mendel, they accommodated Mendel which, in turn, strengthened Darwin. The science of genetics and the discovery of "mutations" confirm Darwin beyond any reasonable doubt. Every cowboy knows the truth of Darwin if he's never heard of him: "Never kill a slow roach; you just improve the breed!" As succinct a description of natural selection as I've ever heard. Likewise, every farmer who has bred for specific traits knows the truth of Darwin.
Future discoveries, like those of Mendel, may modify our views of Darwin, but will not discount them. Our view of Einstein is already modified but he is confirmed in many ways, notably at Alamogordo, Hiroshima, and Nagasaki. Light, indeed, bends around stars and other 'gravity lenses', time slows at near light speeds, space-time is a four dimensional continuum. More to the point, no one has ever sued because Einstein's theories were odds with a particular dogma or a political agenda. The right wing's disingenuous position is analogous to that of the Pope who forced Galileo to recant. I was critical of Ron Paul because his economic thinking was stuck in the 19th Century. The right wing generally, however, is stuck in the 17th. It is certain that no future discovery will confirm "intelligent design", meaningless word play beyond any confirmation of any kind! Theories explain "facts" but facts can often confirm good theories as "fact”, just as facts have tended to confirm both Darwin and Einstein. By definition, doggerel is beyond confirmation of any kind. A.J. Ayer defined 'meaning' itself as that property of a 'sentence' that makes it subject to empirical confirmation. The theoretical core of ID is not meaningful and most certainly not of a type that would have been recognized by the philosophers upon whom Western Civilization is based. Intelligent design is of a religious nature and people have a right to believe it. Treating Intelligent design as science is dishonest. As science, ID raises more questions than it explains. Most obviously: who designed the designer? ID assumes a designer to 'explain' creation but cites 'creation' to prove the existence of a designer. This is the classic circulus en probando fallacy. People are free to believe fallacies, but they must not be free to impose them upon other people —especially at tax payer expense! A fact, for example, is the equation describing the acceleration of falling objects; examples of theory are both the Newtonian and the Einsteinian view of "gravitation" —seen differently by both. The entire science of genetics confirms Darwin who, interestingly, did not have the benefit of Mendel's research when he wrote Origin of the Species and the The Descent of Man. It was Mendel's research that described the very mechanism by which Darwin’s “traits” are passed on to succeeding generations. Accurate predictions are, in themselves, evidence in support of theories. [See: Evolution in Action, Julian Huxley]Critics of Darwin have said that no one has yet produced an entirely new specie by selection. But they have indeed done just that! Consider wheat! Wheat does not grow in the wild. Related to ancient grasses, wheat is clearly the result of an ancient application of "artificial selection." Had wheat evolved naturally, it would be found growing wild like prairie grass. But it didn't and isn't. Social Darwinism has harmed mankind. It rationalizes and justifies the perpetual and deliberate impoverishment of large segments of our society. The GOP will support this as a matter of policy so long as someone like Ronald Reagan can, nevertheless, make them "feel good about themselves". It is bad enough that this callous disregard for human life is fallaciously and insidiously associated with Darwin. That it is also a bald-face lie, a misstatement of Darwin, is unconscionable. We have thus reduced the philosophical basis for the American right wing to a single line from one of the world's great writers, Charles Dickens, whose character, Scrooge, epitomizes the American right wing

"Are there no workhouses? Are there no prisons...then let them die and decrease the surplus population."—Scrooge, A Christmas Carol