One Million Strong Against the GOP 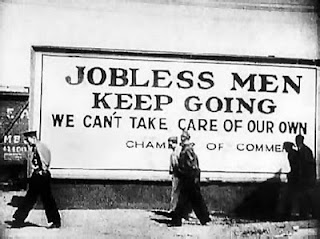 by Len Hart, The Existentialist CowboyThe GOP has been infiltrated by a kooky kult of korporatists! It is not the party of Eisenhower-like fiscal conservatives or of Progressives like Teddy Roosevelt anymore. It has become the party of the MIC and the big lobbyists on K-street. It has become the official party of the big corporations, the ruling one percent of the population which alone has benfefited from GOP fiscal policy. Ronald Reagan doubled the national debt and tripled the deficit. While revenues declined as a result, Reagan compounded the problem by ramming through Congresss a TAX CUT from which ONLY the upper quintile benefited. It was a recipe for historic deficits, in fact, national bankruptcy. Concurrently, a trend, in which the rich get richer and everyone else poorer, did not abate until Clinton's second term. Under Bush the Shrub, the trend resumed with a vengence. Today --as a result --just one percent of the nation owns more than about 95 percent of the rest of us combined. The inevitable result of transferring this wealth to the wealthy is that the net gain to the wealthy is, in fact, exported out of the economy and into offshore bank accounts. 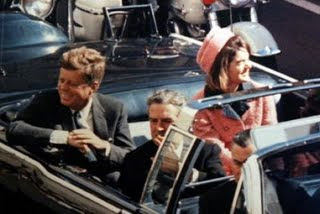 That being the case --why were we surprised that the inevitable collapse occurred under Bush and carried over into the Obama regime. In effect, monies were removed from the economy --a contraction. Economists call this recession. I have enough material on Reagan's irresponsible profligacy to fill several volumes, more data than I have time to 'twitterize'. Sometimes, you just have to read the long, dull story.
Bottom line: the GOP is just not credible when it claims to be fiscally conservative. The GOP is just not credible when it tries to trick you into believing that there is no difference between the GOP and Obama. The GOP has no legs when it claims to be fiscally conservative. Listening to goppers cry about Democratic 'deficits' is like hearing a million or more crocodiles singing the Hebrew Slave Chorus.
Because the big corporations dominate K-street, Americans inevitably get a ONE SIDED view, the GOP spin. The actual facts available from the Labor Dept, Bureau of Labor Statistics, Bureau of Economic Analysis and EVEN the conservative Brookings Institution paint a different picture. It's hard to set the record straight on a TWITTERIZED net. Even so some key facts utterly disprove the GOP/Reagan myth. To wit: The Reagan ERA was a period in which corporate PACs literally compelled Congress to pass pro-business legislation. According to supply-side theory, these actions should have nudged the economy in the right direction, not plunge it into the worst recession in 40 years. But that is PRECISELY WHAT HAPPENED. The resulting 'depression' of some two years was the longest, deepest since Hoover's GREAT DEPRESSION triggered by the crash of '29, an event not seen again until Shrub's second term. Given the economic 'crimes' committed by Reagan, Sr, and Shrub, the lame ass charges against Harry Reid and Nancy Pelosi pale. How the GOP --which ran up the highest debts and deficits in US history --can lay that rap on Democrats which had control of Congress just eight of almost 20 years is just plain ludicrous. ANY Dem Prez beats ANY GOP Prez since LBJ. Now --I would say that JOB GROWTH --essential for a healthy economy --is reason enough to fire the GOP until it repents and gets down on its knees to beg forgiveness of the American People, until it pleads, on its knees, for political salvation. Say Hallelujah!!!

This article would not have been possible had not Steve Kangas braved the wrath of a crooked GOP! Given that background, I have a message for Richard Mellon Scaife: FUCK YOU!

The Who: Won't Get Fooled Again!
Additional Resource: One Million Strong Against the Republican Party

What Must Obama do about the Lie of the Century? 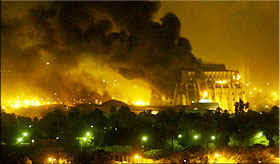 Obama should get off his butt and insist upon war crimes trials of George W. Bush, Dick Cheney, Donald Rumsfeld and Condo Rice. That Iraq had WMD was a bald faced lie to justify the seizure of Middle East oil fields! Ergo --every Iraqi death following is one count in a WAR CRIMES INDICTMENT on the scale of those charged to Adolph Hitler and high mucky mucks in the murderous Third Reich.

TITLE 18 >(a) Offense.— Whoever, whether inside or outside the United States, commits a war crime, in any of the circumstances described in subsection (b), shall be fined under this title or imprisoned for life or any term of years, or both, and if death results to the victim, shall also be subject to the penalty of death.-- PART I > CHAPTER 118 > § 2441, War crimes

I say let the trials begin with George W. Bush who believed himself above the law and that the US Constitution was just a 'goddamned piece of paper'!

The government official who wrote the first draft of the "dodgy dossier" that helped propel Britain into war in Iraq today admits, "We were wrong."John Williams, a former Foreign Office aide, said last night that publication of his document would expose how members of Tony Blair's team were locked in a mindset that made military action inevitable.On Wednesday, ministers will hit a deadline for publishing the 2002 document, after years of resistance.The Williams draft was written in September 2002, only days after Mr Blair, then Prime Minister, announced that the Government would publish a dossier of intelligence showing that Saddam Hussein threatened the world with his weapons.The draft was not disclosed at the Hutton inquiry into the death in 2003 of the former Iraq arms inspector David Kelly. The scientist had suggested the dossier was exaggerated to justify the UK joining the 2003 invasion.--'Dodgy dossier' was 'wrong', its author says, The Independant

According to the Times of London, Ministers had been warned in July 2002 that it "had no choice but to find a way" of making the American-led invasion of Iraq legal. In other words, the government in Britain KNEW that what Bush was doing in and to Iraq was a prosecutable war crime but, instead of doing the right thing, Britain sought to 'make it legal'. The very phrase --'to make it legal' --speaks to guilt and pre-meditation of both the US government of George W. Bush and the British government of Tony Blair in whom so many hopes had been invested, later dashed by the corrupting influences of the worst and most criminal White House in US history.
Damn Liars and War Criminals!
If the nation had wanted another eight years of war, a total of some twenty years of quagmire, war crimes and other atrocities. it might have put two idiots in the White House --John McCain and the even stupider Sarah Palin.

Rather, the nation wanted change and expressed that hope by electing an articulate man of substance. Committing the nation to an quaqmire well underway is NOT what the nation voted for. Another eight years of Bush's war crime is NOT the path the US should be on if it wishes to restore its blackened image throughout the world.
Nope! No WMD under the podium!