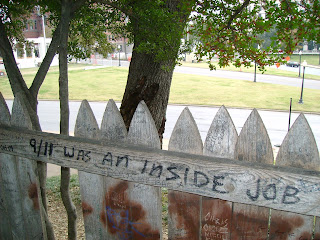 The Conservation of Matter and Energy is summed up simply:


During an ordinary chemical change, there is no detectable increase or decrease in the quantity of matter.

The result summed up in the quoted section describes what was --in fact --observed at the site of the collapse of the Twin Towers on 911.

The fact that towers of steel were reduced to "dust" supports my criticism of the BUSH CONSPIRACY THEORY (19 hijackers is, by law, a conspiracy); it does not support the conclusion of Bushco's 911 commission. The commission had concluded that the steel towers collapsed as a result of HEAT the source of which was said to have been burning jet fuel.

JET FUEL is just kerosene. Kerosene does not burn hot enough to weaken steel, let alone melt it. Every paper I have managed to scrounge from M.I.T. as well as PEER REVIEWED papers by experts, confirm my contention that airliners could not have brought down the towers. The melting point of steel is some 1,370°C (2500°F).  A jet fuel fire is not even close. Even if the fires had reached that temperature, an evenly distributed heat pattern is required to get the "controlled demolition" look --straight down at free fall rates of acceleration!

Random areas of greater and or lower heat cannot be expected to produce results that DEMOLITION EXPERTS routinely produce as a result of careful placement and timing. At last --there is the question of whether or not an ALUMINUM BODIED aircraft will or can penetrate the outer walls slicing steel beams with mere aluminum wings. Had that happened, I suspect the aluminum wings and aluminum bodies would have folded up like an squeeze box just prior to its fall to the sidewalk at street level.

The laws of physics were not repealed on 911. That means means that aluminum --among the lightest of metals --did not and will never penetrate industrial steel, i.e, the steel that was was used to construct the outer "cladding" and as well the even DENSER CORE. Both core and outer walls collapsed like a stack of playing cards.

This is not the only FATAL HOLE in Bush's theory. The worst and most obvious hole is that there is simply NO ADMISSIBLE EVIDENCE that the "said" flights were even in the air that day. The BBC interviewed some of the alleged hijackers after they were said to have died in the attacks. Had they been raptured? By Jehovah or by Allah?
As Conan Doyle said: "When you have eliminated the impossible, whatever remains, however implausible, must be the truth!" The official conspiracy theory is utterly impossible and may be eliminated! What is left is the truth: 911 was an inside job. No one should expect me to believe or "buy into" Bush's bullshit theory, an outrageous theory that posited 19 non-existent Arabs who cannot even be placed at the scene of the crime! Anyone expecting me to believe must PROVE IT TO ME! To Republicans, wing nuts or anyone who bought it, I say: get a working brain cell for a start! In the meantime, shut the fuck up!

Lucky Larry Silverstein got bailed out and received a whopping insurance settlement. George W. Bush (and gang) got the war that they wanted. Americans must wake up and ask: was it worth it?
This is the most tragic, sorriest chapter in U.S. history. Future historians will refer to it as the beginning of the fall of the American Empire.

by Len Hart, The Existentialist cowboyEvery major economist has espoused the 'LABOR THEORY of VALUE'. That includes the conservative Adam Smith and the left-leaning Karl Marx. ERGO: a declining "real' wage that should be going to labor TRICKLES (in fact, FLOWS) upward to the ruling elites.The Axis of Reagan/GOP are wrong. Wealth does not and has never "trickled down"."Suppy Side Economics" was and remains a scam, a con sketched out, it is said, on a napkin by Arthur Laffer. Laffer is remembered for his "Laffer curve" said to illustrate the theory that by reducing taxes for the very wealthy would result in increased production.

The GOP embraced it immediately! They claimed that by cutting taxes for their 'base' of wealthy folk, wealth would trickle down and create jobs. The very opposite occurred. Reagan's tax cuts were followed by a depression of some two years, the deepest, longest depression since Hoover's big one! Not addressed with Laffers' curve is the fact that elites have the purchasing power to bid prices UP! That's not inflation! It's THEFT! At least since Ronald Reagan occuped the White House, the GOP has tried to peddle tax cuts benefiting only the eilte classes with various forms of trickle down theory. It has never worked! By now, the wealthy (if not everyone else) knows that 'trickle down" or "supply side theory" is bunkum. The elite classes, however, will always resurrect it if it is believed that they can milk it for another tax cut or "stimulus" as they often like to call it. The elites know what the general public does not: wealth does not 'trickle down'. Rather --it is labor which creates value and 'value' is the very soruce of a nation'swealth. Windfalls and tax cuts are not re-invested in ways that create jobs. They are squirreled away offshore or, in other ways, removed from circulation. The results are obvious: a recession/depression or --at best --a slow down follows every GOP tax cut. Every GOP administration since 1900 has presided over a recession/depression. Just a fluke? Not a chance!
Posted by Unknown at 3:00 AM 2 comments: