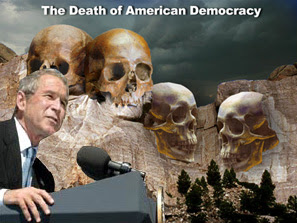 Whether or not Bush manages to plunge the world into a new dark age may depend upon which version of the recent US/Iran confrontation is believed. So far, Bush's utter lack of credibility may be working to our advantage. One dares not think of the consequences to world peace if Bush had embarked upon this tour of the middle east with a shred of credibility, a modicum of political capital among every Middle Eastern capital but Jerusalem.Israeli radio reports that Bush promised Israeli opposition leader Benjamin Netanyahu that the United States will join Israel to nuke Iran. CNS reports the Bush administration had seriously considered the nuke option but put it on a back burner. Lydia Georgi, writing in Pakistan's Daily Times, thinks Bush is unlikely to win support outside Israel for any US military action against Iran. It would appear, however, that the US has already tried to provoke a Gulf of Tonkin-like incident, releasing a video tape in which it is claimed that five small speed boats confronted US Navy ships in the strategic Straits of Hormuz on Sunday. Iran claims its video tape proves that its boats did not threaten US vessels in the Gulf.

Iran Version
Here is the US version:
US Version
Completely differing versions of events. Indeed, ABC News reports that voices on the recording may not have come from the Iranian speedboat. It comes down to credibility. The Bush administration has none. Bush is power mad. Someone should have told him that credibility is power! Real Texans have always known that.
Noam Chomsky
The Bush itinerary includes Kuwait, Bahrain, the United Arab Emirates and Saudi Arabia, a trip he claims is aimed at promoting peace between Israel and Palestinians. But it's what Bush calls the “aggressive ambitions” of Iran that has already trumped every other topic. The Iran version of the events in the Straits of Hormuz are credible.

Alec Russell: So is America going to bomb Iran?
Jack Straw: Iran attack would be 'nuts'

The Bush administration is planning to use nuclear weapons against Iran, to prevent it acquiring its own atomic warheads, claims an investigative writer with high-level Pentagon and intelligence contacts.

President George W Bush is said to be so alarmed by the threat of Iran's hard-line leader, Mahmoud Ahmedinejad, that privately he refers to him as "the new Hitler", says Seymour Hersh, who broke the story of the Abu Ghraib Iraqi prisoner abuse scandal.

Some US military chiefs have unsuccessfully urged the White House to drop the nuclear option from its war plans, Hersh writes in The New Yorker magazine. The conviction that Mr Ahmedinejad would attack Israel or US forces in the Middle East, if Iran obtains atomic weapons, is what drives American planning for the destruction of Teheran's nuclear programme.

Hersh claims that one of the plans, presented to the White House by the Pentagon, entails the use of a bunker-buster tactical nuclear weapon, such as the B61-11, against underground nuclear sites. One alleged target is Iran's main centrifuge plant, at Natanz, 200 miles south of Teheran.

A US intelligence report --released in December --pulled the rug from under Bush's primary pretext for war on Iran. If Bush wishes to begin a nuclear war, he will have to manufacture the pretext as Hitler faked a polish attack on German radio towers, as the US hoaxed a "Gulf of Tonkin" incident. Surely, there are some members of Bush's otherwise challenged administration who have bothered to read Goebbels and Goring. Nazi literature seems to have become Bush's Junior Woodchuck's Handbook. An update:

Bremerton,WA has a monument to presidential lies in our harbor...The Gulf of Tonkin's own USS Turner Joy. Because it is a Navy town, people refuse to acknowledge that our involvement in the Vietnam War was a farce. Even Johnson was dubious of the attack- it happened in the middle of the night and Johnson lamented "that they were probably shooting at a pod of whales"

I watched the video that the Pentagon put out and I thought that there was nothing there...Bush is just trying to provoke an attack so he can leave office with the world in flames...

You know what? I'm to the point that I don't even care....I'm so sick and tired of war, by our country and all the piddley little countries whose wars we support I could spit. I hope he does. Then when Iran blows us to bits, the world can have what's left of us like they want, and I don't have to put up with anymore idiots. Have a great day. BTW; good post.

bremgreg, I hadn't heard the Johnson remark. That's priceless. And, tends to ameliorate his own shortcomings somewhat.

zena, I think we all share that feeling. I have been beyond anger for awhile now. I was raising hell about Reagan when everyone else was swooning over him. Keep up the good fight.

Has it been erased?

anonymous...try again. The video is running fine on this end.

the real issue is iraq sunni or latter....nice blog too, chk me out one day

Two years ago, Ron Paul said, "I am concerned, however, that a contrived Gulf of Tonkin-type incident may well occur to gain popular support for an attack on Iran."

First off- Sy Hersh never broke anything about Abu Ghraib. that story was out for over a year before he picked it up because the photos made it a sexy, profitable scandal (as he admitted when I confronted him about at a public event in USA). That is not to say when he said it it was not true. But others said it long before. But if you are not famous, or white you'll never get heard, despite the high quality of your work. WAKE UP WEST!

since when is Jerusalem a Middle Eastern capital?

Jerusalem has been an Middle Eastern "city" since about 3000 B.C.E.! It was in 1010 B.C.E. that Solomon built the temple, making it by definitions of the time --a "capital". And the last time, I checked that area is called the "Middle East".

I am always torn between two probabilities 1.bush(schrub) and chainney used the mel brooks movie "Blazzing saddles-govenors office sceens" as their guide to world affars and how to deal with the people of rockridge USA.
2.the dick and schrub show apes the kid cartoons "Pinkie and the Brain" Schrub:Well trudblossom what do we do today?Chainey"Same as always Pinkie try to take over the world!why cant we stop these crooks?

Let the Izzies fight their own local wars. Leave the U.S. out of it. We're sick of it. Close down that damned U.S. base on Israel soil, too. I'm still waiting for that dual loyalist, Douglas Feith, to get arrested and charged with treason, and then be imprisoned for filtering false Israeli intelligence through his Office of Special Plans (how nazi) to justify the attack on Iraq, which had NO TIES to the CIA created Al-Cia duh. WHAT A TRAITOR!!!!

I don't think Bush will use our nukes on Iran. Israel has plenty of nukes of her own, and doesn't need ours. We'll supply satellite data and aerial refueling if necessary, but that's about all the help that Israel needs to shut down the Iranian nuclear program. It's clear that nukes will be necessary to penetrate the deep bunkers underground which even the MOAB can't penetrate.

I don't think Bush will use our nukes on Iran. Israel has plenty of nukes of her own, and doesn't need ours.

The whole world 'knows' Israel has nukes but if you should ask Ehud Olmert that question you would get Israel's 'official ambiguity'.

...that's about all the help that Israel needs to shut down the Iranian nuclear program.

To summarize your assumptions: Israel has all the nukes it needs to shut down Iran's nuclear program AND Iran has only a 'program' --not a workable or deliverable weapon.

The MSM never raises the obvious question: why does Israel get to develop and use NUKES and Iran doesn't?

The MSM never raises that question because the only truthful answer to it is American imperialistic hypocrisy.

In fact, US animus toward Iran has nothing to do with nukes. It has to do with OIL. Iran has it and Bush wants it.

As long as the US persists in spreading transparent malarkey to support its equally transparent and corporate designs upon the world's resources, the US will continue to lose all credibility throughout the world.

Stop me! My sides are hurting!

That has gotta be the most UN-INFORMED, the STUPIDEST 'comment' EVER posted by ANY IDIOT on this forum.

JT, I understand you got thrown out of IDIOTS ANONYMOUS because you posted your real name here.