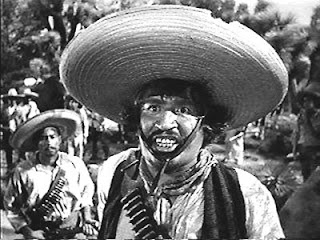 The Bush administration is trying once again to rewrite history and the law, specifically 'the official evidence against Guantanamo Bay detainees'. Typically the legal eagles in the Bush regime have it backward. Bushco should not be given a second chance to fabricate a case when it had none to begin with. Detainees have already been in detention for years in violation of US Codes and our international treaties. Bush has had years to make a case and has failed to do so. To make 'detainees' --illegally detained to begin with --wait still longer for justice is, in itself, another crime to be charged to George W. Bush.

A capital crimes case against Bush is better than the 'case' Bush has against the 'detainees'. This is a regime that commits war crimes and tries to make them legal after the fact --a recipe for dictatorship and tyranny.

A Federal judge will review the so-called evidence against detainees in the wake of the recent high court decision. Typically, Bushies want more time to fabricate another 'case'. What was wrong with the case they had was this: they didn't have one!

WASHINGTON - The Bush administration wants to rewrite the official evidence against Guantanamo Bay detainees, allowing it to shore up its cases before they come under scrutiny by civilian judges for the first time.The government has stood behind the evidence for years. Military review boards relied on it to justify holding hundreds of prisoners indefinitely without charge. Justice Department attorneys said it was thoroughly and fairly reviewed.Now that federal judges are about to review the evidence, however, the government says it needs to make changes.The decision follows last week's Supreme Court ruling, which held that detainees have the right to challenge their detention in civilian court, not just before secret military panels. At a closed-door meeting with judges and defense attorneys this week, government lawyers said they needed time to add new evidence and make other changes to evidentiary documents known as "factual returns."Attorneys for the detainees criticized the idea, saying the government is basically asking for a last-minute do-over."It's sort of an admission that the original returns were defective," said attorney David Remes, who represents many detainees and attended Wednesday's meeting. "It's also an admission that the government thinks it needs to beef up the evidence." -- APNewsBreak: US asks to rewrite detainee evidence

Rather than giving the Bush administration a second chance to 'beef up the evidence', Bush should be preparing a defense against charges his criminal regime held the detainees for years in violation of numerous international prohibitions, laws, as well as US criminal codes. The Bush administration should be beefing up its defense against charges that it committed capital crimes. 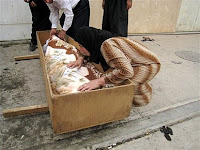 That assumes, of course, that Bush has a defense. To give Bushies a 'redo' now is absurd. The Detainees have already been held for years in violation of every civilized principle, common law, US Codes, the principles of Nuremberg and Geneva. Bush should not be given a 'redo'. He should be given an indictment! There is an open and shut case against Bush for his having authorized the commission of capital crimes. He even boasted about it in his State of the Union Address of 2003.

All told, more than 3,000 suspected terrorists have been arrested in many countries. Many others have met a different fate. Let's put it this way -- they are no longer a problem to the United States and our friends and allies. (Applause.)--Bush, State of the Union, 2003

Bush either has a case against the 'detainees' or he does not. If his criminal gang had had cases, it would have made them long ago. Some seven years or so is more than enough time when, in fact, Bushco should have had 'probable cause' --at the time --to imprison 'detainees' at Guantanamo, Abu Ghraib and other US hell holes through the Eastern European gulag. Bush then should have been given a reasonable amount of time in which to make cases or drop them. It is past time to 'put up or shut up! It is time, rather, to be filing capital crimes and other criminal charges against Bush.
Posted by Unknown at 2:11 AM

Right on, Len. The correct Constitutional remedy is not to allow Bush and Cheney to run out the clock and ride off into the sunset and collect a big, fat government pension - it is IMPEACHMENT! These criminals need to be put on trial and if necessary, executed, for their treasonous behavior.

There is no excuse for constitutional abuse, and there will be little to no remedy for the the anger and contempt many of these detainees will have when they are freed. Bush was asked recently what he thought about data that implied the incursion into Iraq had in fact increased the threat of terrorism by swelling the ranks of recruitment. Bush dryly said to the reporter: "I don't care"

You're right, benmerc. Bush doesn't care and neither does his psychopathic party. They will simply cite the increase in terrorism as justified for increased militarism, military spending and other boondoogles and giveaways to the MIC.

The GOP remains a clear and present danger not only to the US but to the entire world.

If you think it's just the GOP, think about how absolutely the DNC is on this issue.

Obama as Pres? Give me a break. He knows NOTHING about impeachment, criminal law, nothing.

The detainees should be freed now, not after some rigged election.

I totally believe a special torture prosecutor will be announced soon; CONyers has no desire to see himself hung.

Impeachment IS on the table, as all the idiots are cornered.
ALL idiot psychopaths.

Nancy Pelosi should have recused herself long ago ..

Everything you say about Pelosi and the Democrats is true. Nevertheless --I still make a qualitative difference between 'evil incarnate' (the GOP) and 'enablers' which (since the regime of Ronald Reagan) the Democrats have increasingly become.

A Teddy Roosevelt 'Progressive' would be preferable to both wings (Democrats and GOP) of the single MIC party that we have today.

Think about it --Teddy might have done more to smash the 'trusts' but his was, nevertheless, the last administration to give a shit. He was also the first and possibly the last 'environmentalist' President.

Ideologically, I am more aligned with the Progressive Movement of the latter part of the 19th century. Call me old fashioned. As the history books point out: 'the frontier had been tamed, great cities and businesses developed, and an overseas empire established, but not all citizens shared in the new wealth, prestige, and optimism.'

One is tempted to blame Clinton's 'triangulation' of the center for the emasculation of the Democratic part. But, I'm afraid we have many others to blame as well including Tip 0'Neil. Nancy has apparently finished the job.

Why do I concentrate on the GOP? If I may be allowed to mix a couple of metaphors: the GOP is the 'head' of the monster in the belly of the beast!

The Democrats have made themselves irrelevant and --with the exception of obvious traitors (Pelosi) --not worth attacking as Bush was 'not worth impeaching". A new party will spring up on their left flank! The Ron Paul folk were an amalgam of disaffected 'left' and disaffected 'right'. If Paul had been better financed, and tweaked a bit ideologically, he might have pulled it off. He still has too much GOP stench about him for my taste. BTW --I knew and interviewed Paul on numerous occasions in Houston.