American Airlines itself is the source for information that AA Flights 11 (North Tower) and 77 (Pentagon) did not fly on 911. These flights are critical to the the government's crumbling cover up! Without those flights, Bush and his murderous co-conspirators will have to revise the big lie. They will have to concoct yet another cover story from the ground up! A cover up is on the brink of collapse when those guilty of capital crimes and high treason either turn on one another or are forced to revise the lie!

Already several demonstrable lies (many referenced in previous EC articles) are probable cause to begin a Federal Grand Jury investigation of George W. Bush's role in 911. Bush should be compelled by subpoena and Federal Marshals to testify under oath before an independent Federal Grand Jury. The AA revelations demand it!

WikiScanner discovered that American Airlines changed their Wikipedia entry to state that Flights 11 and 77 never flew on 9/11.


Two American Airlines aircraft were hijacked and crashed during the September 11, 2001 Terrorist Attack: Flight 77 (a Boeing 757) and Flight 11 (a Boeing 767). Although these flights were daily departures before and a month after September 11, 2001. Neither flight 11 nor 77 were scheduled on September 11, 2001. The records kept by the Bureau of Transportation Statistics (www.bts.gov/gis/) do not list either flight that day.
A Google search of the IP address that made the change - 144.9.8.21 - is located at American Airlines.

Why the change American airlines? Did the flights actually operate or did we just imagine all of that?

That AA claims that the two aircraft that are absolutely essential to the Bush administration's official theory were not, in fact, scheduled for flight and were, in fact, not in the air that day, is a big hole from which Bush may not escape.

According to Wikiscaner Americans Airliners changed their Wikipedia entry which now states that 'Flights 11 and 77 never flew on 9/11'.

The entry had stated:


Two American Airlines aircraft were hijacked and crashed during the September 11, 2001 Terrorist 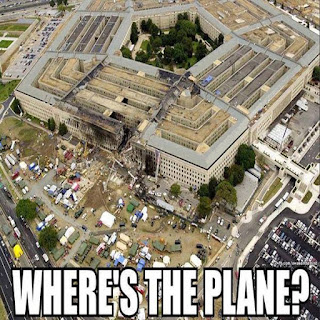 
If neither flight was in the air as American Airlines itself has so stated, then numerous 'official versions' of the 'official conspiracy theory' are all a pack of malicious lies. That includes almost every statement made by Bush. These lies are especially pernicious because they have the effect of covering up the truth, protecting the guilty and obstructing justice. These lies are an insult to the families of everyone who died as a result of the event and the subsequent cover up. These lies aggravate the crimes of mass murder, terrorism and high treason for which the penalty must surely be death.

The official story is familiar by now. At 8:20, Flight 11 stopped transmitting its transponder signal, and veered northward and departed dramatically from the westward heading of its planned route. The controllers concluded that the plane had probably been hijacked. 4 5 At 8:24, the following transmission was reportedly received from Flight 11: We have some planes. Just stay quiet and you'll be okay .. we are returning to the airport. ..Nobody move. Everything will be okay.

If you try to make any moves, you'll endanger yourself and the airplane. Just stay quiet. Nobody move please we are going back to the airport .. don't try to make any stupid moves. 6 Neither of the pilots pressed the distress call button. At 8:28 controllers reportedly watched the plane make a 100-degree turn toward the south. 7 Presumably, Flight 11 continued south along the Hudson River until it reached the World Trade Center, though documentation of this is sparse given the lack of public information.

According to NORAD's September 18 timeline, the FAA did not notify NORAD of the signs that Flight 11 was hijacked until 8:40, 25 minutes after the first signs of trouble. 8 --Flight 11, The First Jet Commandeered on September 11th, 911 Research But --if Flight 11 did not fly that day, that's all a deliberate, criminal lie! If neither Flight 11 or 77 was in the air that day, then nothing in the 'official statements' with regard to the Twin Towers of the WTC can is true.

This information is not compatible with previous EC articles in which it was revealed that NTSB data placed Flight 77 at an altitude of 273, some 200 feet ABOVE the Pentagon at the time of impact, give or take a couple of seconds or less! Moreover, it's trajectory was such that those 'eyewitnesses' who claimed to have seen it could not possibly have done so. Neither scenario is good news for Bush. Both support the statement that absolutely no wreckage traceable to a 757 was ever found at the Pentagon. Moreover, photos of an engine rotor appear to depict a Rolls-Royce engine that is used in the Global Hawk, a payload carrying missile that was, in fact, flown from the US to Australia completely by remote control.

It is certainly a much better candidate for what Rumsfeld called '...the missile that struck this building' than a 757. Here's what you need to know about the Pentagon. No wreckage traceable to a 757 was ever recovered.

Only ONE engine rotor (seen in photos) was recovered! This rotor is about one third the diameter of a 757 rotor. A 757 has two rotors, each of which are nearly three times the size of the SINGLE rotor located at the Pentagon Engine rotors are made of a Steel/Titanium alloy to withstand high temps inside jet engines.

Flight 77 could not have crashed into the Pentagon

The time has come to consign Bush's official conspiracy theory to the dust bin of history. The theory is not even a good cover story, surviving for as long as it did because millions of good Americans wanted to believe it. Millions of otherwise good Americans did not wish to believe the very, very worst about an administration that had claimed to represent and defend our interests. Millions of Americans chose to believe that the government was still responsible to us, that the government was still the defender of Democracy as we are always taught in school.

Recognizing lies for what they are is a part of the process of growing up! America, it is time to grow up! It is time to confront this heinous pack of lies! It is time to insist that the Obama administration begin a REAL investigation.

Bush got away with mass murder and high treason! It probably too late  insist that a Federal Grand Jury investigate every count of high treason, mass murder and domestic terrorism that was perpetrated upon the people of the U.S. by the Bush administration, collaborators in the Pentagon, K-Street, the Congress and the leadership of the Republican party, Marvin Bush's 'Securacom', Larry Silverstein, General Myers, Donald Rumsfeld, Dick Cheney and, of course, George W. Bush who was, at the time,m the 'Commander-in-Chief' and ultimately responsible for the orders given the US military to 'stand down'.

By Donald Rumsfeld's own admission, he was unaware of any threats to the Pentagon --the building where he was located during the September 11th attacks --until an aircraft crashed into the side of it, and he ran out "into the smoke" to see if it might be a "A bomb? I had no idea." (ABC News This Week, Interview 9/16/01).

Well, that's a pretty tall tale by any standard. The New York Times reported that by 8:13am, the FAA was aware of the first hijacking out of Boston. The Pentagon explosion, which Donald Rumsfeld claimed he had "no idea," did not occur until approximately 9:37am, nearly an hour and a half later, this after two of the tallest buildings in the world were devastated. Note that a plane hijacked out of Boston can reach Washington D.C. as easily as it can reach New York City.

It was widely reported that Pentagon personnel were indeed aware of the threats to their security, and they took security measures on that morning. But not the "Secretary of Defense." Why should the man charged with defending the United States of America concern himself with hijacked aircraft?
There is a set of procedures for responding to hijackings. In particular, these procedures were changed oJune 1, 2001 while Rumsfeld was in power as Secretary of Defense, in a document called: "CHAIRMAN OF THE JOINT CHIEFS OF STAFF INSTRUCTION, J-3 CJCSI 3610.01A"

American politics: the choice between 'most bad' and 'not really very good'The 'Conspiracy of Rich Men' Who Pulled Off 911 and Other GOP Atrocities 911 Commissioner Slips Up: Pentagon Struck by Missile

How 'Suspicious' Plane Crashes and Assassinations Benefit the Right Wing "Last Chance to Indict Bush and Cheney for the Mass Murders of 911?"

I want every herpes patient to please read my testimony, my name is SARAH MORGAN and I am from California in the USA, I contracted genital herpes from my ex boyfriend who never had any symptoms. I have had it for 4 months now., and it has affected my life. I have told my boyfriends who I trusted about it and I have never had a bad reaction, it has affected my new relationships with Smith and people think herpes is really a minor skin irritation herpes has a long term effects on health. The stigma attached to this virus by ignorant people is ridiculous. Most people have herpes in one form or another. I would like to advise people on how I get rid of my herpes and I was reading a comment on the internet,and I saw a testimony posted by a woman from Germany that she get rid of her herpes with the help of DR AHKIGBE and so I was so happy when I saw that post, that his herbal medication is free and I quickly collected the herbal doctor email and I email him within 3 hr he respond to my email and I explain things to him he told me not to worry that he is going to cure me totally with his herbal medicine he only request for little money that he will use to buy the items for the preparation of the herbal medicine, wish I send to him because the pain was too much for me to bear and after some days he told me that he has prepare the herbal medicine, that I should send him my address that he want to send it to me via DHL or FED-EX that was how I got the herbal medication and I use it as I was told and after few days I found out that my herpes was no more, i went to hospital for confirmation and it was true really that was how i got my cured. DR AKHIGBE also cure other deadly diseases like,  HIV/AIDS, HERPES, DIABETES,CANCER, ALS, ASTHMA, WEAK BODY,  HEPATITIS A&B, DENGUE FEVER, RABIES, MARBURG  DISEASE, THYROID,  HYPEROPIA, SMALLPOX, ARTHRITIS, MENINGITIS ,LUPUS, EPILEPSY, CHRONIC DISEASE, DICK AND BREAST ENLARGEMENT, MALARIA, BACTERIAL DIARRHEA HEART DISEASE., JOINT PAIN, STOMACH PAIN,  DENGUE SCHIZOPHRENIA, POLIO,MULTIPLES SCLEROSIS, HIGH BLOOD PRESSURE,  SORENESS/INJURY,  VAGINAL  DISCHARGE,  CHANCROID, DEPRESSION, TUBERCULOSIS, ALZHEIMER , PENIS ENLARGEMENT, VAIN, PARKINSON'S, to get your rid kindly via his email:   drrealakhigbe@gmail.com    contact his number:  +2349010754824           website:  https://drrealakhigbe.weebly.com       you can still write me on Instagram to get more information. on Sarah Morgan 06.