Tragedy and Consequences of Fascism 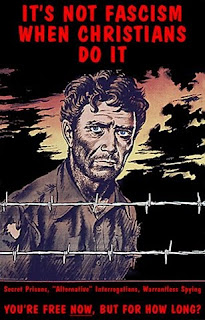 
In the U.S. if you're not rich you're screwed. To top it off, the filthy rich --the ruling "one percent" wants to turn over your social security to the big banks. Americans have not confronted the fact that 'privatizing Social Security' equals giving your money to big banksters, the same big banksters who engineered the last depression. Alas -the GOP scheme to privatize Social Security is either a heist or a gift, depending upon whether your are for it or against it.

With this gift/booty, the big banksters will invest and/or speculate with your monies offshore and international money markets. Not a single job will be created. Not one! Rather --the effect will be the loss of U.S. jobs just as there has been a loss of U.S. jobs under every GOP President since World War II.

I am hard pressed to name a single instance in history when a GOP tax cut or big business tax cut benefiting only the upper classes has EVER created ao much as one job. In fact, the GOP destroys jobs. Every GOP tax cut or other largesse has resulted in declines of both GDP and job creation. To be perfectly clear that is not just a slow down in growth; it is a real decline in job creation itself. Recessions/depressions are even worse. Growth does not merely slow down; rather --economies begin to shrink. Jobs disappear. Economies contract. That any American believes the GOP line dumped on them proves that American education system is a dismal and utter failure --especially with respect to economics.

Texas is the fascist 'lab' experiment which confirms me. Under recent GOP governors, high school graduations have declined. Only corporate prisons benefited from the inevitable rise in crime, most tragically murder and armed robbery.

At the same time, Texas is a nightmare vision of the future that awaits us all. Big corporations have robotized many jobs; the labor movement has been finished since Ronald Reagan waged war against labor and won. Ironically, as jobs became increasingly technical and/or high tech, education, though it has become even more important, declined. The GOP doesn't care. In fact, that was the GOP plan. Sure enough --Texas ranks dead last nationwide in high school graduations. As a result crime --especially murder and armed robbery --has increased.

Who benefits from rising crime?

Another result: Texas leads the nation in executions, a result which the GOP/right wing extremists who run the state seem to enjoy. It's perverted. Who benefits from this epidemic of deliberate incompetence? The corporate run prison system, that's who!

The prisons are no longer run by state. All very high security, high tech affairs, the prisons are owned by huge and growing corporations. They have formed a fascist partnership with Herrs George Bush Sr and his successor Rick Perry, dubbed 'Mr Hair Club for Men' by the late Mollie Ivins. The state lets contracts to their corporate sponsors in the prison business. And what a lucrative business it is! Certainly, with Texas education hitting rock bottom the warehousing of people is a growth industry. Given the 'circle jerk' nature of the Texas government and the corporate prisons, it is reasonable to conclude that the neglect of Texas education is deliberate. It has become GOP policy. Crime is a last desperate resort for increasing numbers who are deprived of education, opportunity and hope! This is Judge Dredd come true. And Texas is the lab experiment.

In the meantime, those landing high paying, corporate jobs persist in their delusions, primarily that they are rich! So they believe! Believing thus, they have assumed huge mortgages for pretentious houses most often behind layers of security --if not moats. This is the case in almost every 'affluent' Houston suburb. I call it modern feudalism but for the fact that feudal 'lords' had a much greater sense of responsibility to serfs. The psychopathic robber barons of Houston do not give a shit! The walls and moats are designed to keep you and the rest of the the riff raff out and, in Houston of late, anyone not among the top 20 percent in wealth and income is riff raff. They have much in common with Scrooge who said: "Let them die and decrease the surplus population!"

The Government's Own 'stats' Indict the GOP

Official stats bear me out. Wealth and income disparities increased significantly, alarmingly under every GOP administration since World War II. The administration of Ronald Reagan was the most blatant 'wealth grab' in U.S. history. Only the top twenty percent benefited from his infamous tax cut. Every other segment became increasingly poorer. A picture of the future was a 'depression' of some two year in which even boom town Houston suffered. Thousands of Houston jobless lost their homes and were reduced to living in tent cities. Many another lived under bridges and overpasses. I saw this for myself.

Bush Jr has apparently finished what Reagan had begun. Now --just one percent of the population owns more than the rest of us combined. Everyone else is losing ground. Should the GOP get control of the nation, that mere one percent will surely shrink yet again, perhaps to just one half of one percent or even less. It's just a matter of moving the decimal place at this point.
This is not what statisticians call a 'normal distribution' curve. It is, rather, an ever steeper curve representing a non-elite class growing exponentially, an elite class whose numbers are increasingly smaller, by now approaching zero. Any point on this curve reveals the rate at which the nation's wealth is literally transferred upward. This is the result of deliberate and official policy. It is, in fact, a payoff to the top 1 percent of the total population.

This is a culture war, declared upon the people by what is often called a 'ruling elite'. Given the trends i.e, the ever shrinking percentage benefiting from robber baron tax cuts, even those currently among the elite should beware. They are next!

Everyone's wealth can be transferred upward to the ever dwindling few. It will be done with the Orwellian use of the term 'tax cut'. Never in history have the results of these 'tax cuts' been so ruinous and devastating. For proof of that see the CIA's own "World Fact Book".

Under Reagan, even boom-town residents (Houston) had been reduced to living in tents. Some never fully recovered economically. I don't even like to think about what new horrors may be inflicted if the psychopaths should continue to dominate American political life.