The Founding Fathers' Revenge: How the People Can Fire George W. Bush 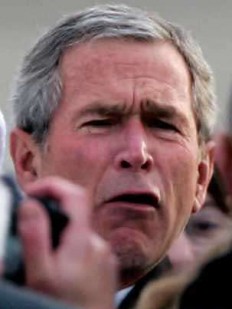 by Len Hart, The Existentialist Cowboy
It's time to fire Bush. There is a way that the people of the United States can fire Bush short of a Constitutional Amendment implementing a recall. And it beats waiting around for the actions of a Congress which enjoys even lower ratings than Bush. The remedy is "revolutionary" —but the best part is that it's entirely constitutional and there is absolutely nothing —within the law —that Bush can do about it. He can but wait for the verdict and pack his bags when he gets it. The "revolutionary" remedy had been foreseen by the founders. It is a new National Convention as described in Article 5 of the U.S. Constitution.

Why this extraordinary measure?

Congress has proven that it lacks the will to impeach though Bush's support continues to collapse. Bush himself expects that it will be left to a successor to clean up the mess he's made in Iraq. If that's the case, then it's better that a successor get started sooner than later. It is ironic that Bush has openly defended his overt usurpation of dictatorial powers even as he presides over the historic collapse of his popular support. How logical is that?

According to SurveyUSA.com, which tracks Bush’s approval ratings in all 50 states, Bush’s support in the March readings plunged to double-digit net negative numbers even in some staunchly Republican states: -12% in South Carolina, -17% in Indiana, -18% in Virginia, and -19% in Tennessee. In Bush’s home state of Texas, public disapproval topped approval by 14 percentage points.

In November, Ted Rall made a compelling case for a national recall of Bush and last week there was some buzz about how a national recall could be effected. Now former Nixon staffer and distinguished author Kevin Phillips (Wealth and Democracy) makes the analogy to California which recalled Gray Davis.

Still, with impeachment losing credibility as a constitutional remedy, the possibility of having an "incompetent" president with a 35% job approval rating in office for almost three more years represents enough of a threat to an unhappy and beleaguered United States that a wide-ranging debate is in order.

Bush's edge is now within the "margin of error” in four of the so-called "red states". His solid support may be down to only three states. That means that since 2004, Bush has lost his margins of from +20% to +46% in those states. Truly historic.

That Bush is losing support state by state makes the "revolutionary" concept of a new National Convention practical. It is the state legislatures that can make a new national convention happen whether or not Bush supports it. He won't support it and it won't matter.

According to Article 5 of the Constitution, two thirds of the state legislatures may petition Congress to convene a national convention.

The Congress, whenever two-thirds of both houses shall deem it necessary, shall propose amendments to this constitution, or on the application of the legislatures of two-thirds of the several states, shall call a convention for proposing amendments, which , in either case, shall be valid to all intents and purposes, as part of this constitution, when ratified by the legislatures of three-fourths of the several states, or by conventions in three-fourths thereof, as the one or the other mode of ratification may be proposed by the Congress: Provided, that no amendment which may be made prior to the year 1808, shall in any manner affect the first and fourth clauses in the ninth section of the first article; and that no state, without its consent, shall be deprived of its equal suffrage in the Senate.

In November, Ted Rall made a compelling case for a national recall. At the time, Rall quoted USA today:

“When a president falls below 40 percent approval in public opinion polls–as President Bush has done twice in the past two months–it’s usually a sign of serious political danger.” —Richard Benedetto, USA Today.

Now Bush's numbers are even worse and more significantly it is not the overall numbers that matter. It's the states! Getting the support of two thirds of the state houses is within reach of a well organized popular movement. Being a creation of the various states, a new national convention is completely outside the Washington bureaucracy. It would be beyond the reach of Bush to intimidate or threaten.

What could a national convention do? A new national convention would have all the powers of the original Philadelphia Convention. According to the late Sen. Sam Irvin of Watergate Committee fame, it could rewrite the Constitution if it wanted to. But a prudent convention need only build upon the framers intentions even though Bush is widely quoted as having said:

The Constitution is just a goddamned piece of paper!

A new convention would put teeth into the Constitution making it clear and un-nuanced so that Bush might understand that it is the supreme law of the land, a lesson he might have skipped at Yale. A lesson apparently not high on the Skull and Bones list of activities.

A new national convention could literally write George W. Bush out of a job; it could, if it wanted to, rewrite the job description, change the title from "President" to something else and set the date for a direct election of the new executive.

It could write strict language binding the new executive to the laws of the land; it could establish severe penalties for violations of the law. Impeachment may not even be necessary. The new national convention could literally form a new government —a velvet revolution. And there is absolutely nothing that Bush could do to stop it unless he is willing to order the U. S. Army to attack it. I don't think even Bush would do that.

A new national convention could put new teeth into the Bill of Rights and could prescribe criminal penalties for egregious violations. A new national convention could eschew the international lawlessness of the Bush regime, withdraw us from Iraq, re-affirm Due Process of Law and the rule of law, and establish new standards of accountability for elected officials and bureaucrats.

Meanwhile, Bush continues to thumb his nose at the Constitution and Congress aids and abets.
We need new National Convention —even if Congress should wake up and impeach. This has gotten serious folks and, if any shred of American Democracy is to remains, we must act. We need a NEW government.

The U.S. Constitution — which these days a lot of Americans sleep with under their pillows — is fairly direct about the relationship between the president and the laws.

"He shall take care that the laws be faithfully executed," it says. There's nothing in there about "if he thinks they're a good idea."

You wonder whether President Bush has ever read that part.

You'd think he has, because that requirement comes right between two duties the president probably finds more congenial: "He shall receive ambassadors and other public ministers" and "shall commission all the officers of the United States." But sometimes you wonder just how deep his constitutional reading has gone.

OPTING OUT OF PATRIOT ACT

Last month, in a White House photo opportunity, the president signed the renewal of the Patriot Act after a year of legislative fights about expanded powers the act gave the government. After negotiating and rewriting, Senate Judiciary Committee Chairman Arlen Specter, R-Pa., proudly claimed to have added significant limits, including a requirement that the administration regularly report to congressional committees about its use of the new powers.

Signing the bill, the president called it "a piece of legislation that's vital to win the war on terror and to protect the American people."

Which didn't mean that he thought the legislation was binding on him.

As the Boston Globe reported last week, after reporters left, the White House issued a statement declaring that the president would ignore the notification requirements if he decided they would "impair foreign relations, national security, the deliberative process of the executive or the performance of the executive's constitutional duties."

So, after a year of congressmen debating what kind of law they should pass, Bush reminds them — as he did after he failed to stop Congress from banning the use of torture on prisoners, as he does by ignoring the Foreign Intelligence Surveillance court when ordering wiretaps — that, after all, the laws don't apply to him. ...

I am weary of allowing this congress to debate permanent changes in the constitution.

Me too! If the Constitution is going to be changed, I want it RESTORED by a popular convention not beholden in any way to the lobbyists, the Military/Industrial complex or the entrenched and corrupt bureacracy.