Callous Frauds, High Treason, and Lies: A Snapshot of the Bush Administration 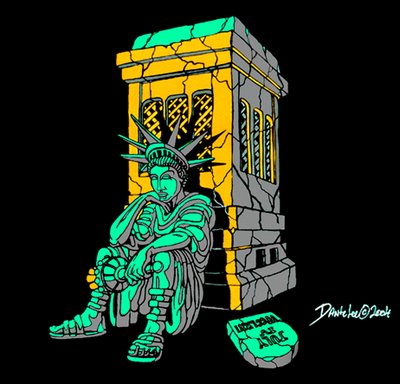 by Len Hat, The Existentialist Cowboy
George W. Bush endangered our national security in the process of covering up a fraud that he and Cheney perpetrated upon America and the world —namely, the deliberate lies told to justify his administration's aggression against Iraq.

This is true whether or not Bush “legally” released the classified information most recently in question in the Plame affair. Bush is obliged to a higher law –that of defending the nation. By exposing Plame and her numerous sources and “operations”, he broke that oath. The technicalities of the leak itself are almost irrelevant. He could be innocent of the leak but guilty is his actions subvert the defense of the nation. He is, then, clearly impeachable.

Bush has shown a careless disregard for the security of the people of this nation, thumbing his nose at the Constitution which he consider just a "...Goddamned piece of paper". Put simply, Bush proved himself willing to compromise our security in order to perpetrate yet another cover story, another fraud.

But, in fact, Bush had not de-classified the information before Plame’s name was already in the media. Bush himself has admitted that he selectively leaked classified information that had not been declassified until several days after Scooter Libby leaked it to Judith Miller. Let’s make this simple: Bush claims that he had the God-like power to make legal crimes that he has already committed.

There are at two big holes in Bush's nonsense. Even if that had been Bush’s “motivation”, it would mean that Bush believed his side of the story ( a lie) was worth compromising national security!

Secondly, even if had not had that effect, it most certainly did not result in a favorable “spin” for Bush. Rather –the opposite. By deliberately blowing Plame's cover, Bush actually proved the lie to his own case for war against Iraq. His motivation was and remains: punishing Joe Wilson for daring to tell the truth about yet another Bush fraud: the reasons for war against Iraq. How many would have known about Joe Wilson if Bush had not decided that punishing Wilson was worth committing high treason? Only the peace movement which, had been, by that time, all but silenced by an apparent conspiracy among “Mainstream Media” kiss ups. Once again a Bush lie told after the fact doesn’t hold water.

As I've previously pointed out, this story is about the quaqmire in Iraq. The Bush case for war was not merely wrong or mistaken. It was a deliberate fraud. Bush has shown himself willing to put American lives in jeopardy in order to keep intact his fraud. One of those lives jeopardized was that of Valerie Plame. Another key point: if the war against Iraq was begun upon a pack of deliberate lies, it was and remains a war crime violating both the Nuremberg Principles and U.S. Codes; Section 2441.

What are the implications of the events that have transpired over the last week or so? Simply this: Bush has lied to the American people yet again! Bush has placed himself above the law and lied about his motivations. Bush has thought his already discredited pack of lies was worth subverting national security in order to get his fraudulent story into the gullible MSM. There are two words for this: high treason!
'Toons by Dante Lee; use only with permission Media Conglomerates, Mergers, Concentration of Ownership, Global Issues, Updated: January 02, 2009

For those people interested there is a terrific interview by Lukery at wotisitgood4 with Laris Alexandrovna (Managing Editor of Raw Story) on: Brewster Jennings, Valerie Plame, Sibel Edmonds, 9/11 and why Dennis Hastert may resign before November. Awesome stuff!