The Bush Regime: A Cancer that Feeds on Itself 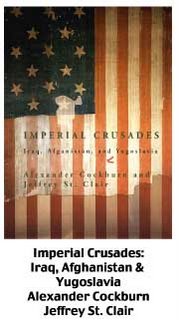 Either despite Bush’s best efforts or because of them, the U.S. invasion of Iraq strengthened Iran and set the stage for an Iran/Shi’ite alliance. Pledging to smash the “Axis of Evil”, Bush has had the opposite effect –creating a radical theocracy in Iraq and an emerging nuclear power in Iran. Now – Ahmadinejad’s speeches to Iranians sound like Bush to Americans.

As the “Existentialist Cowboy” predicted on December 25, 2005, the violence in Iraq increased as it delineated the battle lines between Sunni and Shia. A break up of Iraq is still not out of the question as the Iran/Shia alliance portends a new axis of power in the Middle East. None of these developments had been on the horizon before Bush implemented a failed strategy: pre-emptive, aggressive war.

Would Ahmadinejad have risen to power in Iran had not Bush placed Iran among three nations comprising Bush’s “Axis of Evil”. Probably not!

Would Iran have stepped up its nuclear program if Bush had not bombed and invaded Iraq? Probably not!

Would Ahmadinejad be using Bush-like tactics inside Iran, if Bush had not had such great initial success with it in the United States? Probably not!

Would Ahmadinejad be boasting about joining the nuclear club if civil war underway in Iraq had not strengthened his alliances with the Shi’ite majority in Iraq? Maybe. Maybe not! But it sure makes it more significant.

Who has gained by Bush’s utter incompetence in carrying out an utterly failed, so-called “war on terrorism”? Clearly not the United States which now must somehow deal with the blowback of the most incomptent foreign policy in this nation's history.

Ahmadinejad, meanwhile, becomes the Iranian mirror held up to Bush.

And through it all, a terrible price has been paid for arrogance and incompetence. American losses are now in excess of 2300. Iraqi civilian losses may be greater than 140,000 according to various studies. And there are continuing concerns about inhume treatment of civilians at the hands of the American occupiers. When Bush is removed from office, you can bet that there will be a rising chorus demanding full and truly independent investigations into credible allegations of war crimes, crimes against humanity, and, of course, the war itself –a crime against the peace. And, as long as Bush remains in power, there is no end in sight.
'Toons by Dante Lee; use only with permission
HOME
Posted by Unknown at 8:24 PM

Following 9/11 Iran was all out helping the US to track down al Qaeda. They offered forces in the border regions of Afghanistan and they used their diplomatic contacts to help the US in their dealings with the Afghanis. But the neocons refused these positive diplomatic overtures and Bush demonised Iran as part of the "axis of evil". Iran is not inherently anti US. As you point out Len, the current Iran demonisation program is a policy that can only have a bad end. (The interesting bit is that the State Dept wanted to respond to the Iranians. Bush and the neocons cut them off at the knees. So the program to demonise Iran has been in the policy pipeline all along. It has nothing to do with WMDs.)

This from Jo-Anne Hart: "in which islamic theocracy were there immediate and repeated public outpourings of sympathy for americans following the 9/11 attacks in 2001? If you did not know about the several candlelight vigils in Iran, you are not alone. In fact, few Americans know that hundreds of Iranians gathered publicly to pay their respects and to show their solidarity with the American people, first on 13 September, then in two other vigils. the crowds chanted “Death to terrorism!” “Death to Bin Laden!” and, “America: condolences, condolences!” three days after the attacks, a moment of silence for the American tragedy was held before the start of the World cup-qualifying soccer game, the same day the Tehran Friday prayer leader said the terrorist attacks against america were “heart-rending. . . . everyone condemns, denounces, and is saddened . . . by it.” While note of the candlelight vigils appeared in some Western papers... the US terrorist tragedy is largely unknown here."

Finally, the US has been conducting a ground war in Iran for some time. And they're using a recognised terrorist group Mujahedeen-e Khalq (MEK) to do their dirty work.

None of this a policy for peace or diplomacy.

Damien, again...excellent work. Indeed, the U.S. pissed away the good will it enjoyed in the short weeks following 911. And it is significant that the U.S. is working with the Mujahedeen again. As I recall, the Mujahedeen was how Bin Laden got his start.

Damien - "Afghani" is the name of the Afghan currency, exclusively. Everything else pertaining to Afghanistan, including its people, is termed "Afghan" - just as one doesn't refer to Americans or Australians as "Dollars", one should extend the same courtesy to the Afghans. :)

Thanks rurikid. And don't forget the Grecians!

Is there any sense in what Bush does? Oh, maybe there is. Cents that is, and lots of them. As long as his buddies are profitting from wars and disasters, then Bush has done his job.

Maybe we should call all those who sacrifice for Bush and his buddies Dollars, because that is what we are giving to Bush's buddies. Dollars, and lots of them.

One of the best sources for information about how the GOP put together a ruling oligarchy, I refer you to Kevin Phillips' "American Theocracy". Phillips knows what he's talking about; as a high ranking member of Nixon's staff, Phillips was the brains behind Nixon's "Southern Strategy". But it was not only that. It was also the GOP alliance with religious fanatics and the increasing corporate dominance of American politics on the heels of a Reagan led implosion of American industry that has all but doomed American democracy.