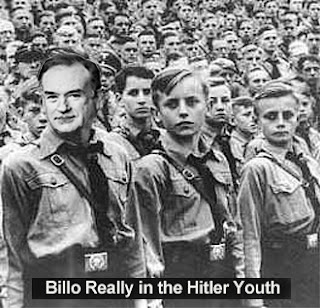 Recently, I posted that the BBC had censored Bhutto's remarks in which she claimed that Omar Sheikh had murdered Osama bin Laden several years ago. There is simply no reason to believe Bhutto misspoke just as there were never compelling reasons to suspect that the various bin Laden tapes were ever authentic. Bhutto's remarks, in fact, tended to confirm numerous reports that bin Laden has been dead for several years. The BBC, however, is not alone in "censoring" Bhutto's references to the death of bin Laden.

On November 2nd, 2007 two weeks after the first attempt on her life resulted in the deaths of 158 people, former Pakistani President Benazir Bhutto spoke with British interviewer David Frost about her plans for Pakistan, the botched assassination and her feelings about working with current President Pervez Musharraf. (In light of her death, this is a difficult video to watch.) In the course of the past few days, however, FOX News has aired short clips from this interview on Special Report. No one - including Frost - seems to have picked up on an astounding claim made by Mrs. Bhutto, namely, that Osama bin Laden is dead. Mme. Bhutto claimed that a man named Ahmed Omar Saeed Sheikh is "the man who murdered Osama bin Laden." With video.

Fox News has a stake in keeping the bin Laden bogey man alive. Fox methods were pioneered by the "yellow" Hearst papers which promised "if you give me the pictures, I will give you a war!"

No intelligent person respects FOX. Fox, therefore, has nothing to lose by editing the news to support an odious, fascist political agenda. The Fox noise machine does this 24/7. We expect nothing else from them and get it.

FOX remains the unofficial propaganda ministry for Bush administration, Fox is the loudmouthed advocate of big corporate fascism, the Military/Industrial complex and any other cockamamie ideology that Rupert Murdoch might happen to puke up.

The "beeb", however, is another matter. The BBC had only its reputation to lose by censoring the Bhutto interview to support an official version of events. An honest news organization should, ideally, have no stake in an official version of events. I challenge the BBC to come forward and explain why it would deliberately omit what is arguably the most important part of Bhutto's interview.

Save The World From Corpruption
Here's a list of Fox News Sponsors to boycott until support for dishonest "news" (propaganda disguised as news) is no more. Write/email letters to these and local sponsors letting them know of your disinclination to buy from them while the shows they sponsor continue dishonest practices.

As a possible example, you could copy and paste the following into the email message after clicking on the particular sponsor link below: This message is to let you know that until Fox News discontinues
unfair practices of blurring partisan political opinion with news and calling it "Fair And Balanced", I will avoid buying products from sponsors of its shows. I have noticed your products advertised on this network. Please let me know if your company plans to continue this controversial support of this unethical practice through advertisements on this network or if I could consider to purchase your products again. Sincerely,

The day she was assassinated last Thursday, Benazir Bhutto had planned to reveal new evidence alleging the involvement of Pakistan's intelligence agencies in rigging the country's upcoming elections, an aide said Monday.

Bhutto had been due to meet U.S. Sen. Arlen Specter, R-Pa., and Rep. Patrick Kennedy, D-R.I., to hand over a report charging that the military Inter-Services Intelligence agency was planning to fix the polls in the favor of President Pervez Musharraf.

Benazir Bhutto: 'People are planning to murder me'

Benazir Bhutto claimed three senior allies of Pakistan's president General Musharraf were out to kill her in a secret email to Foreign Secretary David Miliband written weeks before her death.

Astonishingly, one of them is a leading intelligence officer who was officially responsible for protecting Miss Bhutto from an assassination.

The second is a prominent Pakistani figure, one of whose family members was allegedly murdered by a militant group run by Miss Bhutto's brother. The third is a well-known chief minister in Pakistan who is a long-standing opponent of Miss Bhutto.

Miss Bhutto told Mr Miliband she was convinced that the three were determined to assassinate her on her return to the country and pleaded with him to put pressure on the Pakistan government to stop them.

The disclosure is bound to lead to questions as to whether the Foreign Office did enough to safeguard Miss Bhutto.

Her return was organized in close co-ordination with the UK and US governments, which saw her as the best hope of restoring democracy in Pakistan while preventing it from falling into the hands of Islamic extremists.

Bhutto's Blood Is on Bush's Hands

Over the past year, Musharraf - known here as “Busharraf” on account of Washington's role in propping up his failing dictatorship - has presided over one of Pakistan's most turbulent periods in its 60-year history. While claiming to address extremism, he has instead eviscerated the nation's legal system, curtailed the media and hamstrung civil society, thereby destroying Pakistan's strongest (both institutional and cultural) defenses against fundamentalism. Having twice sacked the Supreme Court's popular and independent Chief Justice and jailed the leaders of the democracy movement, Musharraf has also imposed severe restrictions on the press that continue to stifle debate. In this environment, violence is all too predictable. And the enabling complicity of the U.S. should alarm all observers.

A host of competing theories attempt to explain Bhutto's assassination. The government predictably blamed al-Qaeda within a day, while offering a theory of her death described by BBC as “bizarre.”

Noting Bhutto's prior comments that “elements within the administration and security apparatuses . . . want me out of the way,” members of her family accused the government - either of killing her outright, or for complicity by notorious rogue elements within the government, or at least for offering inadequate security to her campaign - as Bhutto herself alleged before the fact. American authorities have reportedly begun investigating Pakistani special operations forces for their potential involvement.

The BBC claims it has lost the original recordings of its output for the entire day of September 11th 2001. And then there was their reporting on the collapse of WTC7 before it actually occurred (also here and here). Very dodgy.

I had not known about the convenient loss of all the BEEB footage of 911.

Again --great links and thanks.

I agree with you about Fox News. But how weird is this...they are the only American media outlet I could find that reported on December 26th, 2001 that Egyptian and Pakistani newspapers had published articles about Osama bin-Laden's funeral. I would have thought, out of all the media outlets, that Fox would be the last news source to report this and if they did, they would have taken it down by now.

As of today (January 2nd), the Fox News article is still available on the internet.

Well now that IS weird. Not watching or quoting Fox, I missed their coverage of Bin Laden's funeral. I will look for their coverage on the net and beat them over the head with it. Thanks...

You see no reason to believe that Bhutto mispoke? how about the fact that even though the original broadcaster, al Jazeera English, has made no attempt to supress the video - its on their youtube page - they have also made abosolutely no comment or clarification. Wouldn't be confirmation of OBL's death be HUGE HEADLINE NEWS all over the world? For that matter, why did Bhutto since refer to OBL as live? I totally agree that bin Ladin makes the perfect bogey man and that he could be dead - its just that the video is proof of nothing other than Bhutto's ability to mispeak, and Frost and al-jazeera's incompetance in clarifying a very puzzling statement.

Socialist, it WAS a big headline. Even FOX news reported that Bin Laden was dead.

Over the years, there were numerous reports that Bin Laden was dead.

Besides --how does that prove Bhutto misspoke? Take a logic course.

"Mis-speaking" means saying something that you do not intend to say. It has nothing to do with whether or how Bin Laden died.

I happen to believe he is dead. But even if he were alive it does not prove Bhutto misspoke.

This is a stupid issue raised by folk who have an agenda, possibly several agendas. Give it up!

There is no good reason to SUPPOSE that Bhutto misspoke. It remains pure supposition without any verifiable fact of any kind in its support.

Pakistani politician who chaired the Pakistan Peoples Party a

centre-left political party in Pakistan. Bhutto was the first woman

elected to lead a Muslim state,[1] having twice been Prime Minister of

Admiring the time and effort you put into your blog and detailed information you offer! I will bookmark your blog and have my children check up here often. Thumbs up!