What Happened to the American Media? 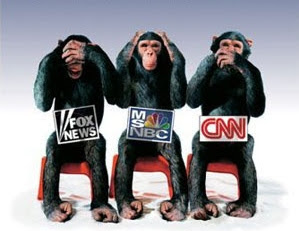 Earlier today I was reading THIS POST at Ice Station Tango and it brought to mind a documentary I saw a couple of years ago on CBC's excellent news magazine The Fifth Estate. I couldn't remember what it was called, but it wasn't hard to find. It's called Sticks and Stones. In short, it's an examination of the 'left-wing bias' exhibited by the US media, focusing on FOX "news", Bill O'Reilly and Ann Coulter. I didn't know that it was available for viewing on line or I would have posted it long ago. Now that questions are being asked about the role of FAUX, CNN, and others in manipulating the American public into supporting policies that have damn near destroyed the country, it is not only still relevant, it is MORE relevant than ever. YOU MUST WATCH THIS!!

What happened to the American Media? After Nixon's demise, the right wing of the Republican party decided that they could no longer afford to allow the free dissemination of information to the US public. The simple solution? Have their friends buy up the major networks, newspaper chains and magazines, so they could be controlled from the top on the corporate level. The Left's Media Miscalculation was to stand by and watch them do it.

"The American Fascist would prefer not to use violence. His method is to poison the channels of public information. With a fascist the problem is never how best to present the truth to the public but how best to use the news to deceive the public into giving the fascist and his group more money or more power."

Having wrested control over the channels of public information, they went on to remove any impediment to their injecting their poisons into the public dialogue. The first step was to get rid of the fairness doctrine.

Under FCC Chairman Mark S. Fowler the FCC began to repeal parts of the Fairness Doctrine, announcing in 1985 that the doctrine hurt the public interest and violated the First Amendment.

In 1986 the Court of Appeals for the District of Columbia Circuit upheld a loose interpretation by the FCC of an aspect of the Fairness Doctrine, ruling that Congress had "never made the doctrine a binding requirement." In August 1987, the Commission abolished the doctrine by a 4-0 vote, in its Syracuse Peace Council decision. The FCC insisted that the doctrine had grown to inhibit rather than enhance debate and suggested that, due to the many media voices in the marketplace at the time, the doctrine was perceived to be unconstitutional.

In the spring of 1987 Congress attempted to contest the FCC vote and restore the Doctrine (S. 742, 100th Cong., 1st Sess. (1987)), but the legislation was vetoed by President Reagan. Another attempt to resurrect the doctrine in 1991 ran out of steam when President George H.W. Bush threatened another veto. (Wikipedia)

The next step was to further remove any requirement that a "news" show tell the truth. FOX and a number of other "news" organizations took it to court in an elaborate and complicated case that began in 1996 with an investigative report into the effects of a Monsanto product given to dairy cows called BGH. Jane Akre and her husband, Steve Wilson were reporters at FOX affiliate WTVT in Tampa Bay, Florida. They produced a story that, while true, was not exactly friendly to Monsanto.

"The station was initially very excited about the series. But within a week, Fox executives and their attorneys wanted the reporters to use statements from Monsanto representatives that the reporters knew were false and to make other revisions to the story that were in direct conflict with the facts. Fox editors then tried to force Akre and Wilson to continue to produce the distorted story. When they refused and threatened to report Fox's actions to the FCC, they were both fired."

A wrongful dismissal lawsuit was filed by Akre, which she won.The jury unanimously ruled that she was only doing her job as a journalist by refusing to air “a false, distorted or slanted story.” FOX appealed, and the result was stunning. "During their appeal, FOX asserted that there are no written rules against distorting news in the media. They argued that, under the First Amendment, broadcasters have the right to lie or deliberately distort news reports on public airwaves."

On February 14, 2003 the Florida Second District Court of Appeals unanimously overturned the settlement awarded to Akre. The Court held that Akre’s threat to report the station’s actions to the FCC did not deserve protection under Florida’s whistle blower statute, because Florida’s whistle blower law states that an employer must violate an adopted “law, rule, or regulation." In a stunningly narrow interpretation of FCC rules, the Florida Appeals court claimed that the FCC policy against falsification of the news does not rise to the level of a "law, rule, or regulation," it was simply a "policy." Therefore, it is up to the station whether or not it wants to report honestly.

Well, not wanting to resort to such an obvious pun, I am unable to avoid it. 'It is up to the station' sounds to me way too much like putting the FOX in charge of the hen house. [insert groan here]

Having got the media under their control, and the law out of the way, the right wing media bandits were and are well equipped to launch whatever attack on the truth they pleased. Looks like they've done pretty well so far. This recent Glenn Greenwald piece is a case in point. Calls to Investigate Media's Pre-War Behavior - yeah, getting the country to agree to an unjustified, unnecessary, and extremely expensive war is, I would say, a pretty good shakedown of the system's effectiveness. Now they're probably trying to change the rules so that calling a tail a leg really makes it a leg. Then we'll really be in trouble.

Seems GOPper influence is dwindling as the influence of the MSM(still powerful in the manufacturing the consent of Jung's 30%) wanes and the power of the internet as on opinion shaper steadily grows.
---------------------

IN BRAINS WE TRUST

BillO Beavis, Rush Butthead, Yup-Yup Palin, Bobby “The Exorcist” and Turd B. Rover are having a few quiet beers in a “Members Only” D.C. titty bar as they ponder the future of the Party of Lincoln whose legacy had recently been purloined by an uppity, queue-jumping, community organiser from Chicago’s Southside.

The Exorcist: Why thank you, Rush, having that nationwide network audience was awesomely exciting. I needed to make an impression.

BillO: Guys, what the hell is happening to the GOP? It’s almost as if god-fearing, patriotic Americans are not listening to us anymore… since that…..that upstart burst from the political woodpile!

Yup-Yup: Would it help if we just said no to bounties on wolves and to sex education in schools? (winks involuntarily while turning her head slightly to the right.)

Rover: None of this woulda happened when Lee Atwater was running things….

(without warning a squad of heavily armed FBI agents enter the establishment and approach the former W.H. deputy CoS)

Agent: Step away from the bar, sir! Place your hands behind your head!
Karl Christian Rove, I am arresting you for Contempt of Congress of the United States of America. Anything you say will be used……….


Now that's the kind of fucken change I can BELIEVE in!!

What happened to the American Press was, in a word, "consolidation."

It was bought up, milked and combed for every dollar, sucked dry, reduced to 'shoppers,' and it will shortly be resold, a shattered, empty husk, unable to investigate its own restrooms.

That was the plan.

The "press," the newspapers of the nation, were the only entitiies with sufficient resources and (occasional) independence which could actually investigate the doings of other large (business and government, to the extent that they can be distinguised) entities. So they had to be silenced...

And they were. Five corporations now own or otherwise control around 80% of all US media outlets.

What happened to the US Press?

It was dinner for the Raygunaut bloodsuckers.