How the GOP Pays Off its 'Base' of Elites 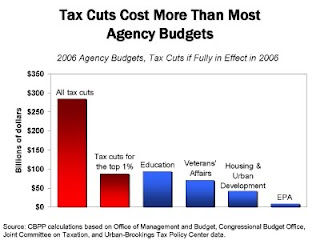 When more and more have less and less to spend, what is an economy to do but shrink? Economists call it 'contraction' but by any term, it results in recession/depression.

When workers are not FAIRLY compensated for their labor and productivity, the income and wealth inequalities that result lower GDP and official INDICES measuring the national standard of living. This has been the case following every GOP tax cut.

GOP tax cuts either bribe or pay off the shrinking class of ruling elites that currently make up just one percent of the US population. This class of ruling oligarchs owes its existence to Ronald Reagan's infamous tax cut of 1982 which initially benefited the upper quintile. Subsequent tax cuts have enriched this class even as the percentage benefiting has shrunk --from 20 percent to just one percent. Every member of this class should be asking themselves: when do I fall off the bottom rung?

Indeed, that the world's millionaire's are decreasing in number does not mean the wealth is being equitably distributed. Rather --the reverse. Millionaires are decreasing because total wealth is decreasing even as the super-super rich, the ruling elite increases their share.

The number of millionaire households in the world dropped from 11 million in 2007 to 9 million last year, a fall of almost 18%, according to The Boston Consulting Group. The figure was worse in North America where the drop was 22%.

The world’s wealthy are getting poorer and poorer at an alarming rate.

The rich seem to have joined the middle class on the metaphorical bread line, which is not good news for developed economies that are counting on consumer spending to help drive GDP growth rebounds. The wealthy may buy different goods and services than the middle class do, but their share of overall purchasing power is tremendous. What has been described as a “jobless” recovery is becoming a “wealthless” recovery as well.

The erosion of personal wealth matches the erosion of wealthy pools of capital. Harvard and Yale announced that their endowments dropped by more than 25% during their fiscal years which ended June 30. These institutions are clearly no better at managing their money than people in the top tier of the economic scale are.--The World’s Millionaires Are Disappearing

Unless trends are reversed and unless the world economy crashes and makes paupers of all us, the number of billionaires will one day decrease as a handful of trillionaires claim world ownership.

As a result of GOP largesse, this 'ruling' elite of just one percent owns more than 95 percent of the rest of us combined. Clearly --everyone not a member of this class amounts for very, very little among the leadership of the GOP. The US 'ruling elite' have become oligarchs. Bush Jr said: 'You are either for us or you are agin' us'. Surely, he had his base in mind. He waged war on their behalf just as Rome waged war to benefit the nobles, as Rome had invaded Dacia for the gold! If you are not 'elite', you are, like most of us, among the ass-kissin' paupers. Revolutions have begun upon less cause! GOP inequities depress the economy.
Deficits Caused by Tax Cuts Negate Any Potential Economic Benefits

Studies by the Joint Committee on Taxation (JTC), Organisation for Economic Co-operation and Development (OECD)and the Congressional Budget Office (CBO) confirm the common sense conclusion that GOP deficits undermine the alleged economic benefits of GOP tax cuts. The so-called Laffer Curve is crap! Arthur Laffer drew a HYPOTHETICAL curve in which additional revenues would be derived by cutting taxes for the 'investor' class. The curve is said to have shown how by cutting taxes for an 'investor' class, the increased investment thus stimulated would increase both employement and GDP while reducing federal deficits in the bargain.

Reagan's tax cut of 1982 put Laffer to the test and his curve failed miserably. GDP did not increase; rather, a depression of some two years --the longest and most severe since the Great Depression --resulted! It was accompanied by massive job losses and homelessness. Tent cities sprang up in boomtowns like Houston. GOP Tax Cuts For Cronies Cause Recessions Recessions and depressions have followed every GOP tax cut. It has been said that if you charge too much for something you will make $0 and if you charge too little --same thing. That thought process may apply to a small manufacturer; it does not describe or predict the effects of US tax policy. It is, rather, a simplistic demand curve --not the Laffer Curve which presumed to predict the effect of tax cuts. It was --in fact --a baseless rationalization for making the rich even richer. Politicians saw in it the perfect cover, a way to 'launder' a pay off to the base! 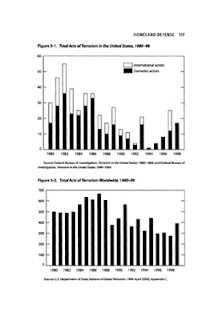 Aside from inflicting upon the US economy what may yet prove to be a mortal blow, Unca Ronnie sold arms to Iran, an avowed enemy of the US. Alone, that is treason as defined by US Codes. But Reagan was not done. He funneled the proceeds to a right wing insurgency in Nicaraugua. All 'off the books'. Reagan arranged billions of dollars in unreported loans to Saddam Hussein for the purchase of military tech. [See: Lawrence Walsh, Iran-Contra Report, Concluding Observations]

Later, Bush would accuse Saddam of having WMD! Who but Reagan, the US in general, could have have armed Saddam? If WMD had been found, what are the chances that they would have come from any other nation BUT the nation that has sought to arm insurgencies all over the world --not in defense of Democracy but in defense of a US ruling elite of just one percent of the total population! Weapons for his oil was surely a part of the 'sweet deal' GOP regimes cooked up with Saddam Hussein.
Reagan removed Iraq from the list of known terrorist nations in 1982 despite objections from Congress. A bargain had been struck!

Defense contractors, the de facto enforcement arm of the GOP, shipped helicopters and howitzers to Baghdad in the 1980s, even as the U.S. Dept. of Commerce gave its stamp of approval to the shipment of weapons-grade botulin poison, anthrax, nerve agents and chemicals needed for mustard gas. If WMD had been found in Iraq (they were not), chances are, they would have been traceable to either the Senior Bush or Unca Ronnie Ray-guns, terrorists of the GOP brand!
Until Bush Jr, Reagan had been the very worst President in US history. Bush Jr was not to be outdone. Both idiot-criminals enriched just just one percent of the US population --robber barons, insiders and arms merchants who were already rich. Under both so-called 'Presidents', every one but the very, very rich got poor! The middle class was left behind and falling off the bottom rung. Surely, you figured that out when you tried to re-finance your big house recently. OFFICIAL STATS from the Census Bureau, the Bureau of Labors Statistics and the US Commerce Dept et al prove conclusively that the age of US egalitarianism ended with the rise of Reagan Republicanism. It's all been downhill for America since then. You can thank the GOP.
Posted by Unknown at 4:31 AM

The party of NO (NO class, NO ideas, NO assistance to anyone other than the super-rich) screams bloody murder over the projected $1 trillion cost of health care reform. What is conveniently left out of the conversation is the fact that the Bush tax cuts have cost more than double ($2.11 trillion) in lost revenue.

Excellent point! Depressions are often characterized as 'contractions' of the money supply. What economy can sustain the LOSS of some 2.11 TRILLION dollars.

WHERE -in GOP regimes --does money go? It might as well have been thrown upon a bonfire!

I am by no means an economist, but in my view the solution to our financial woes seems pretty straight forward:

1. Rescind the Bush/GOP tax cuts for the wealthy. A return to FDR type taxation is obviously too much to hope for, but I can live with this as a small first step.

2. End the wars of naked aggression in Iraq, Afghanistan, the one spinning up in Pakistan, and the one threatening to happen with Iran. Since Afghanistan and especially Iraq were based on bald-faced lies (a grab at energy resources/transport would be closer to the truth) they are illegitimate and illegal.

Were these two steps to be taken, our deficit would shrink rapidly, the Dollar would be pulled back from the brink, and as an added benefit, the US could regain some of it's lost stature among the international community.

Forgive me if I don't hold my breath. The GOP, having caused this slow-motion train wreck, will never take ownership of it. Rather, the old and tired projectionist rhetoric will continue to flow copiously from their lying pie holes. Likewise, I find myself unable to give the Democrats a pass on the matter. Having a majority in both houses of Congress, and the White House, doesn't seem to be sufficient motivation to grow some balls.

A bright spot in the scenery is the seemingly growing frustration of the Dems, particularly on the health care issue. The chorus of discontent grows louder with each GOP stalling/obstructionist tactic; the call to get it done, with or without the rethugs, is something I've waited for since the Carter administration.

"WHERE -in GOP regimes --does money go? It might as well have been thrown upon a bonfire!"

To the same place the bank bailout went, all those redacted names are off shore, multi-national banks. Treasury Secretary Henry Paulson said the redacted names were to protect the economy (read banks) from financial panic (read bank run). The liquidity was sucked up so the wealthiest maintain their unsustainable lifestyles, buy another yacht, or an island, or a vaction home, while the rest of us see our hopes for any kind of reasonable standard of living or a retirement go down the drain. I expect to die on my job, using a cane to get around on and in debt to the banks and pharmaceutical companies.

Meanwhile. the pin-striped bandits, banksters and politrixters have absolutely looted and layed economic waste to this country. Our country's founding fathers would have already been in the streets with a fresh batch of tar and feathers.